Swelly had a robust following after only a week.

It was about two months ago that our team at Swell first thought bots could be an interesting space for us. We’ve always thought of Swell as a multi-platform social network that needs to be accessible wherever the user needs help with decisions. Our long-term vision is creating technology to empower people to make those decisions.

That might mean finding the perfect restaurant for a date, locating a rental car in your area, putting together a great outfit for tonight, or deciding which app logo is better for your product. The Swell community answers any questions within seconds and lets you ask your friends, a public community of educated users, or community experts, depending on your current needs.

The story behind Swell

I came up with the idea for Swell while I was operating fashion stores back home in Austria.

A lot of people left our stores without buying anything, so, as a store owner, I needed to find out why.

It turns out that the number one reason people leave a store without buying is that they are indecisive. Forty percent of the people we talked to (mostly teenagers and people in their early 20s) told us that they couldn’t decide and that they don’t trust the opinion of shopkeepers, as they are likely biased.

With the Swell app, we created the simplest possible experience to solve this problem faster than current solutions (like messaging apps).

We launched the Swell app six months ago on ProductHunt.

However, since we were in the app game and had worked five months on growing an audience for our native apps, we first thought of bots as a new marketing/user acquisition channel. So we built Swelly for Facebook Messenger and launched it on ProductHunt with the idea of bringing free traffic to the bot and then doing as much as we could to convert bot users to app users.

We put a lot of effort into this, including adding “download app” buttons and figuring out which smartphones users have.

Problem is, this approach kind of destroyed our smooth user experience. Swelly had some nice early traction, and we soon realized that our bot can be a fully functional — and standalone — platform connected with the app community, and it was definitely more than just a user acquisition channel.

After our first month, I want to share some numbers with you (provided by BotMetrics):

How we took advantage of the platforms

Messenger has a massive audience, a weak explore function, and a lot of data!

The great thing with Facebook is the massive audience it potentially provides for a bot. The downside here is that it’s not so easy to explore bots within Facebook Messenger.

It took us three weeks to make it to the top results on Messenger’s Search function. Since we hit that, however, it’s been driving some really nice traffic (1,000-3,000 new organic users per day). 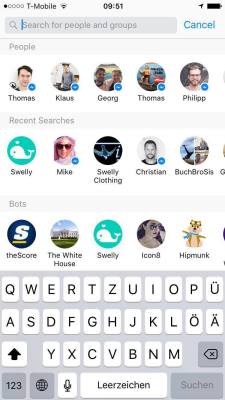 The best thing about Facebook Messenger is the data you can collect. Messenger gives you the user’s name, profile pic, gender, location, time zone, and more.

Besides the obvious benefits of getting more user data, this lets us make our feed more personalized and helps us send smarter notification-style messages to remind users to come back.

Kik has a great explore function, is weak on data, but is the perfect audience for Swelly

Kik and its Bot Shop make it easy to explore new bots and have helped us build an audience from day one. Right now, we are #4 in the Entertainment category, so every Kik user sees us first when opening the Bot Shop. 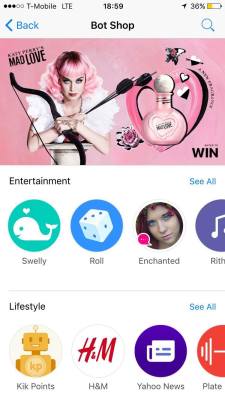 Above: Kik is a perfect match for our users.

Another great thing about Kik is its team. They are very accessible, super responsive, and help as much as they can when it comes to technical problems or even just chatting about how to build a perfect user experience.

The only problem with Kik is that it gives you very little data — basically just a username and a profile picture. Pretty much all the rest needs to be collected later with smart questioning.

The cool thing here is that Kik has a young audience. Teenagers and users in their early twenties are a perfect match for us, and they are eager to provide data to get a better feed.

Telegram: This platform has a great interface, but Telegram doesn’t give you a lot of data, and it’s not really a good match for us in terms of target audience. 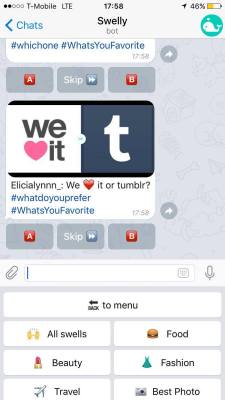 Above: Telegram was not a great match for our bot.