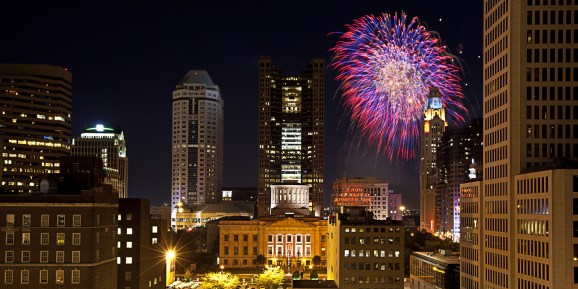 Four years ago, I was a partner at Sequoia Capital, where Drew Houston, Brian Chesky, and a daunting parade of dent-making founders routinely proved that disruption happens in Silicon Valley like nowhere else. But things were changing, and fast.

We saw cloud access to cutting-edge technology sprout fast-growing companies in geographies far away from our epicenter. We, in fact, came to believe (as I still do today) that while the majority of the value in technology was built in Silicon Valley over the last 15 years, a disproportionate amount of the returns over the next 15 will be built elsewhere.

At Sequoia, we took to running around the world, opening offices and funds in India and China. We were investing in Sweden, Brazil, and Scotland. We were, by the way, the firm that was at one time known for only investing within a bicycle’s ride of Menlo Park.

Given our scope, it was not even notionally possible to me that we might be overlooking the opportunity of our lifetime.

But a conversation with my friend and Sequoia colleague Mark Kvamme changed that.

In 2012, Mark was on sabbatical in Columbus to help John Kasich. When I finally came to visit, Mark and I chatted for awhile, but he cut quickly to the chase. “Let me introduce you to my new friend,” he said.

We were in downtown Columbus. We walked a short distance and took an elevator up to the 12th floor of a largely vacant skyscraper. It looked to the naked eye like there were more bail bond businesses than technology startups.

We walked through a non-descript door into what immediately felt like any startup in Silicon Valley. It was an open floor plan with flat screen monitors displaying the key metrics of the business in real time.

There were no offices. All four of the employees were engineers sitting at glass write-on Ikea desks, coding their next release, headphones atop their heads. They even had the vacant desk at the entryway where the “receptionist” sat. There was no receptionist in truth, but CrossChx wanted to look big-time for their meeting with Sequoia, I later found out.

Over the next hour, CrossChx founder Sean Lane proceeded to tell us his story, about how he had scraped his way from one of the poorest towns in Appalachia into the Air Force, and how he came to lead an elite unit of the NSA. He also had a friend suffering from prescription drug abuse and was now on a mission to use what he had learned about technology in the military to raise the life expectancy of America by 10 years by solving the medical identity problem once and for all.

Sean laid out a very compelling business plan, showed us his “patent portfolio” (it was literally a folder filled with pictures of General Patton), and within 60 minutes I was hooked. Sean and his team had accomplished a whole lot on very little, and yet they were thinking as big as any company I’d met during my time at Sequoia.

My immediate reaction was: “Sean, you’re really onto something. This is a huge opportunity. You need to move your company to Silicon Valley.”

I proceeded to give Sean the typical pitch, parroting what every VC out there argues.

Sean turned to me and said, “You’re wrong.”

What? No I’m not. The Silicon Valley pitch isn’t wrong. Google, Facebook, Oracle, Cisco, and many others all prove I’m right. I’m right. Right?

When I walked out of the CrossChx office, my mind was racing. Is he the only one with a startup that makes more sense to build in the Midwest than in Silicon Valley? Surely, Sean is an outlier. Let’s not get ahead of ourselves.

Mark had the same reaction. We concluded that if Sean was unique, there was no question. I should go back to California and continue my career in Silicon Valley. But if Sean was just one example of the types of founders and the types of companies emerging in the Midwest, we couldn’t afford not to take a closer look.

We set off on a major research endeavor to see what conclusion the data supported. Mark and I were both trained by the very best in our business to build strong, well-evidenced theses.

Surprisingly, every piece of macroeconomic data suggested Sean personified just one of thousands of opportunities across the Midwest, and that the raw ingredients for bold, ambitious new companies were more plentiful here than in Silicon Valley.

California is the eighth largest economy in the world. The Midwest is the fifth. The Midwest is also bigger than Brazil, Russia, and India, each of which had recently caught many a venture capitalist’s eye.

And if you want to see such opportunities in real life, go visit any Midwest city and tell me what you find. One of the places we investigated in great depth was Ann Arbor.

Ann Arbor is a relatively unremarkable Midwest town of 113,000 people when school is in session. It is hardly a bustling metropolis, yet it is representative of a typical Midwest town and what makes the region so special. Ann Arbor is potent. To say the least, we were again surprised by what we found.

With a modest amount of effort, we met Duo Security, Farmlogs, Notion, Deepfield, and Llama Soft. These five companies alone currently account for 783 people in Ann Arbor building startups. AngelList today claims there are 296 companies there, and if you go to the University of Michigan campus, you will find a few hundred more seed stage companies quickly emerging.

“The next great venture firm will be built in the Midwest,” Mark concluded. And the first time I heard those words, they scared me.

But the more I looked into the potential of the Midwest, the more my fear turned into genuine intrigue. Instead of ruling something out, I could feel myself getting reeled in. If the macro data is there, and Ann Arbor has this much going on, I thought, what would we find when we looked in Columbus (800K people), Pittsburgh (home of the leading computer science school in the world, Carnegie Mellon), or Chicago (recent exits include GrubHub $3.2 billion of value, OptionsExpress $1 billion of value, and Cleversafe $1.3 billion of value)?

Everywhere we looked, the data supported our conclusion that today entrepreneurs are building more billion-dollar companies in the Midwest than in the last 50 years combined.

The answer, we concluded, had everything to do with timing. In the first few decades of the Internet, you had to be physically close to your technology. That technology, the talent that built it, and the ecosystem that maintained it was in Silicon Valley.

We left Sequoia and took this pitch on the road in 2013 and were fortunate enough to find $250 million of commitments to support our first fund. We remind ourselves every day that those first investors are the people who put us in business. They bet on the region when it was far less apparent than it is today what’s possible.

The number of firms spending time in Columbus this quarter alone can tell you that Mark and I were early, but not that early. Colleagues on the coasts, I think, were astonished to learn how quickly and effectively we were able to put that first $250 million to work. Everyone, I think, assumed we’d be chasing our tails for awhile. That has been anything but the case.

In fact, in the coming week we will be formally announcing a second, even larger fund to invest in world-changing, category-defining companies based in the Midwest or eagerly moving here.

It’s funny. Now I’m giving the opposite of the tried-and-true Silicon Valley location pitch, and far more frequently. Moving to the Midwest dramatically increases most companies’ odds of success. And yes, people are really moving. In droves.

So what have we learned since we started Drive Capital, and what is different in Fund II? Three things stick out.

1. This is happening. The market is here now. In our first year, we saw 1,800 companies. Last year we saw 3,500 (to put that in context, Marc Andreessen says they see 4,000 each year). There are plenty of investment opportunities in the Midwest, and they are on par with those found in other geographies.

2. Sean Lane is not alone. We routinely meet dent-making founders working to change the world. Founders here have ambitions as aggressive as anyone you will meet anywhere. They tell us they are building “the next phone company,” “technology that will augment the world’s food supply,” or “SaaS that is the reason Obama won the last election.” If you think people in the Midwest don’t have the vision and the grit necessary to change the world, you’re wrong.

3. There is a disconnect between perception and reality. Every time we go to the coasts, we hear the same old reasons why the Midwest won’t work for startups. I have yet to see anyone validate these claims with data. In fact, every piece of information we find confirms the contrary. When people take the time to see what is going on out here, they stay for the opportunity. But they have to come and see it for themselves. You have to actually land.

It is only a matter of time until Midwest cities surpass recent emerging venture cities like Shanghai, Stockholm, and Mumbai to rival Silicon Valley.

Again, there are more entrepreneurs building billion-dollar companies in the Midwest today than in the past 50 years combined. Think about that. These entrepreneurs have together created an engine of growth that will shape and reshape the US economy.

Look, we realize our thesis runs counter to popular beliefs held on the coasts. But what if we’re right?

Chris Olsen is cofounder and general partner at Drive Capital.