In a wide-ranging ruling, the European Commission detailed how Apple used its Ireland operations to massively reduce its taxes for more than a decade.

Commissioner Margrethe Vestager, who is in charge of competition policy, held a press conference Tuesday condemning Apple in strong language for creating a structure that allowed it to dodge $14.5 billion in taxes.

Both Apple and the Irish government continue to deny the allegations and have said that they will appeal the decision. In a statement issued today, Apple said it “follows the law and pays all of the taxes we owe wherever we operate.”

Still, over the course of the presentation, Vestager laid out a structure that the EC clearly believes was designed only for the purpose of cutting Apple’s tax bill.

“Illegal state aid harms competition,” she said. “It’s unfair. The ultimate goal should be to pay taxes where they generate the profit.”

The EC began its investigation in June 2014 and found that two tax rulings made by Ireland allowed Apple to artificially lower its tax bill, going back to 1991.

According to the EC, Apple created two entities in Ireland: Apple Sales International and Apple Operations Europe. These entities then assigned almost all of the company’s international profits to a “head office” that was not subject to any taxes.

“The so-called ‘head office’ only existed on paper,” Vestager said. “It has no employees, no real presence, no real activities.”

Citing one example, the EC noted that in 2011, Apple Sales International posted profits of $22 billion, but only $67 million were counted as having to be taxed. The rest was untaxed, leaving Apple with an $11 million tax bill.

As such, Apple’s effective international tax rate fell from 1 percent in 2003 to .005 percent in 2014. According to Vestager, this meant that for every 1 million euros in profit, Apple only paid 500 euros in taxes, a rate that dropped to 50 euros by 2014. (The tax arrangement was subsequently terminated after the EC began its investigation.)

Both Apple and Ireland have insisted that they believe they were operating within the law. But Vestager dismissed that explanation out of hand, noting that the rate was far below Ireland’s official corporate tax rate of 12.5 percent.

“Splitting the profits between these entities did not have any economic or financial justifications,” she said. “If my tax rate fell to .005 percent, I would think I need to have a second look at my tax bill.”

While Apple’s Sales International and Operations Europe did pay taxes, they also managed to reduce their bill under an arrangement with the U.S. corporate parent. The two entities paid a fee each year to Apple’s research division to conduct research, a fee that it could be deducted from profits as an expense. In 2011, this fee was $2 billion, and it increased “significantly” in 2014, according to the EC, to the point that it accounted for about half of all the money Apple was spending on research. 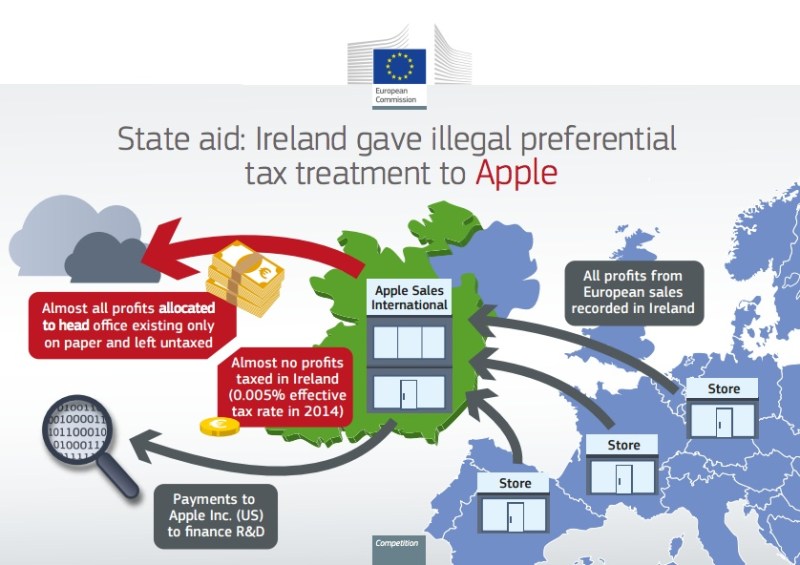 Apple will no doubt fight the ruling hard, given not only the financial stakes but also the potential hit this ruling could deliver to its corporate image. The U.S. government has also hinted that it could take retaliatory measures against European companies if it felt the EC’s actions were excessive.

That said, the decision could be only the beginning of Apple’s headaches. Vestager noted that the Irish operations booked revenues for Apple’s operations across India, the Middle East, Africa, and Europe.

It could be possible that Apple should have been paying taxes in each of those countries and regions rather than consolidating them all in Ireland. Vestager said the EC would share all of its investigatory data with any country that believes it might have a claim to taxes from Apple. Any additional taxes Apple has to pay elsewhere, including in the United States, would reduce the $14.5 billion it owes Ireland.

Vestager also made it clear that the EC’s intention was not punitive but was rather to ensure that all companies have a level playing field so fair competition is protected.

“This has to do with profits generated in Europe and recorded in Europe,” she said. “This is not a penalty. It’s unpaid taxes to be paid.”

Even as Apple and Ireland fight the ruling, the two must negotiate over how and when the payment should be made. Vestager suggested that the money may have to be put in an escrow account where it would sit until appeals are exhausted.

Moving forward will be tricky for Ireland, which has used tax deals to paint itself as an attractive haven for tech companies. On the other hand, the government faces a large national deficit, and a windfall from Apple could help reduce that.