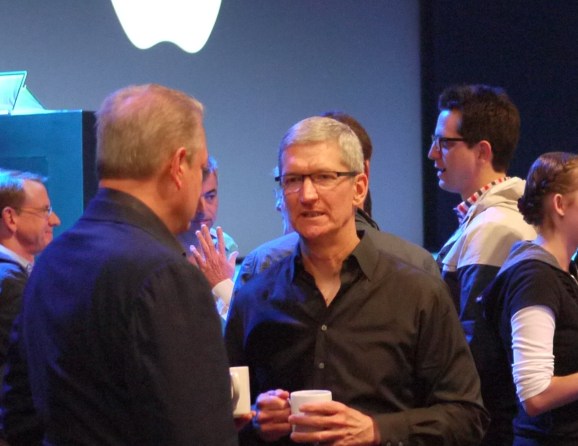 In an interview on an Irish public radio station, Apple CEO Tim Cook again denounced the European Commission’s ruling that his company had dodged $14.5 billion in taxes and said Apple would begin moving its profits back to the U.S.

Cook said Apple will repatriate billions of dollars of global profits, starting next year, though he did not specify exactly how much the company would return. As of last April, Apple had more than $181 billion in profits held outside the U.S.

In the past, Cook has said he’s resistant to bringing that money back because the company would have to pay up to 40 percent in federal and state taxes on it. Cook did not say whether the company would now pay those full taxes on whatever cash is repatriated.

However,  while waxing nostalgic about the long relationship Apple has had with Ireland, Cook elaborated on the defense he laid out in a letter to customers published earlier this week in the wake of the EC ruling.

Cook said Apple had paid $800 million in taxes on profits in 2014, split roughly between Ireland and the U.S. It’s unclear whether moving those profits back to the U.S. would reduce the company’s Irish taxes.

In stern language, Cook said that the EC ruling was politically motivated and “wrongheaded and not true. There wasn’t a special deal between Ireland and Apple.”

At a news conference on Tuesday, the EC’s commissioner for competition, Margrethe Vestager, detailed the way Apple’s tax strategy in Ireland had worked. The EC said that in terms of its international profits, Apple had created a phony company that allowed it to reduce its tax rate on most of its profits to .005 percent, at one point.

Vestager had dismissed the notion that Apple and Ireland could genuinely believe such a low rate was within the bounds of the law.

“Splitting the profits between these entities did not have any economic or financial justifications,” she said. “If my tax rate fell to .005 percent, I would think I need to have a second look at my tax bill.”

Cook responded by pointing out that on a global basis, the company had paid a tax rate of 26.1 percent. And he added that Apple pays $1 out of every $15 of corporate tax collected in Ireland. He said he feels the company is paying its fair share.

Apple is planning to appeal, and Cook said he hopes the Irish government will do the same.

As for repatriating the company’s profits, it will be interested to see the details when they emerge. The growing pile of offshore cash held by U.S. corporations has been a politically charged issue for years, with some calling for a tax holiday to encourage these corporations to bring the money back.

If Apple were to bring its profits back and pay the full amount owed, that could put pressure on other companies to follow suit. Likewise, if Apple has found a way to bring the money back and avoid the hefty taxes, the company’s strategy will likely be copied by others.