Each week we bring you bots we think are interesting for one reason or another and are worth the time to try out.

Last week we looked at a DJ’s bot and a Shakespeare bot that insults people. This week we take a look at a bot that teaches languages, one that helps you write on Medium, and Magic Eight bot.

Got any ideas for bots we should feature in this weekly roundup? Email khari@venturebeat.com or ping @kharijohnson on Twitter.

This bot functions only with a web browser for now. It’s simple but the best part about this bot is that I actually got to see it get better.

Also sort of impressive and sometimes overlooked by FAQ bots — bots that incorporate the sort of frequently asked questions businesses hear — I’ve seen in the past: Medium’s bot can answer the question “What is Medium’s mission?”

Medium’s bot doesn’t have that same oversharing, sort of cerebral, kind of self-promotional voice you often find in Medium posts. Maybe that’s a good thing when this bot’s purpose is to get you a helpful answer as soon as possible. Overall this bot is pretty simple, it answers most of my questions, and gives me a way to contact the company if the bot fails to answer my question, everything a FAQ bot is supposed to do.

Last week in a story about the lack of a Facebook Messenger bot store, Messenger product manager Seth Rosenberg told us about how Messenger features bots on the Messenger iOS app. Roughly 20 of more than 18,000 bots made so far are featured on the app, based in part on retention and engagement rates and what Messenger staff wants to highlight. 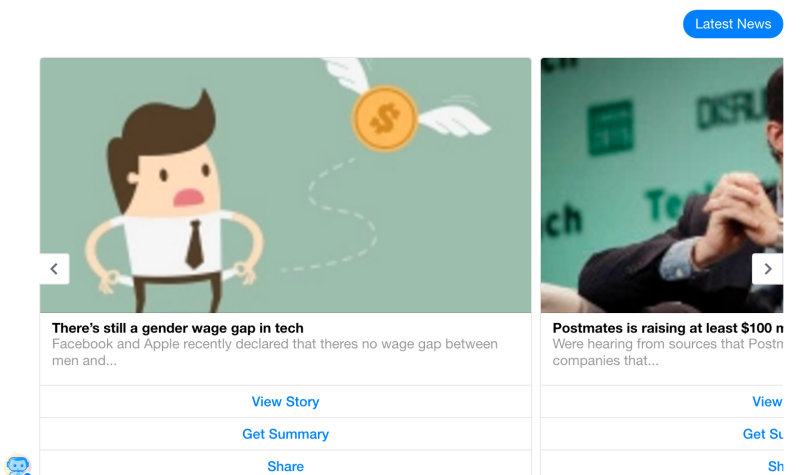 Hi Startups was one of those featured apps Tuesday, and to be honest, I’m a little perplexed as to why this bot made the cut. The bot shares two things with you: Latest articles, which come from a variety of sources, and Latest news, a carousel of a half dozen stories entirely from TechCrunch. All information offered by Hi Startups can be obtained by reading the front page of any tech news website or RSS feed, so I don’t see a lot of value here.

What could set Hi Startups apart is curation. Curation and the voice of the writer are what make newsletters stand out and the same appears to be true of bots. Unfortunately this bot has no voice. Today, it’s just a list of links. Don’t waste your time on this bot.

Mondly teaches more than 30 different languages. Lessons are taught with a combination of visuals, swiping up and down, and drag-and-drop. When you’ve got some knowledge under your belt, you can speak to the Mondly bot to practice your skills.

This app claims it can teach you a new language in record time. I’m not sure about that but the speech-to-text translation and the overall experience were smooth. 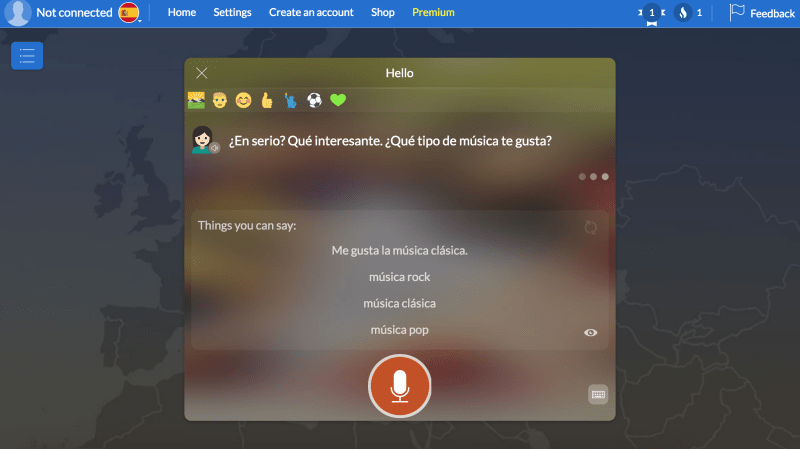 Above: Screenshot of Mondly

Everyone learns differently but the drag-and-drop and visuals make it a lot more fun and easy than just reading flashcards. And again, acknowledging that people

The biggest challenge for me to learn a language is not memorization of words or grammar but rather a lack of confidence that the words coming out of my mouth are comprehendible and accurate. Making these mistakes with a bot before a human can boost confidence and increase the likelihood that a person learns the language in the end.

Mondly is available on the web, iOS, Android, and the Windows Store.

Every bot must pass a certain smell test: Are you a bot for convenience, to give users all options, or do you take advantage of the new medium? Is the service better with a bot than web browser or app? The answer is no both times when it comes to Magic Eight bot. It’s a bot to replace the Magic Eight ball toy popular in the 1990s. I’m extremely confident that if the magic eight ball as we know it today began as a bot, it wouldn’t exist. 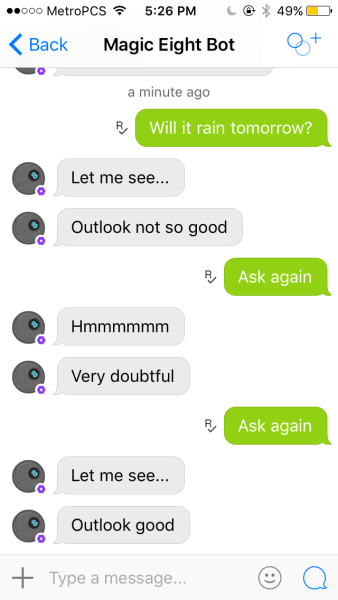 It got popular because that black orb in your hand with the answer provided by that neon blue triangle are just a much more intriguing experience than plain text with no images. Also the Magic Eight app from Mattel, the original maker of the toy, even requires you to shake your phone to get an answer.

This is the kind of bot I hope dies out as the bot ecosystem grows more mature.

This bot uses neural networks to mimic artwork in similar ways as the popular Prisma app and bot.

Like other image editor bots, it can take a few seconds or more to process an image. 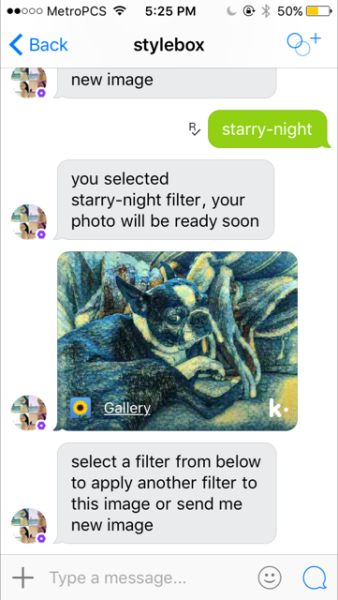 Stylebox has some cool filters inspired by Vincent van Gogh’s Starry Night and Edvard Munch’s The Scream but there are only four to choose from, well below the 30+ Prisma has. This bot is fun but you have better options if you want to use a bot powered by neural networks.

One nice bonus: This bot does not come with the watermark at the bottom of each image that’s present in the Prisma and Vinci bots and others in this space.