VentureBeat sat down with Phil Libin, managing director at venture capital firm General Catalyst, to get his take on the state of the bot ecosystem. It was just a year ago that the former Evernote CEO joined General Catalyst as a partner. Since then, chatbots and conversational interfaces have roared into the technology mainstream, with hundreds of companies attracting more than $4 billion in funding to make thousands and thousands of bots and conversational UIs for platforms like Messenger, Slack, Alexa, and Allo, to name just a few.

In April, Libin made his first investment in Begin, a stealth bot startup. And a few months later, Libin announced investments in Growbot and Butter.ai, also both bot companies. As Libin embarks on his second year as a leading figure in the bot community, he shares with us his thoughts about fart apps and fart bots, investing and IPOs, and how to make the world more like Star Trek.

VentureBeat: Much has been written about bots being in a hype phase where reality can’t match people’s expectations. If that’s true, will we soon be entering a trough of disillusionment and seeing a lot of negative press?

Phil Libin: Everything with bots is compressed in time. I think we’ve already been through two hype cycles, and there will probably be a few more.

VB: When was the first?

Libin: The first one was Slack announcing that they would allow bots on their platform. The second, and probably the biggest one, was the Messenger announcement. All these Messenger bots came, and many of them were kind of stupid. And so we’ve already had troughs of disillusionment, and now we’re halfway up the slope of the next hype phase.

VB: Let’s talk about the first wave of bots, some of which have been called “crapbots.” Why were they so disparaged?

Libin: It’s very similar to what happened with apps. I remember when apps were exactly in this period. I was right when we were starting Evernote, so 2007, 2008. There were two types of apps. There were fart apps, which were trivial. They were toys; they weren’t meant to be taken seriously. There was nothing wrong with them. They were built by developers figuring out what could be done, figuring out how to submit something, how to deploy, figuring out what could be accomplished, having fun with them. So it was the fart app and flashlight stage that apps went through. And right now there’s a lot of fart bots, none of which are meant to be substantive. They’re there because developers want to see what it’s like to write one and ask — what does it feel like? What are the analytics that I can get? How many people will discover it? You’re not supposed to take them seriously.

And then the other big thing that happened with apps is that there were a lot of apps that were just a replacement of desktop applications. They were shrunken-down smaller versions of desktop applications. Those didn’t make any sense, either. And you’re starting to see this now with bots. There are a lot of bots that are just app replacements. They’re taking use cases that already work pretty well with apps and they’re just making bot versions of them for no good reason. Everyone wants to make a bot because they’re kind of hot. Original, good ideas are not that easy to come up with, so the obvious things to do are, well, you know, everyone likes to order pizza, and that works well with apps, so let’s make a pizza bot! Let’s make a weather bot! So what you’re seeing now are a lot of fart bots and app replacement bots, and I don’t see why they would be interesting. That’s what the first stage of [a new technology] is always like.

VB: And we’re not seeing that much actual value has been created in this first wave of bots. There’s nothing that would satisfy Michael Porter’s idea of competitive advantage. What will the second wave look like? Will value be created?

Libin: I’ve got three criteria for my investments in bots. The first one is that it should solve a real problem, not a manufactured one. The second one is that it shouldn’t just be an app replacement. If you can do this use case in an app, then you should just do it in an app. There’s really no reason to do it as a bot. And those first two things — solve a real problem and not be an app replacement — eliminate 98 percent, maybe 99 percent of bots. And of the ones that are left, there’s a very specific thing that I’m looking for. The real power of bots isn’t when you have one person talking to a bot. That one-on-one interaction, one person talking to one bot, that’s really just an app replacement. That’s the metaphor we’ve always had for technology. It’s just a slightly different look for an app. 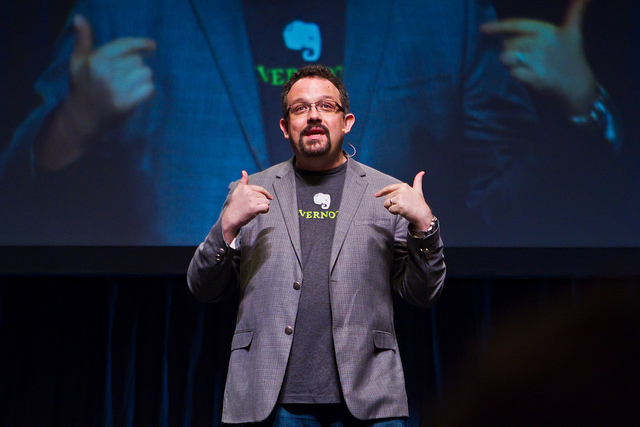 VB: Have your investments satisfied these three requirements so far? How many companies have you backed?

Libin: I’ve made five investments but have only talked about three so far, and they all satisfy that criteria. Only one, Growbot, is publicly available, so far. It’s what people can and should download and use to get an idea of what this is all about. It’s super easy, super straightforward. I very much like simple things, and not just for bots but [also for] companies with ideas that are immediately dismissed by people as being “just X.” If you can dismiss an idea by saying “Oh, it’s just X,” then that’s really good. It proves that it’s simple enough that you’ve really understood it. Many of the great companies in the world started out as “Oh, isn’t this just X?” Google was just Alta Vista with fewer ads [laughs]. Uber was just a way to get a black car [laughs again]. Evernote was just a way to take notes. The “just” stuff doesn’t turn me off at all.

VB: So far we’ve talked about hype and investing. But the fact remains that little value has been created in terms of exits. When will we start to see that change?

Libin: I think pretty soon. My observation with bots is that everything seems to be accelerated. So, we’ve already had the first, somewhat prominent shutting down of a bot company, [Awesome.ai], which was one of the Slack fund startups. I think we’ll start seeing the first exits in the next couple months, but everything that we’re building could be a great independent company. So I’m not looking for things that will sell.

VB: What sector of bots would have the first exits? Ones in the enterprise space?

Libin: Initially, it’s a lot easier to see enterprise use cases [for] three of my investments: Butter, Growbot, and Begin are in the enterprise space. But I do think you’ll see some very interesting consumer cases. I am actively looking for the most impressive consumer use cases, and I expect to make some investments there. The enterprise ones are just easier to see what they would look like, they’re not necessarily easier to build. There’s so much crap in the enterprise space that can be replaced with conversational UX. it’s not hard to see where those would be. On the consumer side, it’s a little bit trickier.

VB: Who will be the acquirers of enterprise bots? Do you think it will be companies like Salesforce, IBM, SAP, and other ERP companies?

Libin: Yes. The standard companies that buy tech will be the ones buying. But I also think you’ll see bot IPOs — probably not in the next 12 months, but my guess is in the next 2-3 years. There will be enough of these with enough traction that they can be independent companies.

When I decided to really focus on bots as an investor, I thought it would only be possible to focus on this for a couple of years, because two years from now, conversational UX will have spread out and be part of the fabric of everything. It won’t really make sense to say that I’m investing in bots, just like it really doesn’t make sense right now to say “Oh, I’m investing in mobile.” No one says that anymore, because mobile is everything. Or take SaaS. People will still occasionally say “Oh, I’m focusing on SaaS,” but I always giggle when I hear that because it’s not a thing anymore. Nearly everything is SaaS at some level. So we’ll see the same thing with bots. I don’t know if in three years, when we see the first IPO, if people will say “Oh, this is the first bot IPO,” but there will clearly be new companies created right about now that fundamentally use this technology and that will become great enough businesses to go public.

VB: After 20 years as an entrepreneur, and leading Evernote to unicorn status, what’s the transition to investor like?

Libin: When I was deciding what to do next, I wanted to do something where I could have a big impact, where I could have a few different bets, and it seemed like a natural fit to incubate companies, to invest in companies. And I wound up picking a VC firm the same way I picked VC investors as an entrepreneur. It’s 99 percent chemistry. As long as I got a top firm, and GC is a top firm, then it was all about falling in love with the people. It’s been great.

VB: What’s it like to go from focusing on one company to focusing on several companies at once?

Libin: Honestly, [laughing] I think I’m much more impressive for 45 minutes at a time. I’m better in relatively short periods of time. I think I can have a big impact in bite-sized chunks by helping out when I can, being hands-on when I need to be, and spreading that out over a few companies.

VB: Is there one area where you think you can be most impactful?

Libin: I love mission-driven companies. My whole hypothesis, my goal in investing — and really for the rest of my life, I hope — is to make things that get the world closer to Star Trek. There are two directions that the world can go in, there are only two possible futures: The world can become more like Star Trek or more like Mad Max. There are already people pushing the Mad Max option, and I see my job as pushing for the Star Trek option.

So anything that exists in Star Trek, I’m interested in. The things that don’t exist in Star Trek, I’m bored by. So there are all sorts of companies that are trying to make the world better in interesting ways, and I want to help. And I think I’m pretty good at helping entrepreneurs think through the design of a solution that would make an impact. And I don’t really want to do that for things that are trivial or for things that are just about making money. I very much want to do it for companies that are pushing the world in a better direction.

VB: Thank you very much.

(This interview took place on August 26, 2016 in San Francisco. It has been edited and condensed for clarity.)