Google has announced plans to acquire Apigee, a company that offers software for predictive analytics and management of application programming interfaces (APIs).

Google will pay $17.40 per share in cash to acquire the company, for a total value of around $625 million.

“APIs — the mechanism developers use to interface and integrate with outside apps and services — are vital for how business gets done today in the fast-growing digital and mobile marketplace,” said Google SVP Diane Greene, in a blog post. “The addition of Apigee’s API solutions to Google cloud will accelerate our customers’ move to supporting their businesses with high quality digital interactions. Apigee will make it much easier for the requisite APIs to be implemented and published with excellence.”

Founded in 2004, San Jose-based Apigee went public in April 2015, popping 17 percent on its NASDAQ debut after raising $87 million in the IPO. Its shares were more or less in free-fall until February this year, when it hit a $5 low, but it has steadily risen again, and, as of yesterday, was roughly at its IPO level. 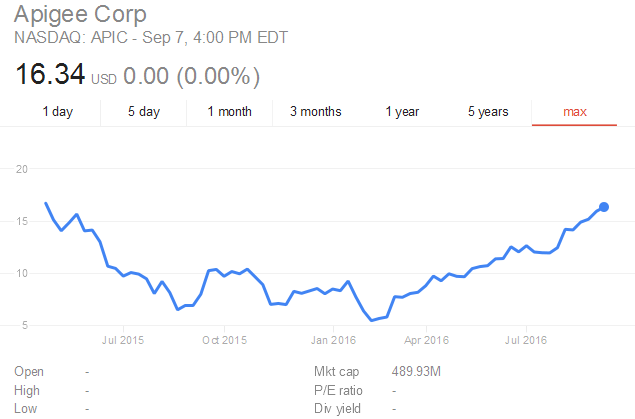 Above: Apigee Shares: Peaks and troughs

Apigee counts a number of big-name clients, including Walgreens, which uses Apigee to manage the myriad APIs it offers to third-party developers. These include its Photo Prints API, which allows other companies to enable photo-printing features in their own apps.

In short, APIs allow developers and companies to open up additional revenue opportunities beyond their own closed silos. But APIs need to be secure and support multiple development environments, while at the same time being maintained and tested and offering analytics and data around their usage and uptake. This is where companies such as Apigee come into play.

Indeed, Forrester reckons the API management market will be a $660 million annual industry by 2020.

With the cloud computing industry heating up, Google is looking for differentiators and value-added services to offer its cloud-computing customers. Now, with Apigee’s API smarts integrated into its enterprise offering, Google has added a valuable string to its bow.

There’s nothing to suggest that anything will be changing at Apigee — existing and new clients will still have access to the service.

“We’ve entered a new era of cloud computing, where enterprises are increasingly running business-critical applications in the cloud — and across multiple clouds,” said Apigee CEO Chet Kapoor, in a statement.

“Google is the open cloud provider committed to delivering new software for not only hybrid-cloud environments, but also for the multi-cloud world,” he continued. “With their history of innovation in web and mobile technologies, we believe Google is the partner for companies embarking on digital transformation. We look forward to being able to accelerate our mission to connect the world through APIs as part of the Google team.”