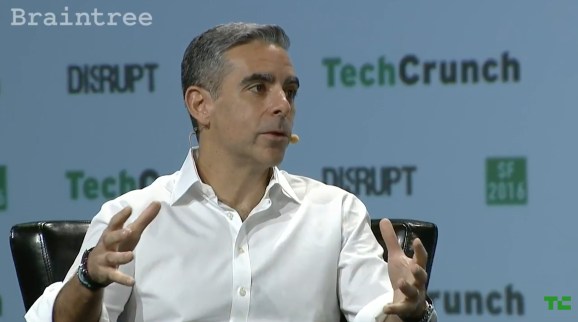 Since Niki.ai started accepting payments via Messenger a little over two weeks ago, Marcus said, the Indian startup has seen a 10x increase increase in conversions compared to mobile websites.

Also new today: Bot ads will soon be placed in the News Feeds of Facebook users, Marcus said, extending the discoverability of bots on Messenger.

More than 34,000 developers have created 30,000 bots since CEO Mark Zuckerberg opened the Messenger API in April.

While onstage at Disrupt, Marcus also addressed questions of initial bot hype and how Facebook is working to make an ecosystem.

When asked about what was wrong or missing when the bot platform was launched in April, Marcus said it takes time to build an ecosystem and that Facebook’s first focus was to “put the stake in the ground and enable all the enablers, all the companies out there to come in and start building capabilities and use the API.”

“I think the problem was that it got really overhyped very very quickly, and the basic capabilities that we provided at that time weren’t good enough to replace traditional app interfaces and experiences, and so what we’ve done in the past couple of months is we’ve invested and built more capabilities,” Marcus said.

Several new features have been added to the Messenger platform since April to accommodate bots, including menus, cards, buttons, and carousels, as well as the ability to send marketing and subscription messages.