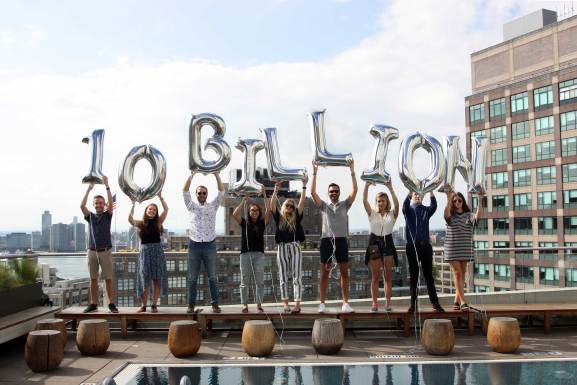 On September 13, 2015, Foursquare announced its users have checked in more than 10 billion times.

After nearly eight years in the location-based service space, Foursquare announced on Wednesday that more than 10 billion check-ins have been made across its apps. This represents a 42.8 percent increase from a year ago, when the company revealed it had 7 billion total check-ins.

These check-ins are from Foursquare and Swarm apps, website, and mobile web and represent more than 50 million monthly active users, a number Foursquare cofounder Dennis Crowley touted at VentureBeat’s GrowthBeat conference in 2015. And while this number doesn’t appear to have grown, it is telling that existing users aren’t abandoning the service.

“The check-in powers everything in the company,” said Jonathan “J” Crowley, Foursquare’s vice president of product. He views all the user activity as impacting recommendations around the world.

“We’re super excited to have passed 10 billion check-ins,” he continued. “People are checking in more today than ever before — and for different reasons. They love the real-world rewards of perks and challenges. They love playing the real world games — like mayorships, sticker upgrades, and winning the friend leaderboard. Checking in has become this awesome habit for millions of people who are creating a digital life log of all the places they’ve discovered. It’s like a memory bank of all their adventures.”

To put the growth of Foursquare into perspective, there are nearly 9 million check-ins a day, a feat that Crowley suggests is another indication of the explosive growth of engagement in both Foursquare and Swarm. What’s more, Foursquare has logged more than 100 million places worldwide, with more than 600 million photos and 87 million tips.

Since its debut at South by Southwest in 2009, Foursquare has been on the front lines of keeping location-based services alive, even as competitors such as Gowalla have faded away. But things haven’t been easy for the company, which faces pressure from Yelp, Facebook, and others who have incorporated the check-in into their products, instead of making it a standalone business. But Foursquare is still is pushing forward, leveraging the power of its database for advertising and even making some pretty accurate predictions for businesses, such as sales figures for the iPhone.

“Foursquare’s data is essentially the world’s biggest panel of foot traffic data — we have the best sense of the trends and patterns of the movement of people and their phones around the world,” wrote company chief executive Jeff Glueck in September.

To mark this milestone, Foursquare is giving all users that check in 100 bonus coins that they can use to purchase perks.