Customer service software company Zendesk today announced that companies using its platform can now reach more customers on what it calls “nontraditional platforms.” The new function automatically generates Zendesk customer service tickets when a company receives a message or is mentioned in a review or comment online.

Zendesk believes collecting tickets from multiple channels into a single place creates an opportunity to turn reviews into a conversation. 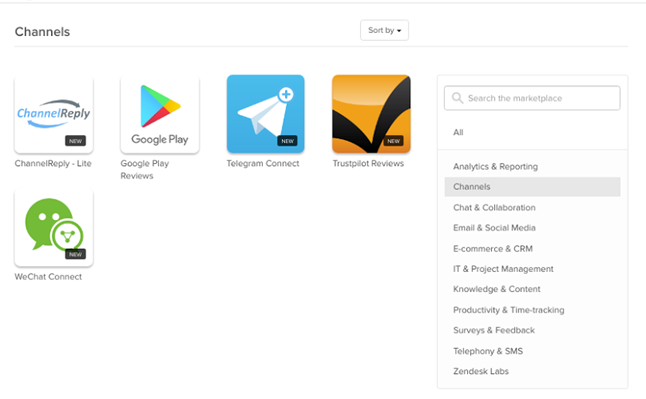 Above: Screenshot of the channels section of the Zendesk Apps Marketplace

The latest integrations in this effort come from messaging platform WeChat and online review website Trustpilot. There are more than 360 companies in the Zendesk Apps Marketplace, according to the senior vice president of product development at Zendesk, Adrian McDermott.

“We no longer have to be the means of production for every integration that we want in Zendesk,” McDermott said. “By building this as a channel we’re going to learn from that as much as we did from our APIs or our apps.”

The new integration gives companies the ability to gather all online conversations or comments about their company, open a dialogue with customers, and learn from the wisdom of the crowd.

“What we see is our customers and our market building ticket channels and adding channels in Zendesk to create tickets for almost anything,” said McDermott.

The company worked with partners ahead of the launch of this effort, such as a Zendesk customer in Kenya who built the WeChat integration, and Danish review site Trustpilot, which created the Trustpilot integration.

“Anywhere you’re trying to engage in a two-way dialogue with your customers, you can put [that] into Zendesk,” McDermott said. “We don’t have to be the creators and validators for every integration. More than 40 percent of our business is outside the U.S., and there are these incredible use cases out there in pockets and in languages we do not read or understand.”