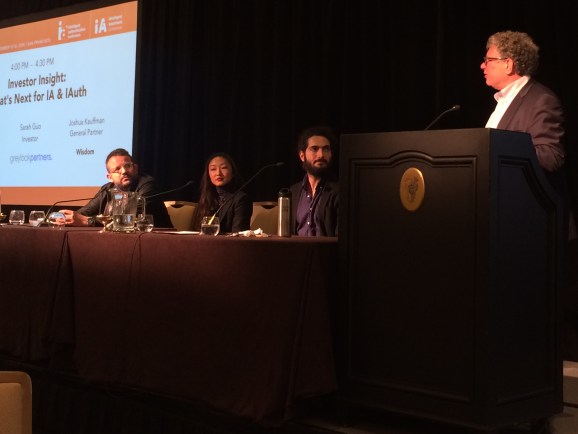 Left to right: Phil Libin of General Catalyst, Sarah Guo of Greylock Partners, and Joshua Kauffman of early-stage investment firm Wisdom at the Intelligent Assistants Conference at the Palace Hotel in San Francisco

Right now, Facebook, Microsoft, and more than 170 companies across the bot landscape are trying to put software inside chat platforms. As bots become part of the biggest platforms on the planet, there’s wide speculation about how they will change tech and business.

That’s why three enthusiastic early-stage venture capitalists were invited to the Intelligent Assistants Conference in San Francisco this week to talk about what’s next for bots and intelligent assistants.

Sarah Guo works at Greylock Partners, which has funded Operator, a bot that connects people to human and A.I. shopping experts, and Rise, a nutritionist available on SMS. She is author of “Clippy’s Revenge,” a popular story about the impact of bots.

Phil Libin is managing director of General Catalyst and has invested in five bot startups in the last year, including Begin, Growbot, and Butter. He plans to start multiple bot businesses in the years to come.

Joshua Kauffman is general partner at early-stage investment firm Wisdom. He believes that bots will help people become wiser and that they can act not just as personal assistants, but as gurus.

Each has spent time listening to pitches from startups making bots and artificial intelligence, and each has strong opinions about the fledgling industry. Here’s how they predict bots will reshape all of our lives in the future.

The rise of utility-oriented bots

Complex A.I.-driven bots get a lot of attention today, but simple, less flashy bots that help businesses complete tasks and communicate with customers may be very powerful, too.

“I think we’re going to see a lot of things that are much more utility-oriented. I actually think that there’s a lot of opportunity for traditional businesses or businesses that haven’t really invested in, for example, successful mobile native apps to take take advantage of these platforms, because they’re a new distribution channel and the theoretical benefit is that you both get this massive install base,” Guo said, referring to platforms like Line, Messenger, and WeChat, which have hundreds of millions of users.

She believes chat platforms will do big things because they’re mobile, they have push notifications, and they don’t require installation of apps.

“That’s really attractive for a whole bunch of use cases that may or may not be relevant to us. I personally think there are opportunities enabling what might be just utility conversations or broadcast conversations, to help traditional businesses do that, but I think there’s a spectrum of different use cases here. It’s not just the ones that look like some full human A.I. conversation that are interesting.”

Kaufmann’s firm invests in startups that help people live with greater wisdom. That’s why he is very interested in intelligent assistants and chatbots.

“Any time a human needs a relationship and a person isn’t there, [it’s] an opportunity for a chatbot to fill itself in. I think that when humans are on this planet in some years’ time, with a lot more technology, we’re going to find that our ultimate purpose is to be having conversations with each other, in addition to creativity and other things. So there’s a lot of conversation that can happen with chatbots and intelligent assistants.”

Bots will be part of the listening audience

Bots will shape the way people act on chat platforms, Kauffman said, because people will come to think of them as part of the listening audience.

“We think that the greatest human fear is invisibility. We think that it’s the motivator for why people view social technologies the way that they do, and we think that, ultimately, it’s having witnesses and having an audience that is our underlying motivation,” he said.

That’s a good motivator, because an audience has the capacity to shape who you are and steer you in the right direction, Kauffman said.

While discussing the discoverability of bots, Libin made the argument that there will be far more bots than there are apps, and that the discovery of bots may begin to mimic how we discover popular people.

“If you think about it, how do you discover people? Well, people get famous. How do people get famous? Well, bots are going to get famous in the same way. There will be famous bots that got to be famous by doing something notable or being in the right place at the right time or being around the right kinds of people or other bots,” he said. “All of the things that make people famous now will make bots famous. Discovery will move into more of that direction.”

Some people argue the App Store discovery model leaves most apps buried, Libin said, but that’s actually a good thing, “because the average app is a piece of crap that doesn’t deserve to be discovered. If you make something really good, just look in the App Store. People are going to discover it and talk about it.”

There will be a long tail of crappy bots

The prediction that bots will become famous was quickly followed by another from Libin. He said that even though there are a lot of reasons to be bullish on bots, most bots are crap, just like most apps.

If you think two million bots are hard to follow, it’s about to get even worse.

“Within two to three years there will be 100 million bots and oversaturation, because the bar for making the average bot is so much lower than making an app. It takes a few hours to make a shitty app. You make a crappy bot in a couple of minutes. There will be more bots than people in some places, so… there’s going to be this enormous long tail of useless crap,” Libin said.

In some situations, people will prefer to speak to bots

When it comes to customer service, some companies are trying to make bots that seem like people, because they believe most customers prefer to talk to people.

Guo disagrees. “I don’t actually think that’s true, or I think people will acclimate,” she said.

People call 1-800 numbers today because they know it’s often the fastest way to solve a problem. But Guo believes that will change when bots become able to handle more complicated queries. And there are already situations in which people are happy to speak with a bot instead of a human.

In China, millions of people have studied English but lack the confidence to speak with others.

But if you can speak with a bot with “infinite patience and accessibility and the voice of somebody who is a native English speaker,” Guo said, “that causes a lower social burden and less insecurity.”

Libin thinks that people may even come to prefer the bot to a human in this use case, because bots can be really good at teaching languages.

Although it was not widely known before this discussion took place, Libin recently invested in a company that makes a language learning bot.

He argues that bots shouldn’t be thought of as assistants or human-like in any way. In his view, bots are a lot like service animals. They may not be great conversationalists, but they will be able to do one thing really well.

Bots may be able to specialize in certain simple tasks, but not everyone agrees that teaching is one of them. Kaufmann, for one, rejects the idea that A.I.-driven bots will surpass language teachers, at least anytime soon.

“I have great doubt that we will be able to create bots anytime soon, within the next five to 10 years, that are able to impose this tacit knowledge. The teacher-student relationship is one that is really hard to understand, and a lot of the perceptions and observations happening cannot be put into code,” he said.

The beginning of a massive transformation

Throughout the hour-long discussion at the end of the conference Tuesday, the investors were only asked one question about investment: Are major players locked in, or is this just the beginning of the investment opportunity landscape?

“I think it’s just the beginning. I think that technology moves in these seven- to eight-year S-curves, and, during this period, a bunch of fundamental stuff is invented and the companies that start that power the next seven to eight years of hypergrowth,” Libin said. He added that this growth “then levels off” and concluded that “we’re in the slow period right now.”

The fundamental technology of this slow period is A.I., he said.

“We have bots and conversational UI, and the next trillion dollars or so of startup market cap is going to be created by companies that are made during this slow period. I’d say we’re in the first one-third of the beginning in terms of the investment,” he said.

Bots offer another way to distribute services on mobile devices. Chat platforms remember who you are, send ping notifications, require no app downloads, and have become more popular than social media. It’s already happened in China. Soon people in other parts of the world will begin to ask questions, then explore the use of chat platforms and mobile devices in the physical world.

Guo elaborated on the growing consumer expectations that are driving the bot craze.

“Why can’t I purchase things through a messaging application by scanning QR codes everywhere? Why can’t I recognize all the people that are around me? Why can’t I do automatic translation all the time? Why doesn’t my messaging platform and the apps within it have all of that context? I think we’re going to go through this massive transformation where we understand how to use mobile phones in the real world instead of just staring at them and playing games all the time,” Guo said.

Match these capabilities with opportunities in automation and the ability to facilitate conversations between businesses and consumers, and you know something big is coming, Guo said.

“If you think about where we are versus what the science says we are able to do in these fields, we are at the very beginning, so we’re pretty excited about it. Another way to think about it is there is not a bot that your average consumer is really excited about right now. We certainly haven’t hit that first inflection — but I think it’s coming,” Guo concluded.