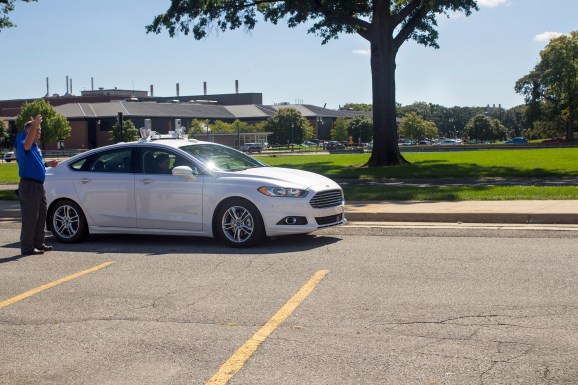 I don’t own a car. Living in New York, I don’t even have a license. But on Monday Ford’s autonomous car took me for a ten-minute ride on the calm streets of Dearborn, Michigan, where the 113-year-old motor company has spent more than a century making cars that don’t drive themselves.

Henry Ford likely never imagined cars would someday drive themselves — although Ford envisioned a “time when almost every family will have a small plane in their backyard.”

That changed 12 years ago, when Ford started developing autonomous technologies with U.S. research agency DARPA. And this week, Ford demonstrated its self-driving cars for the first time to journalists and auto enthusiasts, at its headquarters 20 minutes from downtown Detroit.

The carefully orchestrated rides were the star of “Further with Ford,” the auto company’s annual conference series which I mostly missed, having flown in at six in the morning and out at seven that night, misplacing my credit card and nearly losing my laptop along the way. It was worth it anyway, angering the TSA agent in charge of lost and found. I’d just been inside a self-driving car.

Half a dozen or more tech and auto companies are developing autonomous cars today. Most of these projects, from the outside, feel very real. Ford thinks it can mass-produce autonomous cars without steering wheels by 2021, initially for services like Uber. Self-driving cars may change the way humans move around forever, and they could solve mobility problems for the elderly, disabled, kids, and even New Yorkers who can’t drive.

The experience stayed with me and solidified through the week. When friends and family asked, “How was it?” and “What was it like?” I couldn’t quite answer. I didn’t know how to answer. It didn’t feel like much at all. A few words come to mind, one of them: boring.

But no, this is a self-driving car. It’s the future. The future isn’t boring, is it?

It felt safe, and ordinary, and that’s not how I expected self-driving cars to feel.

In order for thousands of pounds of programmed steel and glass to chauffeur millions of humans this way and that, they can’t thrill passengers. They must feel safe, and predictable, and thus: relatively unexciting.

This is Ford’s wheelhouse. Ford oozes normal. You may find hordes of GM faithfuls chanting “found on road dead” and “fix or repair daily,” but if this car company, a pillar of American industry and capitalism, was a flavor, it would be something plain that everyone is OK with — vanilla.

Ford’s current prototype, a modified, white 2012 Ford Fusion, is so naturally “some car on the road” that there’s hardly any sense of risk to it. Even with sensors bolted on top, Ford’s car isn’t reminiscent of a go-cart like Google’s self-driving car, or sleek and futuristic like Tesla’s semi-autonomous sedan. Maybe that’s why Uber went with the Fusion, too, for its competing autonomous vehicle.

Above: How Ford’s self-driving car sees the world, according to Ford AV director Randal Visintainer: “We take the active scanners, the blues and the reds — that’s the real-time LiDAR — and we overlay that with the prior map and we know where we are in space.” For unidentified objects, “we use deep neural network machine learning to identity what is it.”

I didn’t test-drive Ford’s prototype alone. Inside, two “safety riders” (engineers) took up both front seats, while a second passenger and I sat in the back. As the car accelerated and the steering wheel gently swung left to right, the engineer in the driver’s seat kept his hands palm-up in his lap, ready to grip the wheel in case the computer decided to plow us into a pedestrian. Had I sat by myself in Ford’s prototype, without engineers to look out for critical errors, it might have felt more jarring.

Autonomous cars like Ford’s depend on carefully mapped and geo-fenced routes, radar sensors, camera systems, and machine learning in order to get around from one place to another. It’s a step up from the isolated, private tracks autonomous cars were once restricted to, but a far cry from the boundless self-driven cars of the future.

The path Ford created for its demonstrations weaves through the parking lot of an engineering building and onto a main road with a 25 miles-per-hour speed limit. “The route represents a very, very small subsection of our actual development route,” a Ford engineer told me during the ride.

The car was tested with obstacles along various points of the trip — crosswalks, stop signs, stop lights, and so on — mundane interruptions unlike the dense, chaotic city environments autonomous cars are expected to initially target in five years. At one point, a squirrel crossed our path, paused near the middle of the road, and scurried out of the way. “Right now, if there is a squirrel and if the squirrel is in the middle of the road, it’s better for the safety driver to take over,” the other Ford engineer told me.

As the car gently accelerated, it nudged its steering wheel to remain dead in the center of the lane like an anxious new driver. At each four-way stop, the prototype paused for multiple seconds before attempting to cross the intersection, hesitating as cars approached.

“The car is super conservative,” the Ford engineer said. “If it sees a pedestrian, even though he might not be in the center lane, it’s going to stop for it … we are very cautious.”

Ford’s prototype made its most confident, quick turns pulling back into the parking lot where the trip began. Other attendees stood in a nearby tent, waiting to ride.

By the end of the year, Ford anticipates one of its principal sensors, LiDAR (a technology funded by Ford), will double its range, enabling the car to see up to 200 meters around it, the distance it needs to “stop the vehicle at highway speeds for a stationary object,” says Ford autonomous vehicles director Randal Visintainer.

Ford aims to build new prototypes with new sensors in time for 2017 tests in Arizona, a state with friendlier laws for self-driving cars than Michigan has. Next, Ford will take its “developmental sensors and turn them into designs that can be mass-produced,” says Visintainer. Ford isn’t disclosing what its final, mass-produced autonomous cars will actually look like, but Visintainer described it as “being set up around the rider,” instead of the driver.

Someday Ford plans to sell these autonomous cars to anyone. Ford CEO Mark Fields said on Monday that, following the 2021 pilot designed for ride-hailing services, a public launch would arrive “probably a few years later, mid-decade.”

Inside today’s prototype, the technological leap made by Ford and its competitors feels like a small, comfortable hop. Like skipping over a sidewalk puddle.