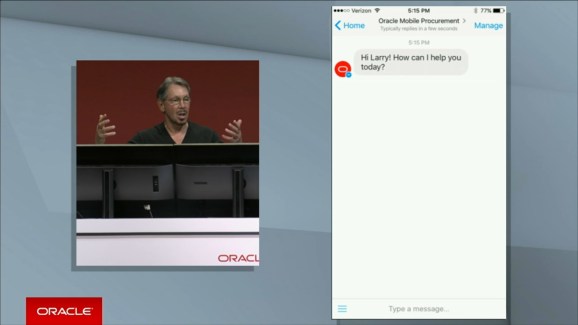 Not surprisingly, Oracle is positioning its chatbot platform as a simple interface for enterprise applications. But the chatbots made with it can work in modern messaging apps like Facebook Messenger, Slack, and Kik.

The tool doesn’t require you to write in Java, PHP, or even JavaScript, Ellison said. Instead, it involves dragging and dropping in a graphical user interface.

So far this year, Facebook and Microsoft, among others, have already launched services for building chatbots.

On stage today, Ellison demonstrated a Messenger chatbot running on an iPhone that was built with the Oracle software. One could imagine interacting with it through voice commands, rather than text messages, Ellison said. That wasn’t shown today, though.

Instead, he exchanged text-based messages with the bot, which went by the name Oracle Mobile Procurement, to place an order for a new set of business cards.

When the chatbot showed him his current card, it had his previous title: chief executive officer.

“Hmm… Checked with the HCM system,” the bot said. “It looks like your title has changed since your last order. Would you like your updated title on your new cards?”

Ellison did not talk about when the new service would be available or how much it will cost.

Update on September 20: The chatbot builder is part of the existing Oracle Mobile Cloud Service, Oracle said today in a statement.