The quadcopter drone goes on sale later this year, with interchangeable rotors that you can fold so that it fits in a backpack. The company hopes that it will boost GoPro’s stock price, which isn’t what it used to be. The new product takes the company from one sector — action cameras — to the fast-growing drone market.

There’s plenty of other competition in the drone market, but GoPro is hoping that the fans of its Hero action camera will take to its product. GoPro also introduced a new Hero5 action camera, with a much smaller size than its previous Hero4. The Hero5 Black has a two-inch touchscreen display, GPS, three microphones, and it is waterproof (up to 30 feet). It costs $400.

The Hero5 Session costs $300. The Hero 5 Session shoots 10-megapixel photos and it has no screen, no GPS, and no RAW or WDR modes.

The Karma drone has a removable stabilizer that can be mounted on a bike, helmet, or a car. And it has a handle that pops out so it becomes a stabilizer grip for the camera that you can use while it’s not up in the air. 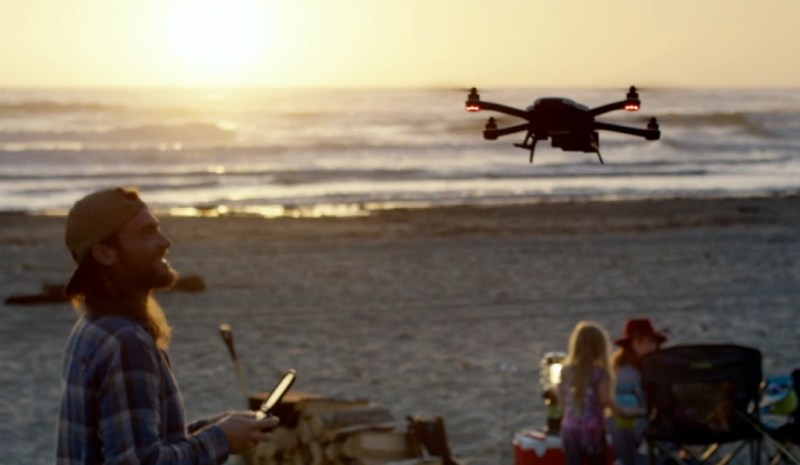 Above: Flying the GoPro Karma drone.

“Karma has become the ultimate GoPro,” said Nick Woodman, CEO of GoPro, at the company’s event today at Squaw Valley. “Karma is so much more than a drone.”

Rivals include DJI, Parrot, and Yuneec. The competition is going to be tough in this sector.

GoPro released the video of Karma below.