Gametime is announcing that it has raised $20 million in funding to make it easier for sports fans to buy last-minute tickets to sporting events.

This funding proves that the “economy of now,” also termed the “moments economy,” is still hot.

The company said that 80 percent of Gametime app transactions take place within seven days of the event. Fifty percent of those occur on the day of the event, and more than 10 percent take place after an event has already started.

Fans can use the Snap & Sell feature that lets them sell their own tickets quickly via mobile uploads. Millennials make up more than 70 percent of the company’s users.

“We believe living in the moment makes all the difference,” said Brad Griffith, CEO and founder of Gametime, in a statement. “Our last-minute marketplace represents the antidote to the cumbersome buy-months-ahead experience. We simply offer a much different experience than buying ahead. Millennials, specifically, love that they can buy in two taps, especially when they’re mobilizing friends just minutes before start time. This funding will help us continue on our steep trajectory, as we pioneer the last ­minute into the next big category in our industry.” 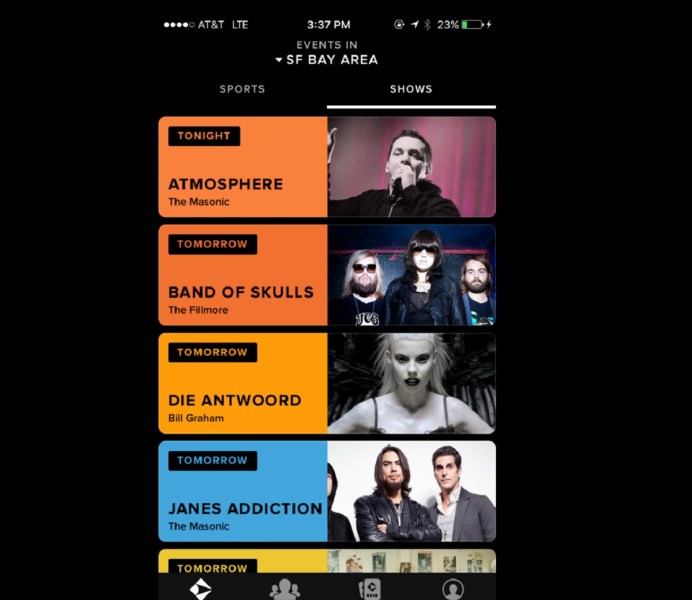 Above: Gametime lets you buy last-minute tickets in seconds.

Although Gametime competes with big companies like Ticketmaster and StubHub, it believes it has an advantage, because it can reach spontaneous fans who turn to their mobile devices for a quick solution when they want to see a live game. The inventory is never more than a second out of date, the company says.

Griffith got the idea for the company a while ago, when he and his brother were trying to buy last-minute tickets for a San Francisco Giants game. They were at a bar and realized they had to print the tickets. They talked to the bartender and got permission to go to the office and print the tickets. But they accidentally printed in color, so the process took extra time, even though all they really needed was a barcode or QR code. After all that, they arrived late to the ballpark. To solve this problem, they decided to create an app, and Griffith founded Gametime in 2012.

When you try to buy a ticket at a participating venue, Gametime will make some calculations and surface the 50 best tickets that people are selling. It takes into account the price of the ticket and the quality of the view from the seat. With this automated process, the fan no longer has to wade through thousands of tickets and can get an image of the view from the seat before purchasing. Gametime takes a small piece of the overall transaction.