On the heels of LinkedIn’s 10-year anniversary, I explored the company’s progress from yet another social network to one that impacted the way we worked. In the years since, LinkedIn has accelerated efforts to advance our professional careers and has shifted from being just a place where we connected to one aimed at facilitating education and growth. This is all part of LinkedIn’s vision, something chief executive Jeff Weiner described at a media event on Thursday as “creating economic opportunity for every member of the global workforce.”

In the past three years, LinkedIn has seen millions join its platform, increasing membership by 67 percent — from 225 million to 450 million. Although it pales in comparison to Facebook, LinkedIn is still a major force within the professional networking space. And even as it caters to different segments by launching new apps left and right, it’s clear that LinkedIn is about to go all-in on messaging.

Conversation is “a pillar” of LinkedIn

“People are using [LinkedIn Messaging] to have great conversations with recruiters and their connections. They’re doing it faster than before, and it’s giving people a great reason to connect with their networks,” Mark Hull, LinkedIn’s senior director of product management, told VentureBeat in an interview. He oversees the company’s messaging, groups, and relationships products and is excited by the potential of messaging. “No one really likes networking, but they’ve built an amazing network on LinkedIn. Messaging has made it possible to leverage your network…you can’t stay on top of all your contacts at the same time.”

LinkedIn says that more than half of its members interact with messages weekly, but that wasn’t originally the case. Until last August, the service’s message tool was rather archaic, falling behind the instant messaging-like feature users enjoyed on Facebook Messenger, Kik, and Skype — it was the equivalent of an email service provider. To get Messaging where it is today, LinkedIn utilized the team and technology from two acquisitions: pre-meeting intelligence startup Refresh.io and meeting collaboration tool Mumbo. 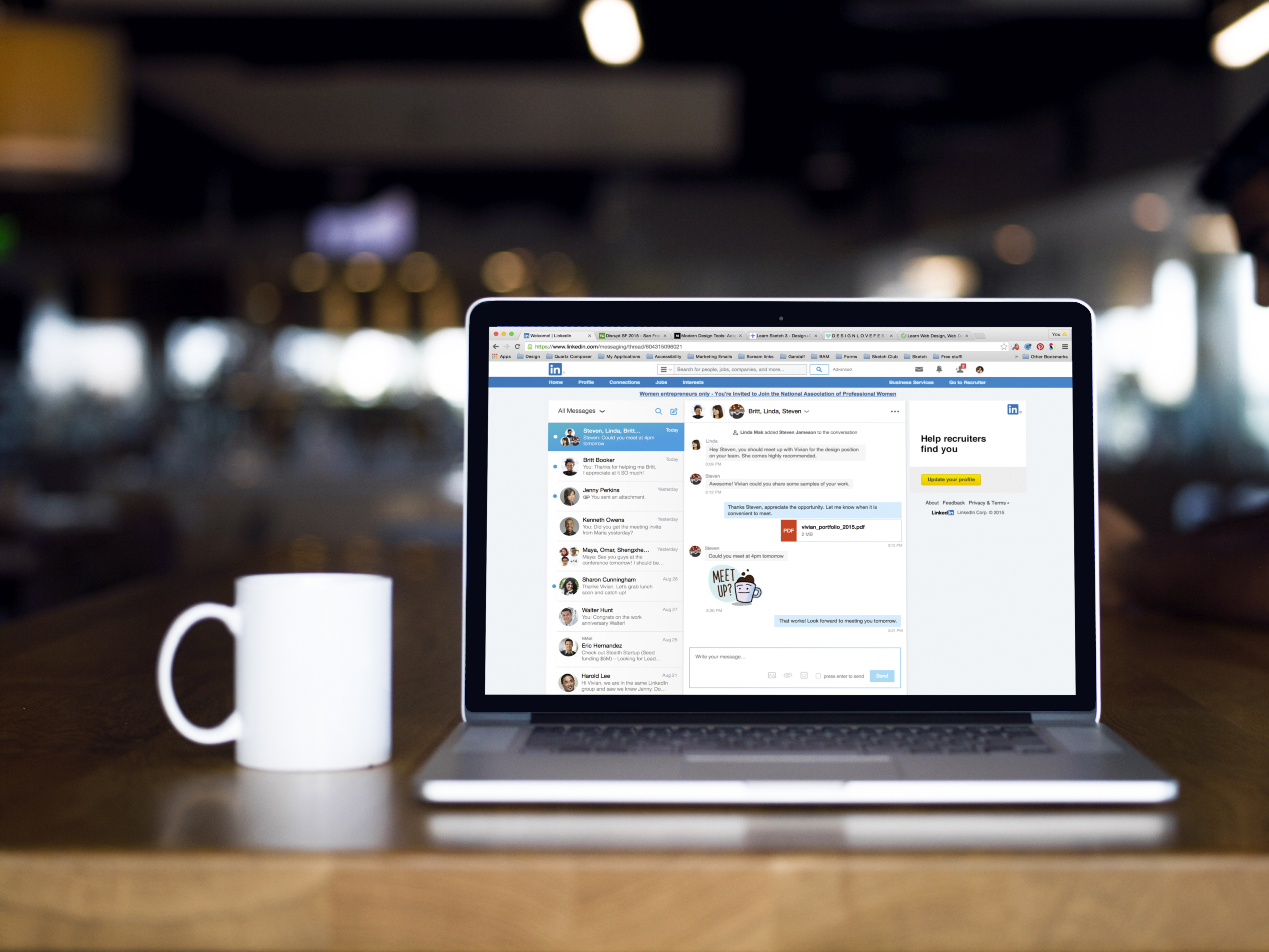 Hull stated that in the early years, LinkedIn may have had the greatest database of connections and information behind it, but it wasn’t focused on conversations. “The contact was no good without conversing with them,” he noted. “The next thing you want to do is converse with your contacts, maybe ask questions, solve tough office work, send stickers, etc. It’s the centerpiece among teams, colleagues, alumni from school, and potential business partners. Conversation is a pillar of what LinkedIn is all about.”

In contrast to Facebook Messenger, Skype, Google Hangouts (or Allo), the type of people using LinkedIn Messaging are all professionals. “If you think about the kind of relationships on LinkedIn, they’re professional in nature. If you hear from someone on LinkedIn, you know it’s going to be professional and meaningful,” Hull said.

LinkedIn’s goal is to continue driving engagement to messaging, something it teased on Thursday. Hull claimed that LinkedIn has become a meaningful member-to-member format because it’s not a medium that’s flooded with marketing messages.

“From a general perspective, the sales and recruiting cases (paid channels) represent a significant minority of communications, while the vast majority are professional in nature,” Hull said. “It’s one of the reasons why we felt so comfortable with having a messaging service.”

The company takes a look at who you’re talking with, what you might be interested in chatting about, and what you’d like to say. When you’re reaching out with LinkedIn Messaging, you’re already reaching out with an objective, such as looking for an opportunity, background information, or advice. Hull believes that with this professional context and understanding of the conversational intent, LinkedIn can provide relevant insights.

The next era of messaging

Hull shared that LinkedIn’s focus is now on helping members “unlock the power of networks through smarter and productive conversations,” highlighting that there are two types of discussions being had. Within the context of networking, members are interested in reconnecting and soliciting advice and leads — “there are thousands of these activities every day.” On the other hand, among premium members who use LinkedIn InMail, there have been 500 million exchanges so far.

“We believe in technology for how it can change people’s lives,” Hull said. To accomplish that goal, messaging is being thrust into the forefront of every change made to LinkedIn’s ecosystem of apps and services. Whether you’re looking at someone’s profile or job listing or reading an article of interest by an influencer or through Pulse, the company is trying to make it easy to message without changing the context. 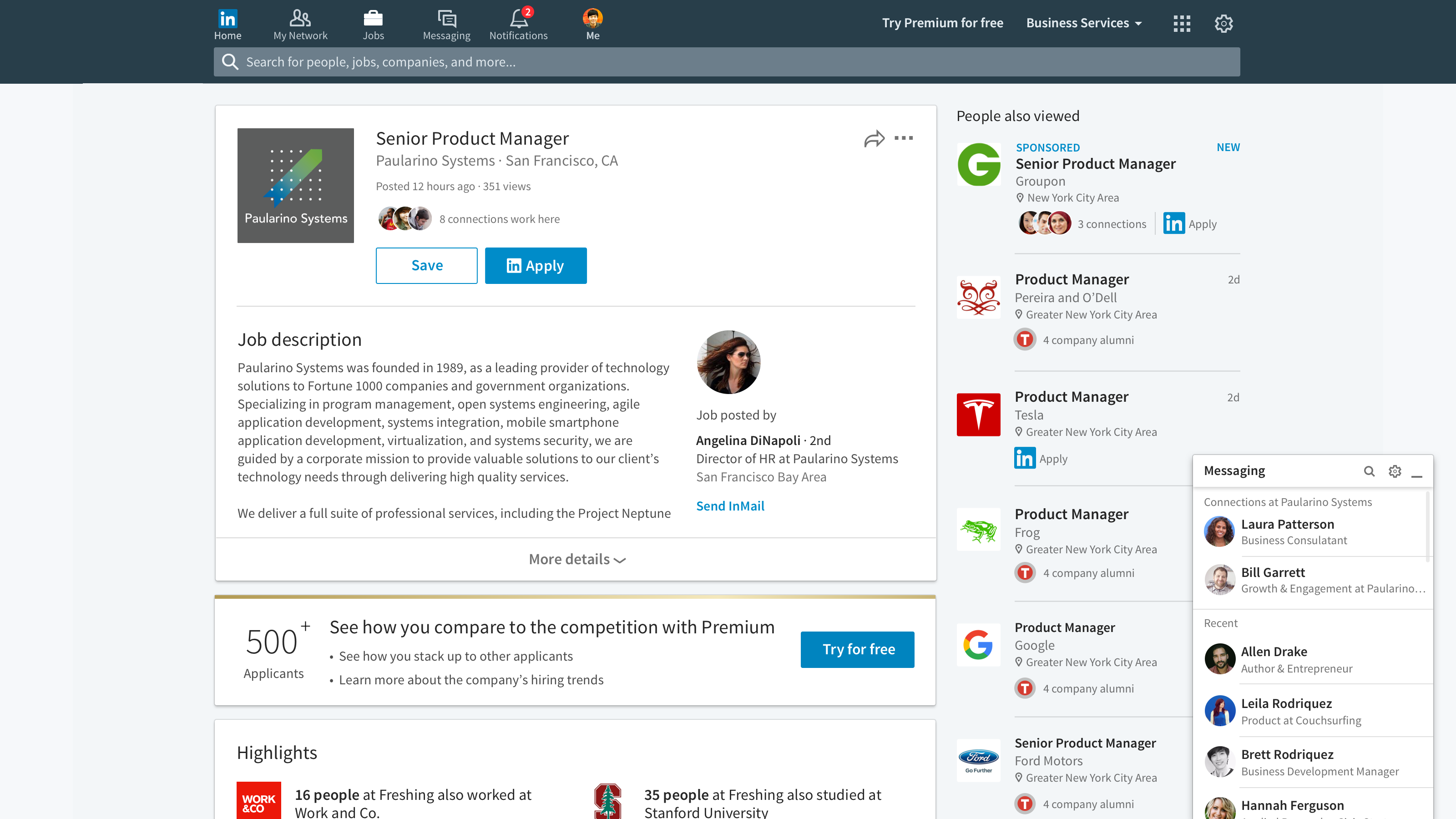 Above: LinkedIn Messaging now understands context of the conversation, shown here with the social network’s 2016 redesign.

“We want to make it easier to have a conversation with anyone that matters, be it the right people in your network, people you’re connected with, people in a company, address book, etc. If you have a strong relationship, you should be able to reach out,” Hull said.

LinkedIn promises more intelligent systems in the near future, features that will make conversations more productive. These include things like scanning your calendar for availability, so when you message someone you want to meet, a prompt will display open time slots. Additionally, it’ll provide more contextual information about people you’re meeting, like where you’ve met before. These features are similar to what you’d get from Rapportive.

Another messaging feature LinkedIn plans on releasing would provide a dossier on people you’re meeting, helping you prepare for your encounter by showing all the pertinent information about their professional careers. And with the launch of iOS 10, you’ll be able to use Siri to send voice-based messages to contacts.

Bots are coming to LinkedIn 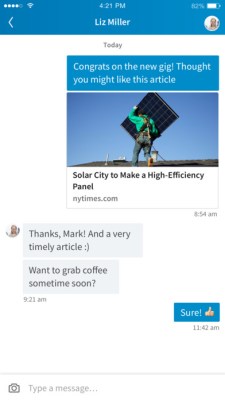 Above: LinkedIn Messaging on mobile

To take messaging to the next level, LinkedIn has built a bot that Hull described as an “assistant.” And while this mini-application is a first for LinkedIn, don’t expect the floodgates to open to third-party developers. With a professional focus, the company isn’t interested in letting bots that you’d find on Facebook enter its territory. In fact, LinkedIn wants to be more guarded to ensure the right experience — perhaps taking a page from Facebook’s David Marcus, who called bots “overhyped and underpowered.”

Weiner said that LinkedIn will do more with bots in the future, but for right now “the team is starting to walk before they run. They want to illustrate some use cases in regards to professional networks.” He added that under Microsoft ownership, there will likely be additional resources that’ll let LinkedIn do some interesting things, especially around the area of conversation. “Over time, when you start to introduce Microsoft’s library of capabilities, there’s going to be some exciting things happening,” he said.

One could assume that, over time, LinkedIn could open up its messaging service and data to third-party developers to build relevant bots. However, while it’s still testing the waters, expect the company to explore other internal bot-like services to improve the messaging experience.

“We’re trying to create a foundation to help people have the conversations they want,” Hull said. “We have features to do basic collaboration work. The next step is to understand what people want to do with the conversations: Is it general preparation for meetings? Check-in code? LinkedIn is learning from the conversations.”

He continued: “The idea is to remind people that networking is an important thing, and conversations can be made easier.”