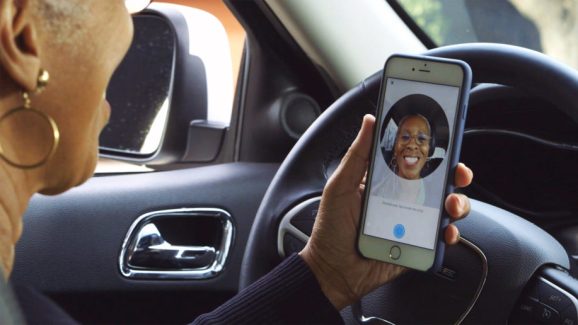 Uber is introducing a new security feature in cities across the U.S., one that requires drivers to verify themselves by snapping selfies periodically.

The etaxi giant first revealed plans for the Real-Time ID Check tool back in April, when it sent out email notifications to drivers informing them that they would soon be required to take occasional “clear, well-lit” selfies to match against the photo Uber has on file. This is to ensure that “you’re the only one who can go online with your Uber account,” the statement said. Uber has been testing the face-recognition smarts in China, a market that has had fake-driver problems in the past, with multiple drivers sharing a single account.

For the U.S.-wide rollout, Uber says it’s using Microsoft’s Cognitive Services to help match drivers’ file photos with their real-time selfie. “This prevents fraud and protects drivers’ accounts from being compromised,” explained Uber security chief Joe Sullivan, in a blog post. “It also protects riders by building another layer of accountability into the app to ensure the right person is behind the wheel.”

While Uber is touting this as helping to protect drivers from fraud, it’s likely designed to eradicate the practice of drivers sharing their accounts with friends, perhaps those who haven’t had security checks.

It’s not entirely clear how often a driver will be prompted to take a photo, but it seems that it will be random — so there will be no way of knowing when the prompt will happen. If the photos don’t match, the driver’s account is blocked until Uber can manually look into it — there could be an honest explanation after all, such as low lighting.

“We’re constantly developing and testing new solutions to prevent and reduce risks,” continued Sullivan. “During our pilot of Real-Time ID Check over the past few months, the majority of mismatches were due to unclear profile photos. And more than 99 percent of drivers were ultimately verified. Given that verification takes only a few seconds to complete, this feature proactively and efficiently builds more security into the app.”

Uber has faced criticism in the past for its lack of security, and this latest move represents one of a number of safety-conscious initiatives it has rolled out in recent times. For example, back in June, the company revealed it would give drivers daily reports on their driving, as well as a real-time speed display and reminders to take regular breaks.