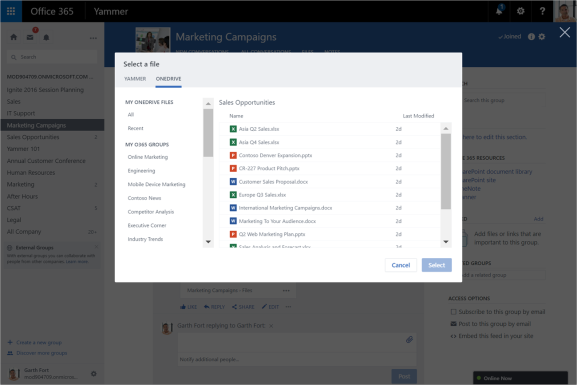 Picking files from OneDrive to share inside of Yammer.

Microsoft today provided new information about how it will be integrating Office 365 Groups into its Yammer enterprise-focused social network. The Yammer Enterprise service tier will be going away on January 1, 2017. But Yammer itself will remain available, and there are many levels of integration with the Office 365 services.

It will be possible for people to make Word, Excel, and PowerPoint documents using Office Online within Yammer, and it will be easy to go from Yammer to a shared OneNote notebook or the Microsoft Planner project management tool. Team members will be able to select existing files from OneDrive and SharePoint and share them with colleagues in Yammer, too. And Yammer teams will get their own SharePoint sites, enabling them to build wikis and blogs.

Microsoft will be rolling out the integration in phases, with the first phase beginning later this year, the Yammer team said in a blog post. The first Yammer customers to get it are those whose users log in with their Office 365 identity. And Microsoft will initially be targeting organizations with a single Yammer network connected to one Office 365 tenant.

The new integrations have implications for the way Microsoft sells Yammer. Microsoft is encouraging customers to migrate to its Office 365 plans. Effectively Microsoft will stop selling Yammer as a standalone service. (A support article has more detail.)

The changes will also affect what happens with data entered in Yammer. In the next few months Yammer Notes will be migrated into Word documents and will be accessible through the Files part of Yammer. But eventually Microsoft will replace Yammer Notes with group OneNote notebooks. More generally, over time Microsoft intends to “migrate all files stored in Yammer to SharePoint,” the Yammer team wrote.

What’s more, now people using Yammer will be able to have their shared conversations either in Outlook (courtesy of Office 365 Groups) or in Yammer — one or the other, but not both.

In a blog post in June Microsoft did mention that Yammer groups would be integrating with Office 365 Groups, and now it’s becoming clear how all this will work. Microsoft said in February that it was enabling Yammer by default for eligible Office 365 commercial customers.

Microsoft first acquired Yammer for $1.2 billion in 2012. As an individual product it has competed with VMware’s Socialcast, Facebook’s Facebook at Work, and Salesforce’s Chatter, among others, as well as more modern team communication tools like Slack.

Updated at 4:39 p.m. Pacific to clarify changes to shared conversations.