Every startup needs capital — money it can use to either get off the ground or ramp up growth. Knowing when to seek outside investment from venture capitalists can be a big decision for startups.

Unfortunately, too many startups don’t know enough about how the VC investor system works. Here are six things I think every startup entrepreneur should know about venture capitalists.

1. Understand what a VC is, and how a VC is different from an angel investor

In its early days, if a startup raises any money, it’s from people who know the entrepreneurs personally. These people — friends and family — will be happy to get a return on their investment eventually. But chances are, they are not investing solely to make a profit. The money they provide is what I call “love money.”

Moving up a notch, angels and VCs want a return on their investment.

Angel investors — most often past entrepreneurs themselves — have an interest in a particular city or industry, and because of that, are driven to take a chance on companies “closer to home.”

Venture capitalists are in it to make money, period. And they want that money over a certain time period — usually about seven years.

Nobody, angel or VC, is going to put a significant amount of money into your firm and walk away. In exchange for investment money, the early-stage entrepreneurs have to agree to let the new investors have a say in how the company operates. That means giving up a portion of your control and ownership.

2. Know how VCs make their money

VCs make their money by helping a young company grow and gain in value, and then cashing in a few years later when the company is sold or goes public.

They expect a huge return on their investment — 2 to 10 times of what they put in, or more.

Why so big a return?

Because not every firm with VC money succeeds. As a matter fact, of the companies that fail, more are VC-funded than not. The investors need impressive returns from some firms to offset the inevitable losses elsewhere.

It’s estimated that of all the firms VCs invest in: 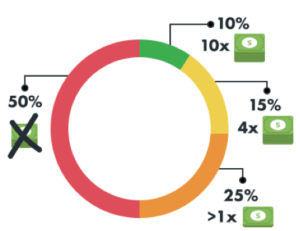 It’s also important to remember that VCs don’t make their money as they go. They make it in one lump sum, years after the initial investment. This mindset affects how they view their investments.

There are two basic ‘exits’ that allow VCs to make their money: either the company gets bought out (the acquisition exit) or it goes public (the IPO exit).

A VC fund is a pot of money that is raised from wealthy individuals or institutions, locked in place, and then placed into “fundable” companies.

Each fund contains a set amount of money, so that the investors can calculate the IRR (investment rate of return) on that amount. No new money is added to an individual pot. As a result, a venture capitalist will often have several active funds in its portfolio.

The money in a fund is not doled out all at once; the fund’s managers decide where and when. There is constant pressure to make investments in new and promising companies, because with each passing day the IRR is more difficult to achieve.

But keep in mind that when the time comes for the next round of investment, the fund’s managers can decide to cut off poorly-performing companies — no point in throwing good money after bad.

And so on through the next rounds of investment. With every round, they will focus more and more on the companies that are succeeding, while abandoning the poor performers.

4. Understand that you are giving up some control

When the VC signs the first cheque, the investor is given shares in the company in return — usually preferred shares, which among other things will help the investor reduce their investment risk.

If there are several investors, the one who wrote the biggest cheque is the generally the lead. The lead’s lawyer negotiates the terms, and the secondary investors follow along. The terms are often overlooked by entrepreneurs, who commonly focus more on getting the highest valuation possible. I would consider friendly terms to be far more important than a huge valuation. The more you push valuation, the more the terms will be written to protect any downside.

The lead investor usually gets a seat on your board. The lead may negotiate that board seat for him or herself, but the secondary investors may want observer status. Don’t worry too much about having an odd number of board members — if there is discourse on your board, you have bigger issues to worry about.

5. Understand that the VC investor will be your partner

Having a VC partner on your board offers a wonderful opportunity to tap into the skills and network of an individual who moves in business circles outside your own. Use your partner well, and you’ll be on the road to growth.

Because so much is at stake, it is critically important to pay attention to who that person is.

Choosing a VC partner is kind of like hiring an employee — except that you can’t fire them! Whether it works depends to some extent on whether you click. So it’s important that you choose someone with whom you get along and with whom you can build a good, trusting relationship. That partner is going to sit across from you at the board table for five to eight years.

There are advantages to different kinds of partners.

A partner who has been a business operator will have more empathy for the CEO, and will probably have a deeper understanding of the business. But that kind of partner can also get in the way. Precisely because they have some experience, they will want to give advice — and it may not all be good.

A partner who is a professional fund manager usually has an accounting background. That means they realize that while they know accounting, they may not be whizzes at operations. In other words they understand the limits of their knowledge.

If you get a good partner, hope that person stays.

If a partner who is your champion leaves the VC fund he or she is with, that fund will send in a replacement — someone who may not know you as well, someone who may have less of a stake in your success.

So it’s good to discreetly check out partners before they come in. Do they have a history of fund-hopping?

And while you’re checking, see if you can find out how a potential partner reacts when the company hits a rough patch. Look for someone who is patient and even-keeled.

Despite fears earlier this year that the VC market would dry up, it hasn’t. I know that because in the last few months I have fielded phone calls from several dozen of them. There is a tremendous amount of money in the system, and I think this is a very good time to be looking for VC money.

If you compare this year’s Q2 activity to the same period a year ago, VCs closed roughly 100 new funds (the same as 2015). However, they raised more money, with the average fund size now at $103 million, up from $78 million last year.

The bigger story is in the number of deals being done — and it’s noticeably down from last year. According to Pitchbook, there were 2,800 deals in Q2, 2016, compared to a staggering 4,400 in Q2, 2015. But, each deal this year is receiving a bigger cheque.

For the top-tier companies, this is good news. This combination, where there is heaps of fresh capital but a more cautious investor, means bets are being placed on only the best. Quality over quantity.

Allan Wille is a co-founder of Klipfolio, and its president and CEO. He’s also a designer, a cyclist, a father and a resolute optimist. Klipfolio is a dashboard software startup launched in 2011.