Flight search startup Hopper is introducing a big update to its airfare-predication app today, one that lets travelers nail down the best flight for their needs, not just the cheapest.

For the uninitiated, Hopper was founded out of Cambridge, Massachusetts in 2010, and it has gone on to raise $40 million in funding since its inception — including a $16 million round earlier this year. Its early years were largely focused on archiving trillions of flight prices, which now form the basis for its predictive algorithms. It wasn’t until early 2015 that the main Hopper app arrived for iOS, followed by Android several months later, serving to answer one simple question: Should I buy my flight now, or should I wait?

Contrary to popular belief, flight prices don’t always go up — they can go down, too. According to Hopper’s data, two-thirds of flights will drop in price at some point prior to departure, in part because airlines often set fares conservatively before adapting them to reflect demand.

So far, Hopper has chiefly served to find users the cheapest flight options, up to six months in advance, but flyers aren’t necessarily always after the absolute bargain basement option — they may wish to only book non-stop flights, for example, or to eliminate long layovers. With that in mind, Hopper is now rolling out filters that let users stipulate their personal travel preferences. 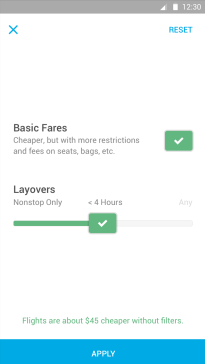 Arriving for Android first, with iOS to follow soon, Hopper’s updated search options will now let you remove “basic fares” — that is, airlines that offer significant restrictions, such as charging fees to choose seats or to include luggage over a certain size, and so on. But more notably, you can now choose to view only non-stop flights, or flights that have only a short layover.

On the surface, this may seem like a minor addition, but it fundamentally changes things for Hopper and opens the service up to millions more… shall we say, “discerning” users. Given that Hopper makes its money from airline commissions through bookings, it’s in the company’s interests to cater to as many people as possible.

From a technical standpoint, the company says the filters proved to be a complex data science problem.

“We’ve been working on this feature for about a year because it’s an incredibly complicated data science problem,” the company said in a blog post. “In fact, no other farecasting company has ever attempted to make predictions that are this granular. According to our backtesting, we’re also 95 percent accurate when making predictions with Watch Filters applied. This level of accuracy (and more importantly our users’ trust) is critical, so we wanted to make sure we got it right.”

Non-stop flights that exclude low-cost carriers (LCCs) are often more expensive than a mix-and-match approach, but Hopper data also reveals that the former are more prone to fluctuation, with the cheapest option often available no later than four months before departure. In contrast, the more flexible “cheapest” option often remains largely flat, with the cheapest tickets available as late as six weeks prior to departure.

Above: Cheapest vs. nonstop

Hopper unearthed a number of other useful statistical tidbits: Non-stop flights are usually 21 percent more expensive (than flights with layovers); nonstop flights are available for around two-thirds of all U.S. trips; filtering out long layovers typically doesn’t add much to the price of a ticket (while non-stop flights do); basic airfares can save an average of 16 percent on a flight.

You can check out Hopper’s official demo video of its new Watch Filters below.