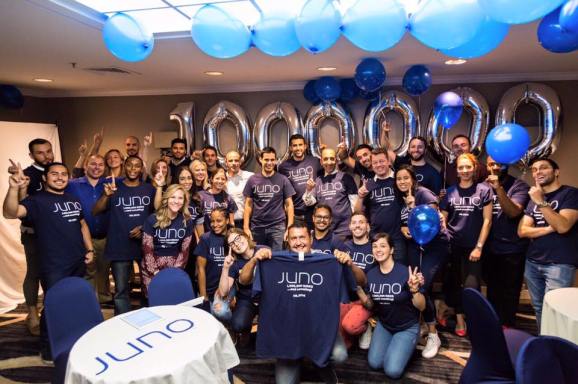 (Reuters) — Juno Inc, a startup looking to attract drivers from bigger ride-sharing rivals such as Uber Technologies Inc by offering them its own stock, is seeking $50 million in its biggest fundraising round to date, according to a person familiar with the matter.

Investors have poured more than $28 billion into the ride services sector over the past decade, propelling growth at Uber, Lyft Inc, China’s Didi Chuxing Technology Co and a host of smaller upstarts, such as Gett.

Economists have said there may be scope for even more competition, because ride-sharing services are relatively cheap to start, depend on contract labor with no inherent loyalty or specialized skills, and have free apps that can be downloaded in seconds.

Juno is working with investment bank Mizuho Financial Group Inc to find investors, according to the person, who asked not to be identified because the matter is confidential.

The person said Juno had previously raised $30 million from companies such as Japan’s Rakuten Inc and angel investors.

Chief Executive Officer Talmon Marco declined to comment on the funding, but hinted that Juno had ambitious expansion plans.

“Moving forward you should definitely expect to see Juno outside New York City, as for where and when it’s too early to discuss this,” Marco said in an interview. Mizuho could not be reached for comment.

To stand out in the crowded ride sharing market and compete with well-funded rivals, Juno distributes equity to drivers every quarter in the form of restricted stock units.

These stock units, which vest after a certain amount of time, can be cashed out after a “liquidity” event such as a sale of initial public offering, similar to incentives given to employees at technology startups.

“I don’t think our drivers are going to make millions, but they will potentially make a nice chunk of money in addition to their ongoing earnings,” Marco said.

Juno only allows drivers to join the company if they already drive for Uber and Lyft and have high ratings. While its prices for riders are comparable to its competitors, it also takes about 10 percent commission from drivers, a smaller cut than Uber or Lyft, Marco said.

When asked about how Juno will make money with a smaller commission, Marco said it spends less to recruit drivers.

Juno has brought on 16,000 drivers since starting its service in New York four months ago, Marco said.

(Reporting by Liana B. Baker in New York; Editing by David Gregorio)