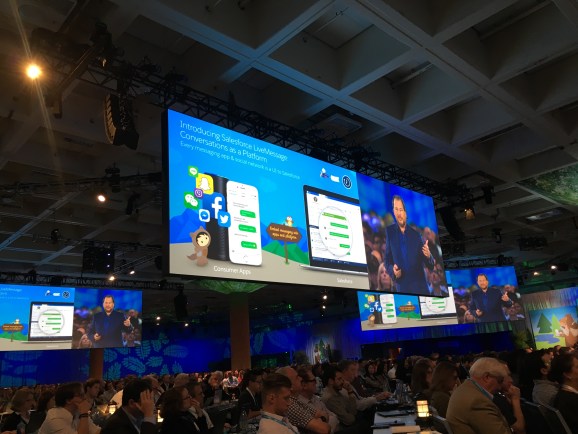 Marc Benioff announces LiveMessage for Service Cloud at the Dreamforce conference in San Francisco on October 5.

At its Dreamforce conference in San Francisco today, customer relationship management software company Salesforce announced the launch of LiveMessage, a feature of the existing Service Cloud product that will let customer support representatives communicate with customers across multiple messaging apps.

Speaking onstage during a keynote presentation, Salesforce cofounder and chief executive Marc Benioff said LiveMessage is a way to support “conversation as a platform” — that is, simple text-oriented messaging apps that are so common to individuals that can be and should be open to communication with businesses, too.

The announcement comes after Facebook, Microsoft, and even Oracle have launched tools that will help companies build chatbots that consumers can talk with on messaging apps. Microsoft chief executive Satya Nadella in the past few months has frequently spoken about conversation as a platform and specifically about how bots that participate in conversations with people effectively function as new apps.

Apps included in a slide shown during the presentation include Facebook, Twitter, WeChat, Line, and Viber. The Amazon Echo smart speaker was also shown.

Ken Yeung contributed to this story.