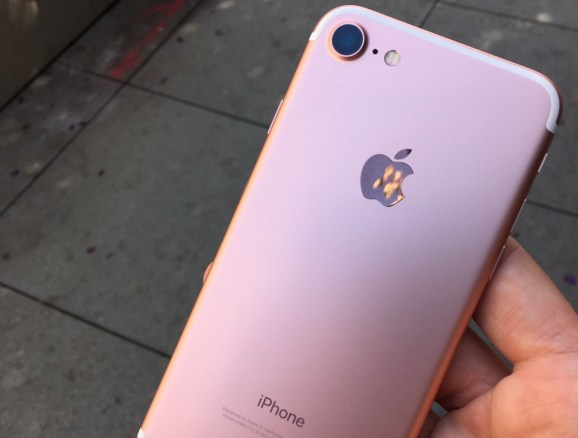 The back of the iPhone 7.

I’ve had an iPhone 7 for two weeks now, and I haven’t pulled my hair out owing to headphone jack problems.

Phone calls and music sound good to me on the Lightning earphones included in the box. And thanks to the headphone-jack-to-Lightning adapter that also comes in the box, I can use my favorite headphones with this new iPhone with no noticeable loss in audio quality. I’ve gone this long without losing the adapter.

But … there have been a few moments of real frustration that I never would have had if Apple had just done what it’s always done and included a 3.5mm jack in its phone. But no, Apple had to change things up.

My frustration has been triggered by two situations in particular.

First, when I want to use my headphones with any device other than the iPhone 7, but I only have my Lightning earphones on me, I am stymied. If I had been home when I found myself in this predicament this week, I would have been fine. But I was out, and it was annoying. I’ve spent some time looking for an adapter that could connect these Lightning earphones into a standard headphone jack, but I’ve found nothing yet.

The second predicament comes when the phone’s battery needs to be recharged but I’m still talking or listening through the Lightning earphones. Guess what? The phone will die if I keep that up. I had to cut off two phone calls in the past few days because of this. Belkin will soon start selling an adapter that lets you simultaneously charge and talk on your iPhone 7. But this dongle will realistically only be useful for the new iPhone (for now), unlike, say, a USB-A to USB-C adapter. And, of course, you’ll have to pay extra money for it — $40, to be exact. I could also buy Apple’s iPhone Lightning Dock with a headphone jack, or Apple’s Smart Battery Case that supports Lightning. But the former costs $49, and the latter costs $99.

Hmm. Maybe Apple was right, and wireless is the future. I can’t live like this. Bluetooth, here I come….