PayPal has announced that it’s rolling out as an additional payment option within Facebook Messenger, which currently supports payments via debit cards. 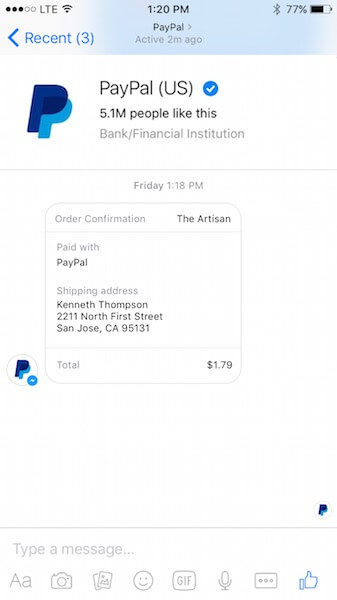 PayPal has been pushing to expand its reach into the consumer realm, having struck partnerships with MasterCard, Visa, Vodafone, and Alibaba, among other companies in the past few months alone. With Facebook Messenger on board, this opens PayPal up to a potential one billion users.

Facebook first unveiled plans to expand Messenger beyond a messaging app and into a platform last year, letting retailers connect with customers on one of the world’s most popular messaging services. Retailers including Everlane and Zulily were among the first partners announced, while big-name brands such as KLM have since signed up to embrace Messenger as a platform.

Available only to some users in the U.S. initially, PayPal customers will now be able to easily link their PayPal and Messenger accounts, and they’ll also receive payment notifications directly within the Messenger app.

Facebook has made no secret of its desire to push Messenger as a commerce tool. Last month, Messenger VP David Marcus revealed that Messenger bots could now accept payments directly within Messenger and that Facebook was working with a number of payment companies, including PayPal, to expand its reach. Indeed, Bill Ready, EVP and chief operating officer at PayPal, has now confirmed that merchants will soon “be able to accept PayPal payments directly in their bots,” too.

PayPal has worked with Facebook in the past — last year its Braintree subsidiary helped power a partnership between Facebook and Uber, while businesses have been able to pay for Facebook ads through PayPal for some years.

“This collaboration continues to showcase our march to be a customer champion,” said Ready. “We will continue to execute on our vision of offering PayPal in more places where people shop online, in app and in store by partnering with companies who share our desire to create meaningful products that benefit both consumers and merchants.”