ARM’s partners shipped more than 15 billion in 2015, generating $50 billion in chip sales. But Masayoshi Son, CEO of SoftBank, and new owner of ARM after September’s $31 billion acquisition deal, said in a keynote speech at the annual ARM developers conference that you haven’t seen anything yet.

At the opening of ARM TechCon in Santa Clara, California today, Son said he expects the Internet of Things (IoT), or enabling everyday objects to be smart and connected, will lead to an explosion of new technologies — just like the Cambrian Explosion enabled thousands of new species on Earth — that will lead to 1 trillion connected IoT devices. And that will lead to The Singularity, when machine intelligence exceeds the collective intelligence of humans, Son said.

Son started his speech with a slide on evolution. He noted that the trilobite was the first creature on Earth that had eyes, or the ability to sense and process the environment. And that creature lived during the Cambrian Explosion, a period around 500 million years ago, when thousands of species were born.

“More important, in the next 20 years, we will see 1 trillion Internet of Things devices,” he said.

“This is the first time on the Earth we will experience 1 trillion chips aggregating all kinds of data,” he said. “We can aggregate all sorts of analytics. This will give us intelligence. That will make us super smart. Security will be essential. Security becomes more important than doubling the clock cycle. Without security, this becomes so dangerous.”

He noted that cars already have 1,000 chips, including hundreds of ARM chips, and none of them are secure. As cars become connected and driverless, they will be susceptible to hacker attacks. Someone could launch a virus and turn it on all at once and crash every car on the highway, Son said. 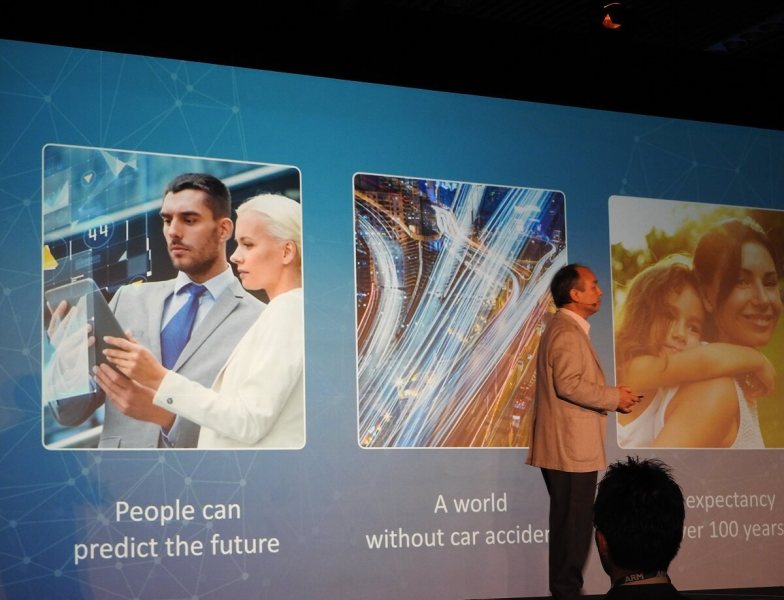 Above: Masayoshi Son, CEO of SoftBank, foresees life getting easier.

“I shouldn’t talk too much,” he said. “We shouldn’t give too much hint to the bad guys.”

But he noted that speech and visual recognition of artificial intelligence is already surpassing that of humans. With 1 trillion devices, we’ll get “super AI,” Son said.

When that happens, we’ll have a world where we can predict the future. There will be no car accidents. And we’ll live much longer, Son said.

“Some bad things could also be anticipated,” he said. “Whether we like it or not, this Cambrian Explosion is happening. Would you like to be on the side to be able to eat, or be eaten? We have to equip technology on our side. The one who evolves with this technology will make it happen.”