ARM chief technology officer Mike Muller has a fun job. He goes about collecting some of the most interesting things that customers are doing with the company’s microprocessor designs for the Internet of Things, or making everyday objects smart and connected. In a talk at the ARM TechCon event yesterday, he showed plenty of cool results, like a toaster that produces the day’s weather pattern on your toast.

These Internet of Things (IoT) applications could eventually boost ARM’s customer shipments from 15 billion chips a year in 2015 to something like a trillion devices a couple of decades from now (based on an estimate by ARM’s new owner, SoftBank CEO Masayoshi Son). They remind us that creativity could be an important part of making a popular vision of IoT into a reality.

“There’s an incredible amount of innovation going on in our business,” Muller said. “Whether it’s plastics, senses, smell. The things that people are coming up with are quite incredible.”

Even if Moore’s Law — which predicts that the number of components on a chip doubles every couple of years — slows down, the innovations show that people can make good use of the technological hand they’ve been dealt, he said.

As an example, Muller noted that ARM set up a challenge called “Wearables for Good,”  in which the rules were to create a low-cost invention that would be a force for good to help women and children in the world. The contest generated 250 entries from around the world. 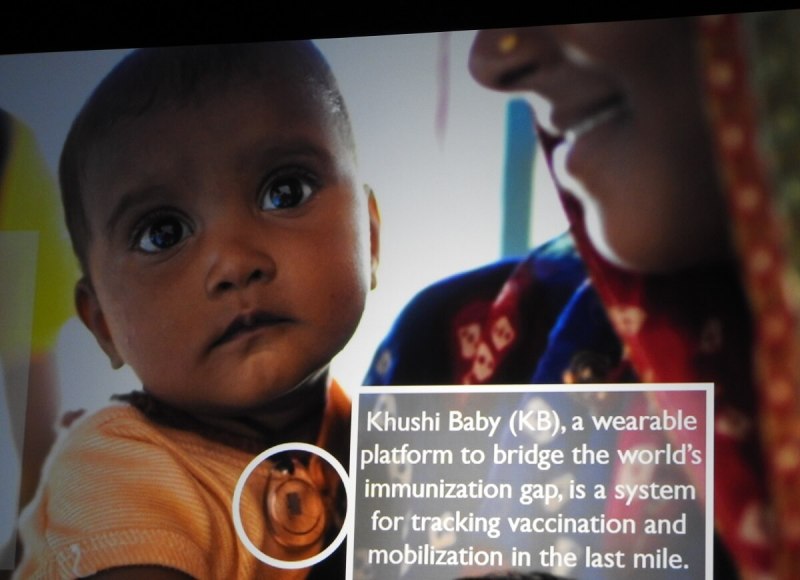 One of the winners, Khushi Baby, provides a plastic RFID tag in the form of a necklace that you can hang around a baby’s neck. That trinket requires no battery, but it can be scanned by healthcare providers, who can look at vaccination information for the child. It closes the gap in keeping patient records in under-developed countries.

“It’s a sign of how computing has been transformed,” Muller said. “It works. Healthcare providers with their phones can access the backend infrastructure to make it work. It brings together the high tech of the mobile revolution and some very low-tech solutions.” 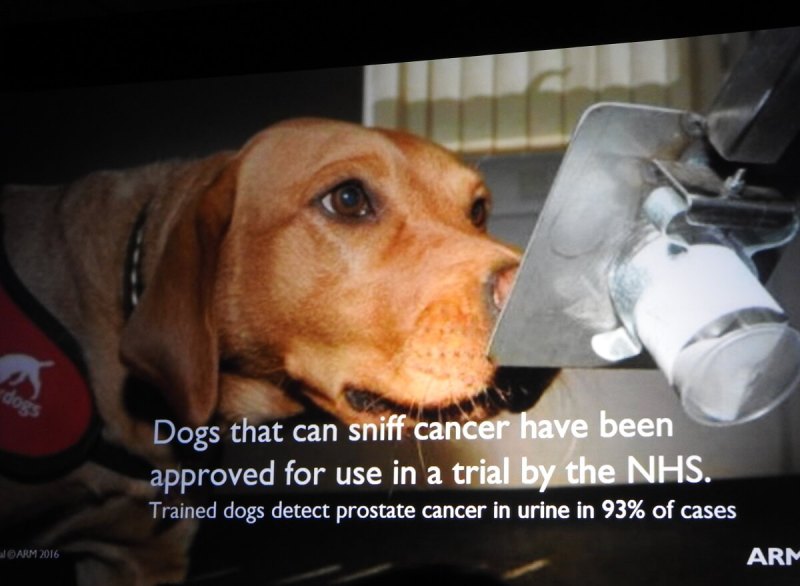 Above: Dogs can sniff to see if your urine shows signs of prostate cancer.

Muller said he has personally had to undergo testing for prostate cancer. In the research literature, he found a story about a dog that can sniff out prostate cancer. It seemed crazy, but it was an approved clinical trial under way in the United Kingdom.

“Maybe there is something real about this,” he said. “You really can smell prostate cancer in your urine. You can also smell people’s breath. It has a lot of chemicals. And, not surprisingly, there’s a link here to lung cancer.” 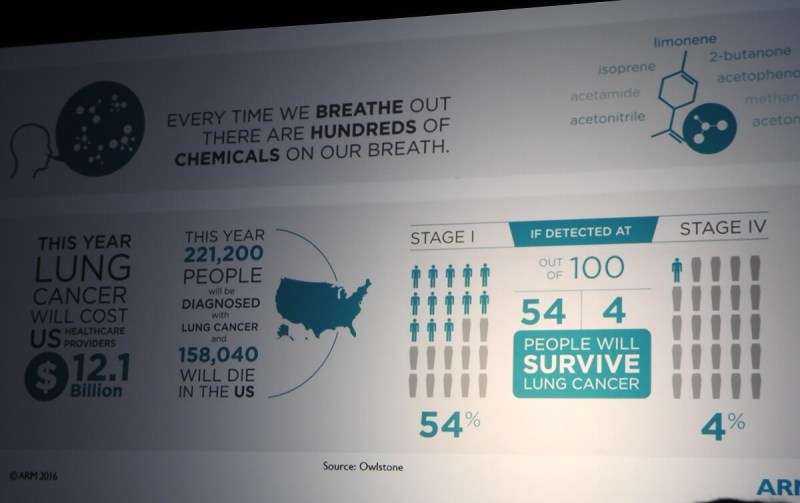 Above: IoT devices may be able to improve lung cancer detection.

Lung cancer is one of the biggest killers in the U.S., as only 54 out of 100 patients survive. But if you detect it early, that makes a huge difference for survival. The cost of the treatment exceeds $12.1 billion a year. To increase patients’ chances, a company called Owlstone Medical is creating a device that can analyze your exhaled breath and check for traces of lung cancer. The tech was funded by a military project that looked into smelling out explosives.

“It’s based on a small sensor, and so you can imagine in the not-so-distant future it can be the vehicle for doing a lot of detections on yourself,” Muller said. “The next project is looking into smell and detecting rectal cancer. To me, those are really interesting developments.”

ARM has been doing work on plastic electronics, with the original ARM microprocessor from years ago, and putting it on plastic patches. One application for this program, created by Unilever, is a disposable sensor that can detect your underarm odor and determine whether it should release more deodorant. 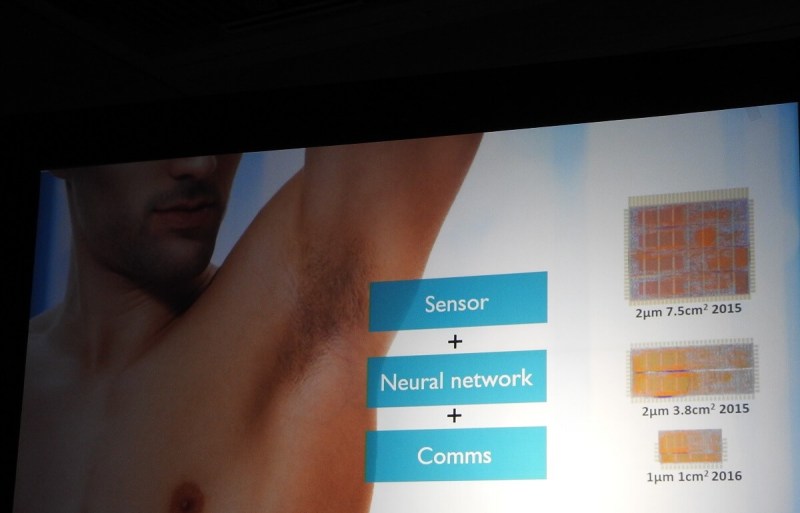 Above: A Unilever sensor can detect if you need more deodorant.

Muller shared that his brother-in-law has a brain tumor. He noted that MRI brain scans are very laborious, expensive, and unpleasant. But the University of Michigan developed a technology for tracking pressure in the eye for glaucoma patients. This technology uses a cubic-millimeter-size ARM chip, and it has been re-used to implant a sensor in the brain to detect pressure in the brain and detect a tumor, figure out its size, and sense when brain pressure is a problem.

“That is implantable electronics,” Muller said.

Back in 2001, Muller said he wished that someone would create a toaster that could show you what the weather is like. It so happens that right now there is a crowdfunding project on Kickstarter dubbed Toasteroid, which has raised more than $187,849 (beating its goal of $150,000) for a programmable toaster that can deliver a weather forecast on your toast.

“In the next year, I hope I will have my internet-enabled toaster,” Muller said.

Muller did bring up some serious issues with IoT technology. ARM announced a couple of secure chips for the Internet of Things on Tuesday, but providing security, trust, and privacy isn’t a solved problem, Muller said.

“There are 1,001 different projects. It does raise the whole issue of privacy,” he said. “There’s a big difference here between ‘Is my platform secure?’ and ‘Do I trust you with my data?'”

“That’s one of the big challenges we have going with IoT,” he acknowledged. 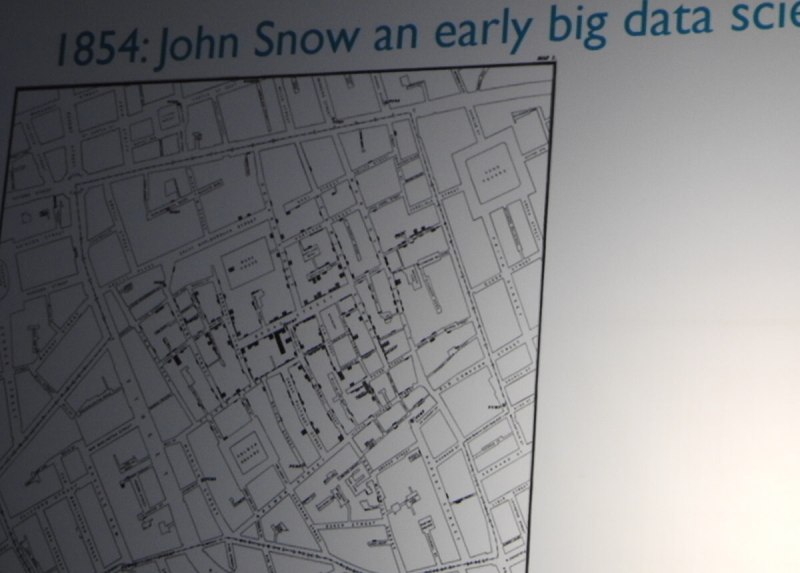 Above: The 1854 London cholera outbreak.

But the potential rewards are also huge. Muller pointed out the history of the outbreak of cholera in London in 1854, as documented by one of the first “big data” researchers, John Snow.

Snow looked at the epidemic and identified the root cause of the cholera, which was spread by a well with infected water. In the future, that kind of detection will be handled by big data analysis that can identify outbreaks before they become full-blown epidemics. Machine learning will lead to correlations that we never recognized before, Muller said.

Diarrhea kills more than 1.5 million children a year, Muller said. One of the things that can reduce that death rate is better hygiene. In one trial, someone had teachers wear soap on a rope. At the end of the class, the teacher had the children rub some soap on their hands. When they came back, they had to show their clean hands to prove they washed them.