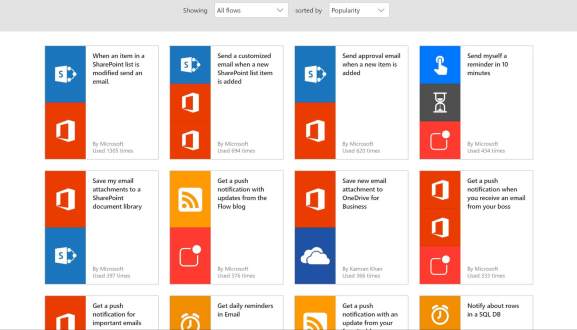 Microsoft is announcing today that it’s launching the Flow app integration service and the PowerApps codeless app building and sharing tool out of preview. PowerApps first launched last year, and it became available in preview in April, as did Microsoft Flow.

Since then, the two tools have racked up more than 160,000 users at 71,000 organizations, Microsoft corporate vice president James Phillips wrote in a blog post.

The apps are now available for anyone to use on Android and iOS; there’s a native Windows app for PowerApps, while Flow has a web app. Both apps are included with Microsoft Dynamics 365, as well as Office 365 Enterprise, Business Premium, and Essentials service tiers.

Plus, PowerApps can now use something Microsoft calls the Common Data Model.

“The Common Data [Model] stores your key business data in a secure Microsoft Azure-hosted database, organizing it in a standardized but extensible form — customer, lead, opportunity, employee, invoice, inventory item, product, task, contact, calendar and so on,” Phillips wrote. “This standardization makes it easy to create new applications and workflows that derive value from your data. And PowerApps, Flow, and Power BI are natively aware of this common data model, making it that much easier.”

PowerApps is a more modern way to build applications that draw from enterprise data repositories, including SharePoint. While PowerApps and Flow run on Microsoft’s Azure data center infrastructure, applications built with the PowerApps can incorporate data from companies’ on-premises data centers. And Flow can tap on-premises “gateways,” while also tying in to online services. That’s key for the many companies that want to use some of that data in modern apps that work on many devices.