Lenovo is today launching the Phab 2 Pro, the $499 phablet that’s notable for being the first phone to support the Google Tango augmented reality system. As such, these are the first devices that can run the new Tango applications that will be available through the Google Play Store, as well as the Tango app.

Lenovo first unveiled the Phab 2 Pro back in June. As a reminder, the 6.4-inch handset features a Qualcomm Snapdragon 652 chip, 4GB of RAM, 64GB of onboard local storage, a 4,050 mAh battery, a 16MP rear camera, sensors for Tango, and Android Marshmallow.

Last week, during a briefing with reporters at a Google office in San Francisco, I had a chance to spend time with one game built for Tango: Hot Wheels Track Builder, from famed toy company Mattel. Developed in conjunction with Milk Room Studios and Spectral Games, the game lets you shoot model cars down a track that you can customize within a playful virtual environment that’s superimposed over your physical surroundings. It’s one of more than 35 apps that support Tango, Google senior product manager Justin Quimby wrote in a blog post. (Others include Crayola Color Blaster, Solar Simulator, and Towers for Tango.)

After you launch a car and it falls right off the virtual table, you can walk up to its location in virtual space and examine it, just like you could if you were playing with real model cars. Doing that in real life might make those around you think that you’re immature, but Mattel believes this will be exciting for people who have been building up collections of Hot Wheels cars over the years, as well as for kids, of course.

For me, it was plain old nostalgia, and it made me feel playful in a way that I haven’t felt in a long time. The experience was so fun that I wondered if I could get back into the habit of playing with toy cars, even if they were digital. I found myself addicted, playing level after level. I delighted in seeing what would happen as I launched cars at different speeds, and I never got tired of looking at the tracks from different angles. In short, the game was immersive in a way that many other games aren’t. And so long as I was using the phone with both hands, it was never so heavy that I had to stop playing and put it down. 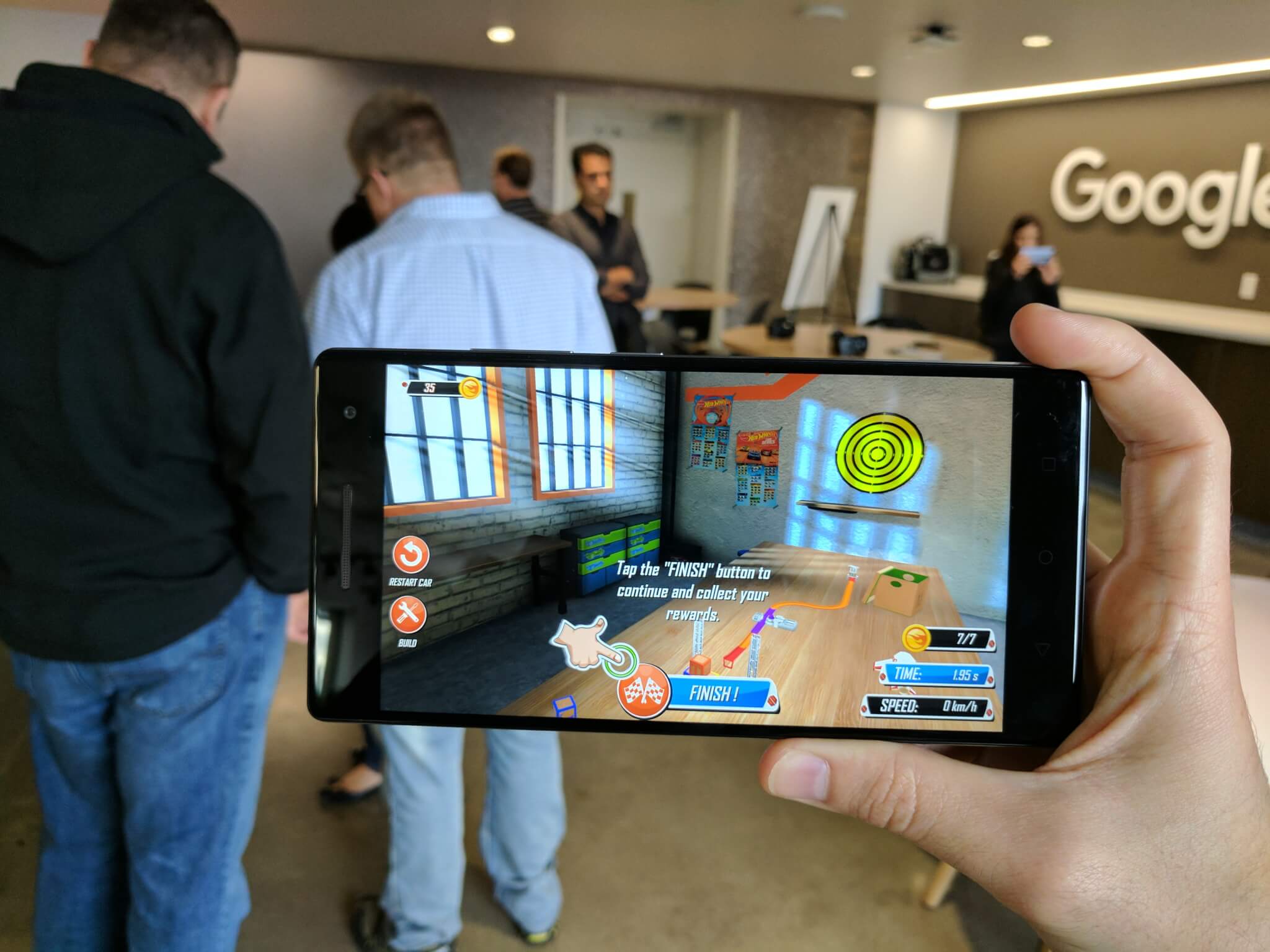 Unlike some virtual reality (VR) games, Hot Wheels Track Builder doesn’t become uncomfortable as you look around at different angles. Plus, it doesn’t cost a lot of money upfront. Once you’ve bought a Tango phone, you can install the game for free. If you stick with it and keep racking up points, you don’t ever need to buy anything.

That’s by design. Mattel isn’t trying to make a killing off this game, and so it chose not to monetize it heavily with in-app purchases, Mason Williams, Mattel’s senior manager of digital play production, told VentureBeat in an interview. After all, the company has other ways of bringing in money. In the third quarter of this year, Mattel brought in $236 million in net income on $1.79 billion in revenue from many brands, including one called Barbie. Last year, Mattel got attention for coming out with a View-Master Google Cardboard VR headset. Now the company is again working with Google, but this time on AR.

There are ways for Mattel to enhance the app further, like making it possible for people to make 3D scans of their model cars so they can race them in the app. But for now, it’s a wonderful start. And it’s just the right thing for the launch of the first Tango phone, because it makes me think I’m going to want this feature on my next phone.