Google today launched a significant update to Android Auto: The app can now be used right on the device’s screen. Android Auto is thus no longer a smartphone projection standard that must be operated using a car’s dashboard display. You can download the new version “in the coming days” from Google Play — it’s rolling out to the more than 30 countries where Android Auto is currently available.

Google launched the Android Auto mobile app in March 2015 with the goal of giving drivers an easier way to access information on their phone. There are now over 200 new car models from more than 50 brands that support Android Auto — today’s update is an attempt to bring a similar experience to older cars that are not compatible or don’t even have a built-in screen. 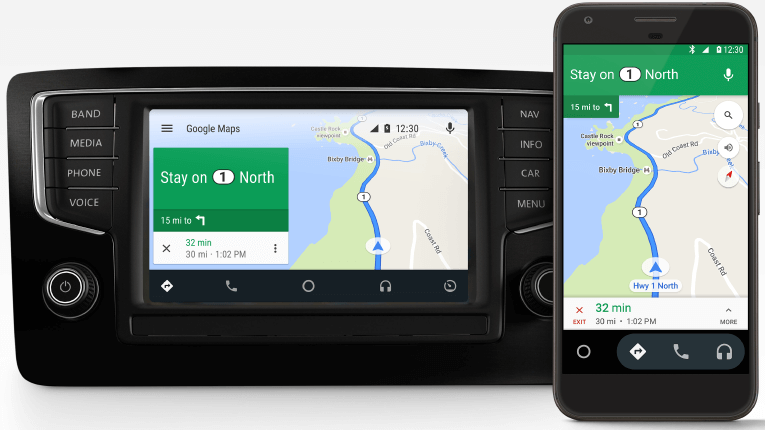 To take advantage of the new Android Auto, you’ll need a phone running Android 5.0 Lollipop (or higher), a data plan, and a car mount. In return you’ll get easy access to directions (turn-by-turn navigation with Google Maps), music (Spotify, Pandora, or Google Play Music), and communications (calls and messages with hands-free voice commands), without apps and notifications to things that aren’t essential while driving.

We had the opportunity to try the new Android Auto, and it performs just as you’d expect. The app takes quite a few taps to set up, but once that’s done, you get a very simple driver-friendly interface (pictured at the top). It’s possible to get away without using a car mount, but we wouldn’t recommend it.

Also noteworthy in this update is the ability to automatically start the app when the phone is paired with Bluetooth. That means if you have a Bluetooth-supported car mount, you don’t need to manually launch Android Auto on your phone every time you get in the car.

Finally, the “OK Google” hotword is coming to Android Auto “in the coming weeks.” We asked Google what exactly this means and were told that the hotword will work for existing hands-free voice commands. Currently, you have to tap on the microphone icon to use them or press the voice command button on the steering wheel in some compatible cars. But soon you’ll be able to just say “OK Google” and keep your eyes on the road.