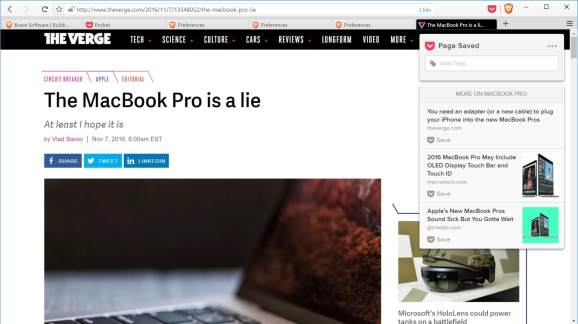 Pocket in Brave for Windows.

Brave Software, the company behind the open source Brave web browser with native ad-blocking capability, today released version 0.12.8 for Mac and Windows, and the update lets you easily turn on a new extension: the Pocket tool for saving articles to read later.

To turn on the feature, you’ll want to update to the latest version, and then you’ll want to go to Settings in the hamburger menu, select Advanced, and click “enable Pocket.” (On Mac you’ll select Preferences in the hamburger menu.) Once you have, you’ll see the Pocket logo pop up in the top right corner of the browser window, making it possible to add things to your Pocket after you’ve logged in.

Pocket is available for other browsers, including Chrome, Edge, Firefox, Opera, and Safari. Since its launch in January, Brave has been limited in terms of supporting third-party browser extensions. Still, Brave does stand out for its ability to block ads, trackers, scripts, and cookies, as well as its ability to let users pay the sites they visit the most.

Today’s release comes a few days after Brave Software rolled out its second-generation Android app with tabs instead of link bubbles. Brave Software is currently considering whether to incorporate the Pocket extension into its Android and iOS apps, a spokesperson told VentureBeat in an email.

Pocket has more than 25 million users, and recently it introduced an Explore feature.