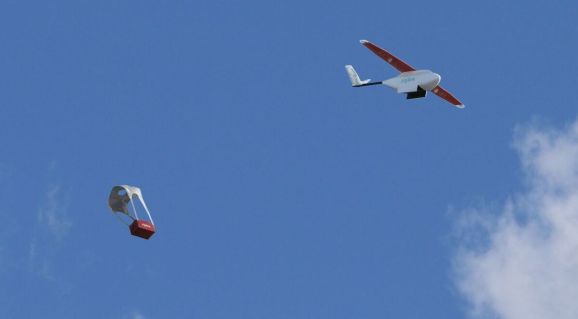 Drone delivery startup Zipline has closed a $25 million series B round of funding led by Visionnaire Ventures, with participation from Sequoia Capital and Andreessen Horowitz.

Founded out of San Francisco in 2011, Zipline is a robotics company that builds autonomous drones designed to deliver vaccines, medicine, or blood on request from health workers operating in hard-to-reach areas. Just last month, Rwanda launched what is considered the world’s first commercial national drone service, with Zipline soon making up to 150 flights each day, delivering blood to 21 transfusion facilities around the country using routes that are pre-programmed into the vehicle.

Zipline has entered into an international partnership with UPS, Gavi, and the Vaccine Alliance to cover medicines and vaccines too, and a spokesperson has confirmed to VentureBeat that the company has signed a bunch of additional drone delivery contracts that it has yet to announce.

The company has also revealed plans to initiate drone deliveries in the U.S. within the next six months, in partnership with the White House and the U.S. Federal Aviation Administration (FAA). Indeed, the FAA recently introduced new drone regulations designed to “harness new innovations safely, to spur job growth, advance critical scientific research, and save lives,” it said. The rules are targeted at unmanned aircraft weighing less than 55 pounds carrying out “non-hobbyist operations.”

A number of big-name companies such as UPS, Fedex, and Amazon are known to be testing the waters ahead of introducing commercial drone delivery services of their own, and the Obama administration estimates that the industry could be worth some $82 billion by 2025. In the past few months alone, a number of drone-focused companies have attracted investment, including Saildrone, which grabbed $14 million for seafaring drones that capture ocean data. Elsewhere, DroneDeploy closed a $20 million round for its software-as-a-service (SaaS) platform for commercial drone operators, Prenav drew in $6.5 million to help companies inspect their properties using automated drones, and PrecisionHawk nabbed an $18 million round for its land-surveying drones.

“Zipline is the best possible combination of social impact and business impact. It’s a smart investment that will help save lives,” said Susan Cho, Visionnaire Ventures cofounder and managing partner. “We look forward to what the future holds for Zipline and the countless people who can benefit from the company’s lifesaving technology.”

The company says it will use its new funds to expand its drone delivery service across Africa and other markets globally. “The inability to deliver life-saving medicines to the people who need them the most causes millions of preventable deaths each year,” added Zipline CEO Keller Rinaudo. “Zipline will help solve that problem once and for all. We’re building an instant delivery system for the world, allowing medicines and other products to be delivered on-demand and at low cost, anywhere. This new funding will help make that vision possible much sooner.”