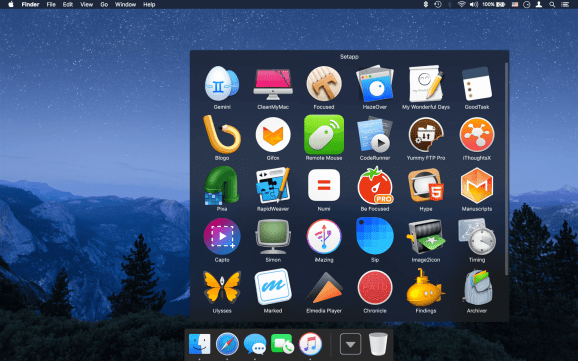 As Apple’s Mac App Store has exploded in size and popularity, it has also faced a growing number of complaints from developers. It can be hard to get your app discovered, there is frustration with terms of service, and updates can pose challenges.

Ukrainian-based MacPaw, maker of popular apps such as CleanMyMac, thinks it has a solution that would drastically change the way users find and pay for apps. According to Oleksandr Kosovan, founder and CEO of MacPaw, the search for an alternative was motivated by his own company’s experience on the Mac App Store.

MacPaw’s solution: a new service called Setapp. With Setapp, users pay $10 each month and receive unlimited access to a suite of curated apps forever. No in-app purchases. No need to possibly pay for upgrades. And the apps are already in a folder on your Macbook if you want to download and install them.

Kosovan said he has a lot of love for Apple and the Mac. His company has built a nice business over the past eight years, one that brings in $25 million in annual revenue with its own software for the Mac.

But MacPaw has also been frustrated by some of the limitations of the Mac App Store. He noted that there is no ability to try software before you buy it — beyond the ability to try stripped-down versions with limited features. Refunds are not allowed. And finding the right software through search, customer ratings, and reading descriptions can be time-consuming and frustrating. That means that many developers don’t even put their software in the Mac App Store, preferring to sell it directly.

Earlier this month, MacPaw began its private beta testing of Setapp, which the company believes reduces risk, creates more flexibility, and delivers a better experience for developers and users.

MacPaw is in the process of signing up partners, but 45 developers have already made their software available for the subscription service. On MacPaw’s end, the team tests the software and evaluates it before inclusion to ensure the quality is high, he said.

Users who sign up for the subscription download the Setapp software, which creates a folder on their Mac. Inside the folder is the suite of apps. Users can then click on any app to install it. They continue to have access to the software and the folder as long as they are paying for the subscription, and updates are delivered continuously.

“It’s always up to date and you don’t have to pay extras,” Kosovan said. “We want to go away from major upgrades, but rather [offer] continuous updates so you always feel like you have the latest version.”

Kosovan said developers of the apps in Setapp are still allowed to sell their software directly to users, or via the Mac App Store. There’s no exclusivity.

“We see this as an additional opportunity,” he said.

The company has funded the development on its own, so far. It hopes to launch a closed beta to more customers next month, followed by a public launch in late January. It’s still hoping to sign up a handful of additional developers to be part of the beta and launch.