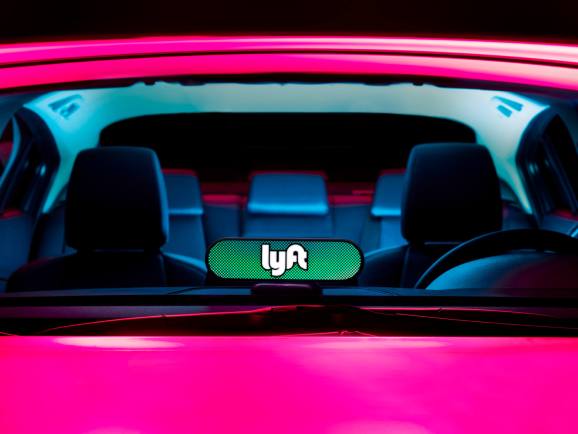 Lyft — which completed more than 17 million rides in October, up more than double year over year — believes it has outgrown its signature big, fuzzy, pink mustaches that drivers stuck to their car grilles, and the smaller dashboard-mountable digital mustaches that have replaced them. The new signs, which Lyft wants drivers to stick to their dashboards, can be programmed to light up in six colors: green, orange, purple, silver, teal, and yellow. Through Lyft’s app, riders will know which color to look out for, and they’ll be able to hail cars with their phones as they emit the correct color. The back of the signs can show customizable messages, too.

Next month, Lyft will start giving Amp to any of its drivers who want it, free of charge — rolling the feature out initially in Las Vegas, Los Angeles, New York, and its home turf of San Francisco, ahead of the inevitable surge on New Year’s Eve.

The signs will lead to a return on investment “that will be measurable and positive,” Lyft vice president of product Tali Rapaport told reporters in a briefing at company headquarters earlier this week. But Amp is also meaningful because it can make the experience “more seamless” for both drivers and passengers, Rapaport said. Presumably, people will spend less time trying to figure out which car is theirs, particularly late at night when reading license plates can be difficult.

The Amp signs should also help Lyft vehicles stand out from those of archrival Uber. To further stress the difference, Lyft is kicking off an advertising campaign called Ride on the Bright Side. New Lyft television commercials will poke fun at Uber, without actually referring to Lyft’s competitor by name. The tone these ads strike differs from that of Lyft’s initial campaign.

At least initially, Lyft will determine the color for each rider, so that not everyone chooses the same one. (Red was not an option, because Lyft did not want to get in the way of law enforcement agencies using the color.) While the signs can be centrally controlled, Lyft doesn’t see advertising as a primary use for them, Rapaport said. Lyft could choose to employ the signs to indicate emergencies, because they are programmable, but the company won’t be doing that from the outset.

The new signs are meant to be used in cars that are driven by people. But their application could go beyond that.

“I’d say this is absolutely an extensible solution in a world where there isn’t a driver in a car,” Rapaport said. “We built this to help improve the ride experience today but … we believe it also works well in that world.”