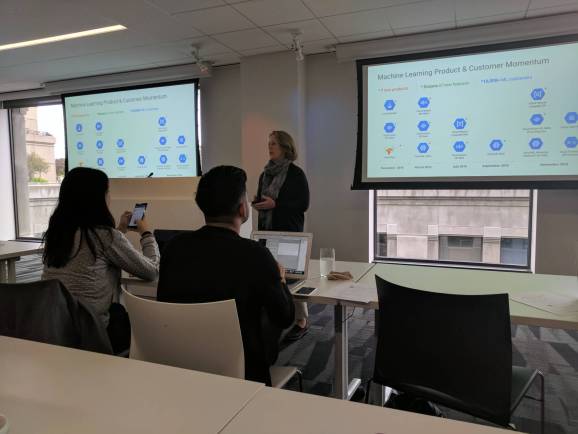 During a media briefing at a Google office in San Francisco today, Google announced that it will launch virtual machine (VM) instances that are backed by graphics processing units (GPUs) early in 2017 through its Google Cloud Platform public cloud.

Competitors Amazon Web Services (AWS), IBM SoftLayer, and Microsoft Azure have launched GPU-backed instances in the past. Google is looking to stand out by virtue of its per-minute billing, rather than per-hour, and its variety of GPUs available: the Nvidia Tesla P100 and Tesla K80 and the AMD FirePro S9300 x2.

This cloud infrastructure can be used for a type of artificial intelligence (AI) called deep learning. It’s in addition to Google’s custom-made tensor processing units (TPUs), which will be powering Google’s Cloud Vision application programming interface (API). The joint availability of GPUs and TPUs should send a signal that Google doesn’t see TPUs as being a one-to-one alternative to GPUs.

Also today Google announced the formation of a new Cloud Machine Learning group. Google cloud chief Diane Greene named the two leaders of the group: Jia Li, the former head of research at Snapchat, and Fei-Fei Li, the former head of Stanford’s Artificial Intelligence Lab and also the person behind the ImageNet image recognition data set and competition. As Greene pointed out, both of the leaders are women, and also respected figures in the artificial intelligence field.

It’s also launching a new Cloud Jobs API in alpha. The API will make it easy for companies to provide sophisticated job search tools for their customers.

Also new: a Cloud Translation API Premium tier, which can do a better job than the Standard tier (aka the regular Google Translate API) when it comes to video livestream translations; website translations; translations of files such as emails, articles, PDFs; and human-assisted localization and translation services.