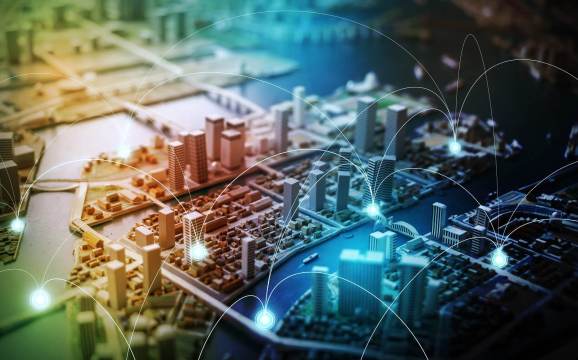 The Internet of Things (IoT) is a fast-growing industry destined to transform homes, cities, farms, factories, and practically everything else by making them smart and more efficient. According to Gartner, by 2020, there will be more than 20 billion connected things across the globe, powering a market that will be worth north of $3 trillion.

But the chaotic growth of IoT will introduce several challenges, including identifying, connecting, securing, and managing so many devices. It will be very challenging for the current infrastructure and architecture underlying the Internet and online services to support huge IoT ecosystems of the future.

This is something that can perhaps be solved through blockchain, the distributed ledger technology behind cryptocurrencies such as Bitcoin and Ethereum, which is proving its worth in many other industries, including IoT.

Blockchain will enable IoT ecosystems to break from the traditional broker-based networking paradigm, where devices rely on a central cloud server to identify and authenticate individual devices.

While the centralized model has worked perfectly in the past decades, it will become problematic when the number of network nodes grows into the millions, generating billions of transactions, because it will exponentially increase computational requirements — and by extension the costs.

The servers can also become a bottleneck and a single point of failure, which will make IoT networks vulnerable to Denial of Service (DoS/DDoS) attacks, where servers are targeted and brought down by being flooded with traffic from compromised devices.

This can critically impact IoT ecosystems, especially as they take on more sensitive tasks.

Moreover, centralized networks will be difficult to establish in many industrial settings such as large farms, where IoT nodes will expand over wide areas with scarce connectivity gear.

Blockchain technology will enable the creation of secure mesh networks, where IoT devices will interconnect in a reliable way while avoiding threats such as device spoofing and impersonation.

Several companies are already putting blockchain to use to power IoT networks. One example is Filament, a startup that provides IoT hardware and software for industrial applications such as agriculture, manufacturing, and oil and gas industries.

Filament’s wireless sensors, called Taps, create low-power autonomous mesh networks that enable enterprise companies to manage physical mining operations or water flows over agricultural fields without relying on centralized cloud alternatives. Device identification and intercommunication is secured by a bitcoin blockchain that holds the unique identity of each participating node in the network.

Since most smart home devices are controlled through mobile apps, Telstra further expands the model and adds user biometric information to the blockchain hashes in order to tie in user identity and prevent compromised mobile devices from taking over the network. This way, the blockchain will be able to verify both the identity of IoT devices and the identity of the people interacting with those devices.

Catering to the future of IoT

While still in its early development stages, IoT is mostly comprised of technologies that allow for data collection, remote monitoring, and control of devices. As we move forward, IoT will transition toward becoming a network of autonomous devices that can interact with each other and with their environment and make smart decisions without human intervention.

This is where blockchain can shine and form the basis that will support a shared economy based on machine-to-machine (M2M) communications.

We’re already seeing initiatives emerging in this field, including ADEPT (Automated Decentralized P2P Telemetry), a decentralized IoT system created by IBM and Samsung, which enables billions of devices to broadcast transactions between peers and perform self-maintenance.

The platform has been tested in several scenarios, including one that involves a smart washing machine that can automatically order and pay for detergent with bitcoins or ethers when it runs out and will be able to negotiate for the best deal through smart contracts based on its owner’s preferences.

As the backbone of all of these interactions, blockchain creates a secure and democratized platform that is independent and levels the field for all involved parties, making sure everyone plays fair and no single entity is in control.

Blockchain will also enable data monetization, where owners of IoT devices and sensors can share the generated IoT data in exchange for real-time micropayments. Tilepay, for example, offers a secure, decentralized online marketplace where users can register their devices on the blockchain and sell their data in real-time in exchange for digital currency.

Blockchain and IoT also have interesting use cases that can help make renewable energy sources mainstream, where energy produced by IoT solar panels generates cryptocurrency value that is registered on the blockchain. Anyone joining the network can make investments in renewable energy technology. Organizations such as Nasdaq and Chain of Things, a think tank that conducts research on alternative applications for blockchain and IoT, are exploring this field.

Blockchain presents many promises for the future of IoT. Challenges still remain, such as consensus models and the computational costs of verifying transactions. But we are still in the early stages of blockchain development, and these hurdles will eventually be overcome, opening the path for many exciting possibilities.