There are more than 60 applets on IFTTT that extend the functionality of the Google Assistant. With them, you can purify the air, set mood lighting for a party, and control home appliances and smart cars.

You can also create posts for Facebook, Twitter, and LinkedIn, and send messages on Slack, Salesforce, and Skype.

Formerly known as recipes, Google Assistant applets were released last month and precede the launch of Actions on Google, a bot creation platform scheduled to launch next month, and the software development kit due out next year.

Here’s what it’s like to create social media posts and send messages with Google Assistant and IFTTT applets. 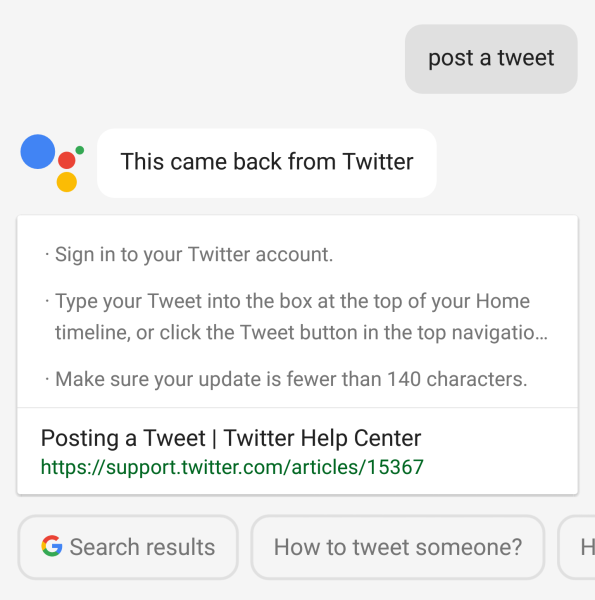 I also found Google Assistant has difficulty understanding lingo and vernacular terminology that does not exist in the Webster’s Dictionary. This can feel a bit restraining, because the words Google Assistant picks up when lingo is spoken quickly highlight Google Assistant’s lack of ability to recognize how people talk or communicate on Twitter or in social media.

The tweets I sent appeared minutes after the action was carried out on IFTTT, so tweets were not sent immediately.

Another issue: no hashtags. Any attempt to use a hashtag results in Google Assistant hearing “hashtag” instead of the # hashtag symbol.

Even if hashtags were possible, they would be problematic for Google Assistant, since it often fails to recognize names, idiomatic speech, or words that aren’t in Webster’s Dictionary. So many tweet hashtags are based on a combination of words and sometimes slang, and the assistant has trouble recognizing them. More on that later. 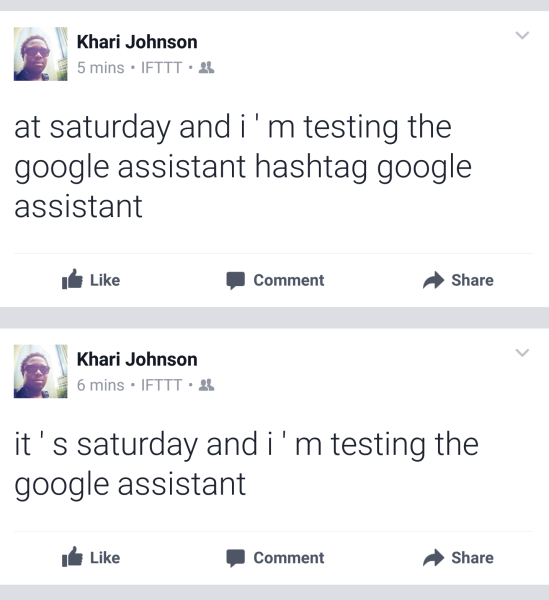 In fact, it’s so very fast and easy to use that you may regret its convenience. The applet doesn’t give you a chance to edit text before it’s published, so you better get it right or you may end up using Google Assistant to post a status update, then opening the Facebook app to edit your post because the Assistant failed to capture everything you said. That’s the exact outcome an intelligent assistant wants to avoid, because if you don’t get it right the vast majority of the time, then an intelligent assistant becomes a waste of time.

When posting an update on LinkedIn or anywhere else on social media, one limitation that appears to be true is that nothing can be too long. Anything more than 10 to 20 words can results in a search query for “post to LinkedIn” instead of an actual LinkedIn post.

For example, “working on a story draft” works, but the long passage I tried below does not. 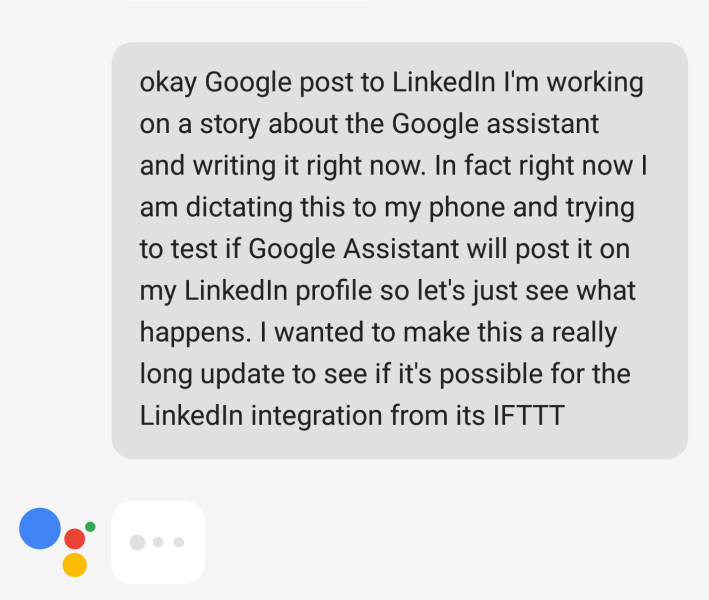 Do not expect to rattle off long, uninterrupted soliloquies to the social media universe with Google Assistant. You can only make snappy updates, with no images, links, commas, or hashtags. Speech-to-text communication is increasingly advanced and worth using. That’s the case with the LinkedIn post as well, so long as you accept the limitations. 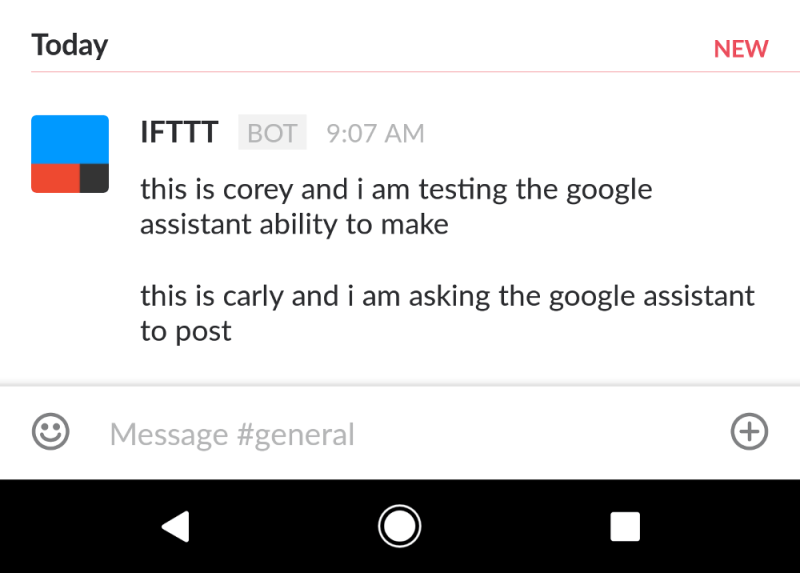 The problem with using Google Assistant to send Slack messages is that you cannot send direct messages. Messages can only be sent to Slack channels.

So if you’ve got a favorite channel, and you see the messages pinging back and forth, using your voice to reply to messages can be a pretty useful feature. I have watched the flurry of messages go back and forth in Slack storms before and been unable to type quickly enough to join in. Slack storms, the kind that distract and take up a lot of energy during the day, may be a perfect use case for this Google Assistant skill.

Another downside: Slack messages sent with Google Assistant show as coming from the IFTTT Bot instead of the sender’s username.

This is no IFTTT applet, just a standard part of the Pixel smartphone. SMS is where Google’s machine learning falls short. My siblings and I have names of African descent, and when I try to send them messages, Google doesn’t understand who I’m asking for.

Repeatedly “Shaka” became “Becca,” “Zahra” became “Sarah,” and “Saran” became “Karen.” If your name is Gary or John, SMS with Google Assistant works pretty well, but it seems to have difficulty recognizing names that are not common in the western world.

Trello is an important part of my workflow, so the first thing I did with Google Assistant was create an applet that creates a Trello card every time I have a story idea.

An IFTTT level of customization does not exist with other virtual assistants (though Alexa also has IFTTT applets). Siri won’t allow me to make custom Trello cards, not yet anyway — even though Siri has been open to third-party developers for almost six months.

In this article, we went through about half a dozen common use cases, but you can also create connections to send messages to enterprise chat apps like GroupMe, Cisco Spark, and Salesforce, and other software teams use to work together, like GitHub and Evernote.

Come what may from the soon-to-be Google Assistant developer community, when each individual is able to identify the 20- to 30-odd tasks they do regularly and automate them, it significantly changes how you look at an intelligent assistant.