DockATot has sold nearly $12 million worth of its well-designed baby lounger in the past year. Now the company has come up with CloudTot, a monitor that detects moisture and alerts the parent if the baby has wet the bed.

By adding a tech component, DockATot is joining the Internet of Things, or making everyday objects smart and connected. The CloudTot product will come out in the summer of 2017, and it will be shown at the 2017 Consumer Electronics Show (CES) in Las Vegas, January 5 to January 8.

“The idea was take the product that helps babies sleep well and combine it with the smart monitoring system,” said Elina Furman, director of marketing at DockATot, in an interview with VentureBeat. “It’s a backward compatible, smart baby bed that is part of a product that is sweeping the nation.”

DockATot was the inspiration of Lisa Furuland, a Swedish entrepreneur who had a baby in 2006. She searched unsuccessfully for an alternative to the blanket, cot, and baby lounger. She wanted something more snug. She thought of the docks in her hometown as safe harbors, and so she applied that idea to creating a baby lounger.

The self-funded product debuted in July 2015 in the U.S., and it became one of the top baby products, according to Baby List Registry. Celebrities such as Kim and Kourtney Kardashian raved about the product, helping it get into the public eye.

Now the company is converting the DockATot product into a smart monitor that is able to detect if your baby is breathing normally. If the baby stops breathing for 12 seconds, the device will send a notification to the parent, and its unique feature, called Pep Peg, will also “nudge” the baby to move into a new position. It can also detect moisture and alert the parent if the baby has wet the bed. And it detects nursery temperature and noise level. 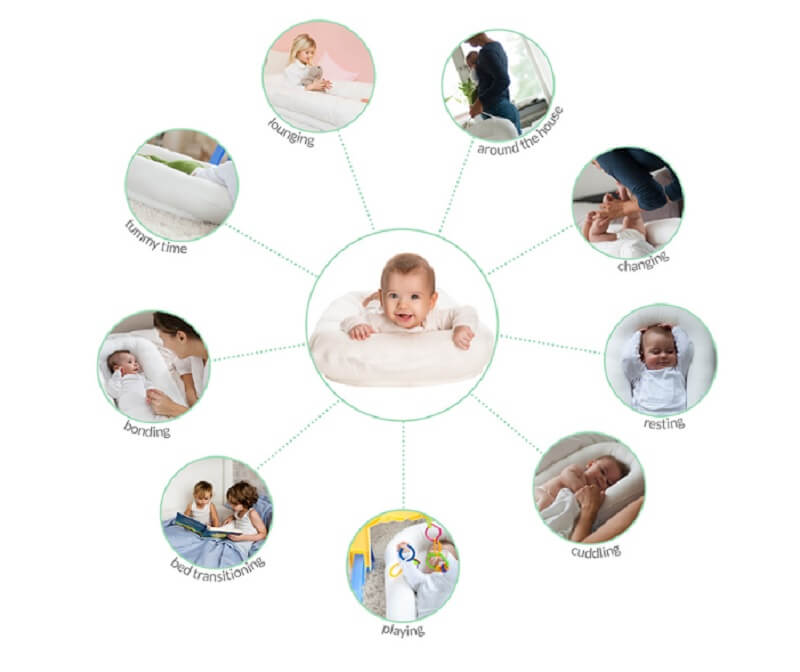 Above: DockATot has been a huge hit in the past year.

“It is a product where parents can put the baby in and have peace of mind,” Furman said.

CloudTot will use sensors that Furuland says will make it the “the smartest baby bed system on the market today.”

The system uses “conductive fabric” to detect wetness, Furman said. That fabric is woven into the surface of the bed. If wetness comes into contact with the fabric, it disrupts the electrical connection (which is not going to be large enough to harm the baby). The system deals with the problem of babies sleeping in wet diapers during the night, when the parents are also sound asleep. It is also designed to be taken apart so it can be laundered, Furman said.

The CloudTot app will work with both Apple’s iOS and Android devices. It has a “Baby DJ” feature that comes with a selection of soothing white noise tracks. It can also play prerecorded sounds and music to help soothe a baby during rest time. It records real-time baby information, such as feeding, sleeping time, diaper changes, growth charts, doctor appointments, and vaccines. DockATot sells for between $165 and $290. A price for CloudTot hasn’t been set yet.

Of course, there are a lot of baby monitors out on the market, but I haven’t heard of any with as many features as CloudTot will have. The company is talking about it early and is excited to be showing one of its advanced prototypes at this year’s CES.

“We’ve been getting a lot of questions, and we want to be able to help customers plan,” Furman said. “We want to solve pain points in a way that no one ever has before.”