HP has done a great job of following up on its Spectre x360 convertible laptop. The size is greatly improved, while the touch display, performance, and build quality are just as good as they were last time.

In short, this is among the best Windows laptops of the year. As such, it may be a viable alternative to the refreshed MacBook Pro, which has shortcomings and a higher price tag.

It brings the best of its larger 15-inch sibling and less of its bulk.

The bezel is very narrow on the left and right sides of the display. (But not on the top, because there you find the camera and infrared sensors for Windows Hello.) It’s not quite as maxed out as the Dell XPS 13, but it is pushed back enough to squeeze the display into a footprint measuring about 12 inches by 8.5 inches (last year’s model was closer to 13 inches long).

And it’s not just smaller — it’s also slightly thinner. The new Spectre x360 isn’t as thin as the Spectre 13, but that’s the thinnest laptop in the world, and it isn’t the sturdiest thing you can buy. This laptop, by comparison, feels dense and powerful — even though it is almost half a pound lighter than last year, at 2.85 lbs. 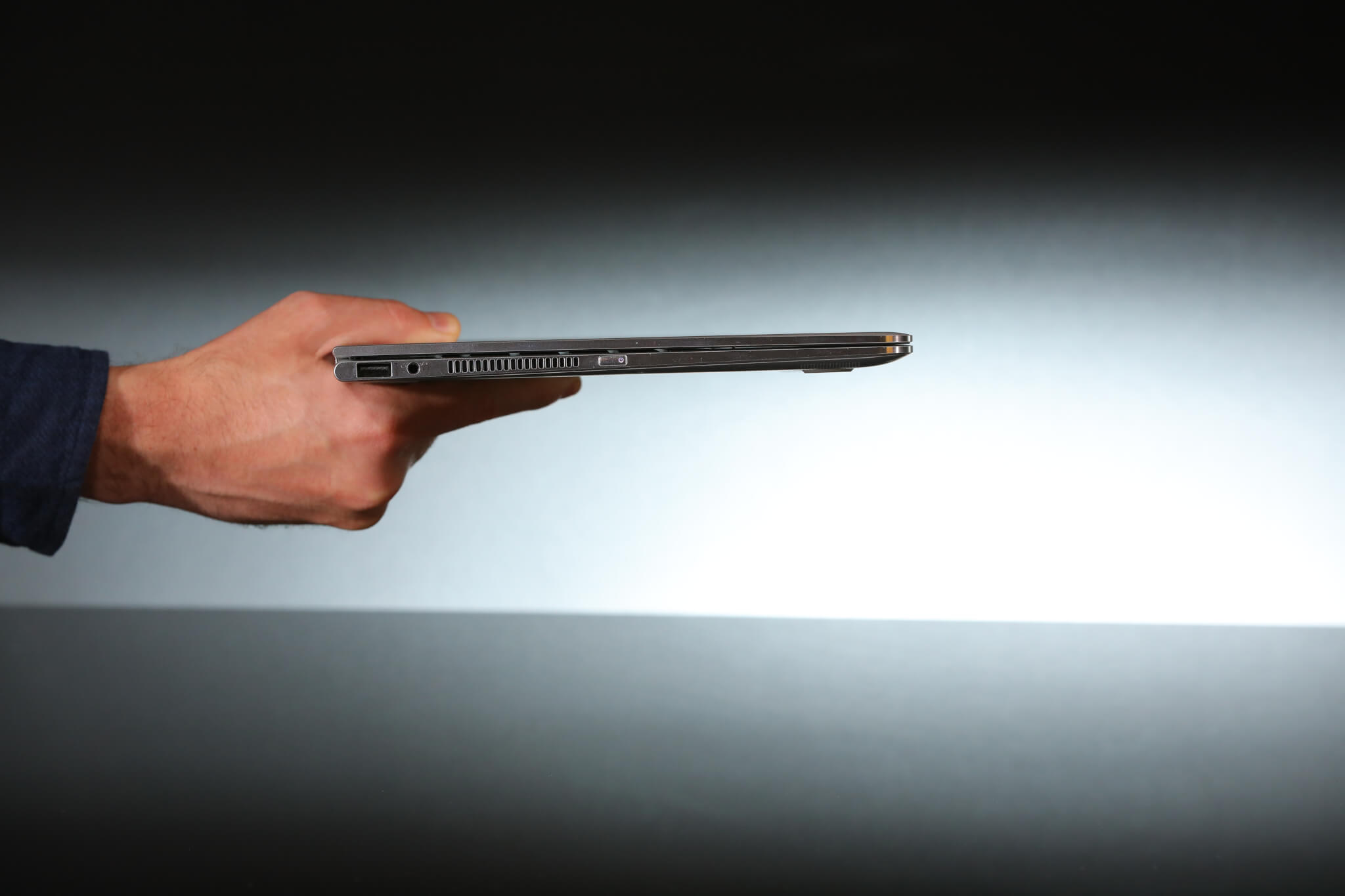 At that weight it’s still hard to use with one hand in tablet mode, but I’ve never been big on doing that with my laptop anyway. With that said, it works well in tablet mode when it’s lying on a flat surface, or when it’s playing video in the tent configuration.

The case is mostly HP’s matte natural silver, while the edges feel glossy. It’s nice but largely unchanged, and I’m fine with that.

The HP logo has also been changed, to the premium one with four parallel lines, both on the lid and below the display. It’s no longer inside a circle, and the full Hewlett-Packard name is no longer spelled out in capital letters.

In addition to getting a smaller footprint, the new 13-inch Spectre x360 has also received a keyboard makeover. Keys cover almost the entire length of the laptop.

Despite being thinner than last year, the Spectre x360 still has a keyboard with decent travel, unlike the MacBook and MacBook Pro, and the keys have light but stiff keycaps. In short, typing won’t feel weird. 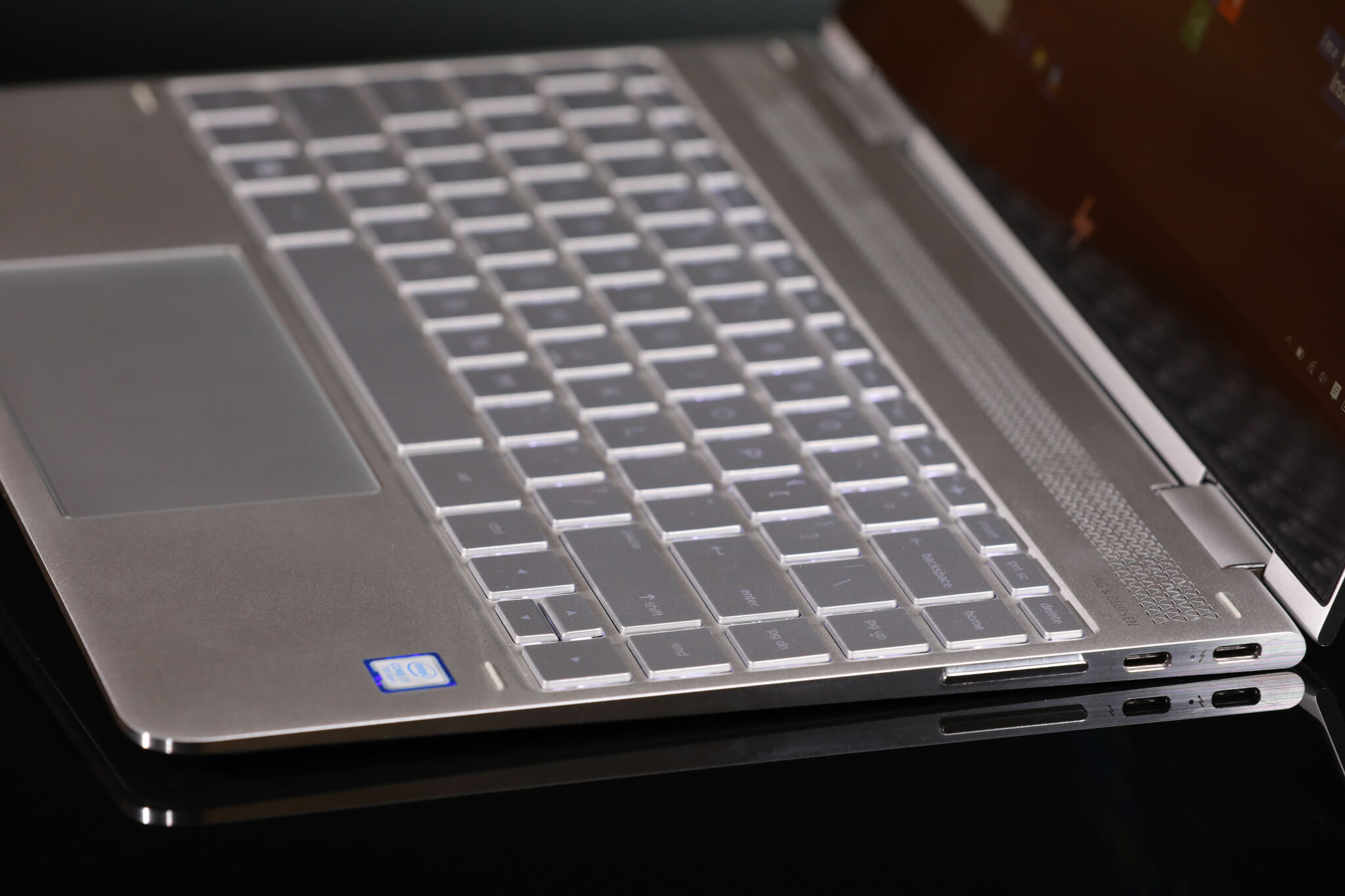 Above: The home, page up, page down, and end keys are on the right side of the keyboard.

The one hang-up I have with the keyboard is the placement of the home, page up, page down, and end keys. They’re on the right edge of the keyboard, and even after using this laptop for weeks I still hit the wrong key by accident when I want to hit enter, shift, or backspace.

The trackpad remains generously sized, but now that I’ve used the new MacBook Pro, I’m afraid I’ve been spoiled; I wish the Spectre’s trackpad were bigger.

The 1920×1080 Full HD display shines bright and generally looks neat. But it’s not as impressive as the one you find on the new MacBook Pro. It could be a little clearer.

A 4K Ultra HD version isn’t available on this laptop at a time when more 4K content is coming out. Lenovo’s convertible Yoga 910 laptop is available with a 4K display. But a more demanding display can eat up battery, and so you could understand why HP didn’t want that to happen here.

One thing that irked me about this PC’s display is that you can’t lower the brightness beyond a certain point. I found the lowest setting too bright to use comfortably in a darker setting.

While you can use your finger on the display to navigate on this laptop, you can’t use a stylus.

Altogether, performance on this laptop is very good for a variety of tasks, including web browsing, light gaming, and video playback.

Unlike Apple’s MacBook Pro laptops, the HP is available with a 7th-generation Kaby Lake Intel Core i7 chip, just like Lenovo’s Yoga 910. The HP also comes with a minimum of 8GB of LPDDR3 RAM, a 256GB solid-state drive (SSD), and an integrated Intel HD Graphics 620 graphics processing unit (GPU). (The model I tested, with 16GB of RAM and a 512GB SSD, has a $1,300 starting price.) 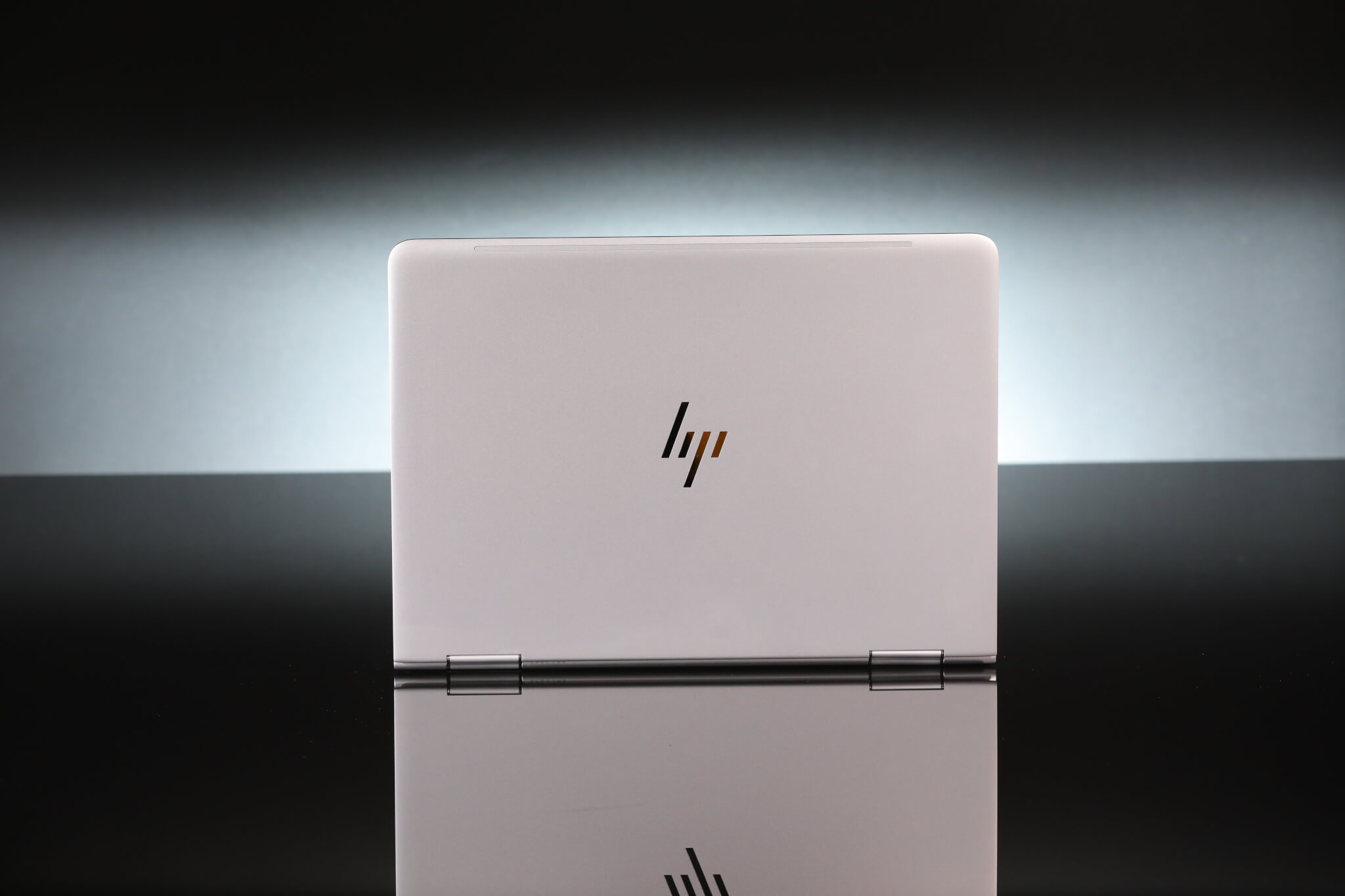 Above: The lid features the new premium HP logo.

But the laptop can get warm while you’re browsing the internet or installing a large program. And it’s not unusual for the fan to run powerfully enough that you both feel and hear it — a problem that plagued HP’s Spectre 13.

HP promised up to 15 hours of battery life on this laptop, 25 percent longer than its predecessor. Unfortunately, I couldn’t get it to run that long. Four to seven hours is more typical. So you can see why a 4K display might not have been the best choice for this machine.

It’s nice to have a USB-A 3.0 port onboard, along with two Thunderbolt 3-compatible USB-C ports and a headphone jack. But HP has done away with the SD card reader, Mini DisplayPort jack, and HDMI port that came with last year’s models.

It’s not hard to use all three ports at once — as I write this, for example, I’m charging, using a corded mouse, and typing on a corded keyboard — and it’s likely you’ll need at least one or two dongles just so you can use multiple peripherals simultaneously.

Audio sounds better on this laptop than it has on any other HP laptop I’ve tested. There are four Bang & Olufsen-tuned speakers, and they are loud.

All things considered, this is a very good laptop, one that I’d say people should consider if they’re not happy with Apple’s current line of laptops or their older Windows PC.

While the changes in connectivity may irk some people, I think HP’s decision to slim down the laptop was sensible. What you have is something refined, not something that looks unnecessarily bulky and uncomfortable.

And the high-end version I tested costs $500 less than the 13-inch MacBook Pro with Touch Bar. Just saying.