For the uninitiated, SwiftKey enables users to type more quickly on touchscreens — it learns your writing style over time and serves up “next word” suggestions accordingly, though it also boosts its predictive typing smarts by scanning texts from third-party sources, learning common word-order sequences. The app recently switched to a neural network-based approach to offer better word predictions.

The company used to monetize on Android by offering a free version of the app for a limited period of time before charging $4 to unlock the service forever. In June 2014, the app was made permanently free ahead of its arrival on iOS, and instead the company started monetizing through a store where you could buy premium themes to spruce up the keyboard. SwiftKey eventually expanded premium themes to iOS too, but in the wake of its acquisition by Microsoft earlier this year, it seems that the need to monetize the app directly became less of an issue. 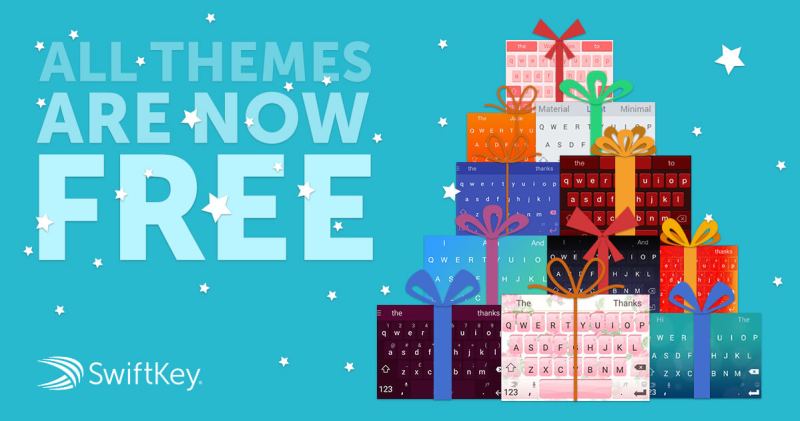 It’s worth noting here that SwiftKey has other ways of monetizing beyond in-app purchases — it carries out research into artificial intelligence, machine learning, and natural-language processing (NLP), and it offers a software development kit (SDK) for third parties that lets them embed SwiftKey’s smarts into their own services. The company famously teamed up with physicist and cosmologist Stephen Hawking back in 2014 to help him type twice as fast.

Given the timing of today’s news, and the clear Christmas-themed slant to its messaging (see picture above), we asked SwiftKey whether its removal of paid-for themes was a short-term promotion, or here for the long-term. The company wouldn’t commit to an answer, but seemed to suggest that it was likely a permanent move. Certainly, under the wings of one of the world’s biggest technology companies, Microsoft, it would be surprising if the themes weren’t kept entirely free moving forward.