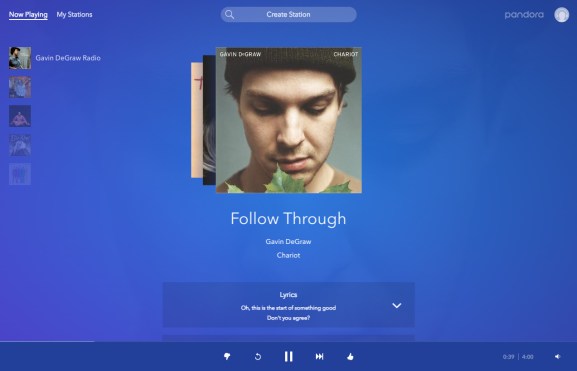 The new look of Now Playing in Pandora.

Pandora may have been pushing to reinvent itself in recent months, but reports emerged earlier today that the internet radio company is keen to sell itself.

A CNBC report this morning cited “people familiar with the matter” as stating that the company was open to being acquired by SiriusXM; however, Reuters quickly countered those claims by stating that Pandora was making “no new effort to sell itself,” and that it was still “focused on executing its strategy and its operating model,” according to sources.

Whatever the truth of the matter, Pandora’s shares spiked on the news that there could be some renewed interest in the company. They hit a high of $13.13, representing more than a 12 percent rise on yesterday’s closing price and a two-month high for the Oakland, California-based firm. But they then dropped and rose again to around $12.60. Still, it’s a long way off its $37 peak in March 2014, and it’s even less than its $16 IPO price of 2011, but it’s still up on its year-to-date low of around $8.

Launched in 2000, Pandora is available in the U.S., Australia, and New Zealand, and it differs from on-demand music-streaming services such as Spotify in that it lets you listen to personalized music stations built around a song, artist, or genre, rather than letting you select specific songs or albums.

Regardless of what the rumor mills are saying, Pandora has being going all out to reinvent itself over the past year. Back in March, Pandora cofounder Tim Westergren became the new CEO as part of management makeover, shortly after reports emerged that Pandora was working with Morgan Stanley to find a buyer. However, the company later affirmed that there were absolutely no plans to sell the company. “We are on a path to do something big,” said Westergren.

The company later launched Pandora Plus, an “enhanced” version of its $5 monthly service, with plans afoot to launch an on-demand subscription offering by the end of the year. Pandora also hired former Apple and LinkedIn marketer Nick Bartle as its new CMO, before introducing a rebrand with a new logo and an overhauled web music player.

On the surface, these recent actions aren’t one of a company seeking to sell itself, but an alternative interpretation is that it’s looking to make itself more appealing to suitors. SoundCloud too launched an on-demand music subscription service this year, and it too is reportedly seeking a buyer.

Pandora’s shares may have enjoyed a spike today off the back of fresh acquisition reports, but the bottom line is its shares are way down on their historical value and IPO price, and an exit to a rival or a bigger company may be its only way out.