The director of Station F announced today that the ambitious $265 million startup campus in Paris will open its doors in April after two years of construction and amid enormous hopes that it will deliver a shot of adrenaline into France’s tech economy.

Director Roxanne Varza also revealed for the first time the details of Station F’s partners and what will be happening at a place that boasts it will be home to 1,000 startups. The renovated historic train station will have three sections: a space with 3,000 desks for startups; an event space for conferences and meetings; and a retail zone for the public that will include four kitchens and a bar open 24 hours a day.

The mix of tenants will also include venture capital firms, a FabLab hacker space, and corporate partners such as Facebook and Vente Privee. As part of the project, Station F is also redeveloping two nearby buildings that will offer subsidized housing for 600 people who are in some way connected to the campus.

Even though the Paris tech scene has come a long way in the two years since the project was announced, Varza said the goal largely remains the same: to create a place that offers a center of gravity for Paris entrepreneurs while making a larger statement about France’s startup ambitions to the world.

“We’ve approached it as creating an entire ecosystem under one roof,” Varza said. “This clearly puts Paris on the map for startups. We are the largest startup campus in the world.”

The project is being almost entirely funded by telecom entrepreneur Xavier Niel, with the City of Paris contributing some infrastructure around the building. The maverick billionaire has spent $265 million of his own money on Station F and the housing project. Niel is also the financial backer of Ecole 42, a free and innovative coding school in Paris. And he’s also the founder of the Kima Ventures fund, which has become one of Europe’s most active startup backers.

Back in 2014, Niel announced he had acquired the rights to Halle Freyssinet, a historic railway station that had fallen into disrepair. He declared it would be home to 1,000 startups, and in 2015 he hired Varza, formerly of Microsoft Ventures and before that a writer at TechCrunch, to lead the effort.

Now dubbed Station F, Varza said they have begun referring to the site as a campus to reflect the multitude of activities and the diversity of people who will be housed in its three floors that cover 34,000 square meters.

Ventech’s role illustrates the kind of interaction Station F is hoping to foster among its members. The venture firm announced today that it will launch a new program called ParisPOC. The initiative is designed to attract companies around the world to expand into the French market by allowing them to test their products and services first. The Ventech office in Station F will be designed to give companies access to other partners and startups based there to be the testers and offer feedback.

Audrey Soussan, a principal at Ventech, said that in the wake of the Brexit vote last summer, her firm believes Paris has a chance to attract companies thinking about international expansion but that typically look to London first. Soussan said she also believes Station F will have a big impact on startups already in France.

“It will disrupt totally the French ecosystem,” she said. “Today the ecosystem is quite fragmented.”

The public retail space will include four restaurants and a bar that will be open 24/7. The event space will include an auditorium for 360 people, meeting rooms, the FabLab operated by TechShop, and public services like a post office. While Facebook will be part of the campus, its exact role will be announced at a later date, as will additional partners who are in talks with Station F.

In the section dedicated to startups there will be 3,000 desks, and the layout will be flexible as various startups arrive, grow, and leave. Station F itself won’t be involved in things like offering mentoring, advice, or incubator-type programming. The cost will be about $206 per desk per month. Varza said that while Station F will operate like a business, the various prices for participating or renting space are set to cover costs rather than generating profits.

Station F has already started accepting applications for startups. The idea overall is that the startups will offer each other support, advice, and mentoring, rather than having a formal accelerator program with classes or matches. Station F will be relying on a network of entrepreneurs to help select the best startups for the space.

“About 90 percent of problems entrepreneurs encounter can be solved by other entrepreneurs,” Varza said. “We’re not doing any babysitting or any bullshit mentoring. We’re putting resources at their fingertips.” 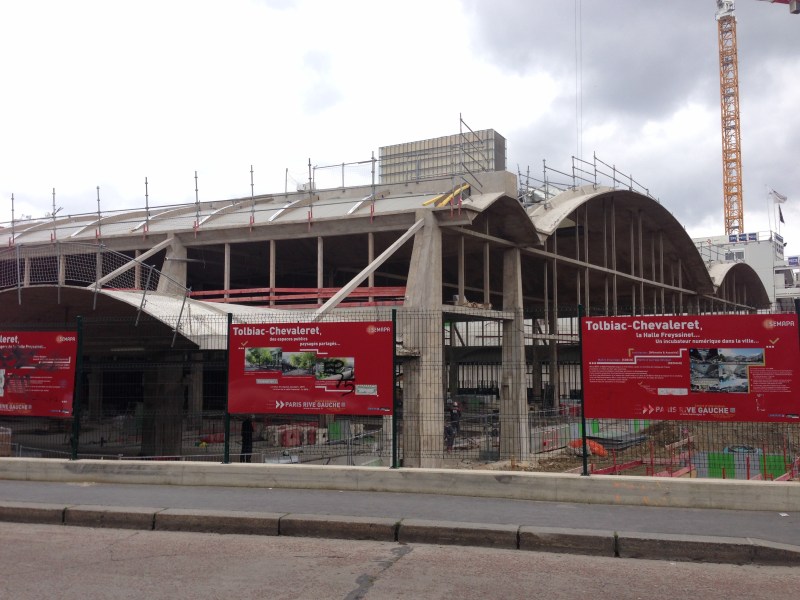