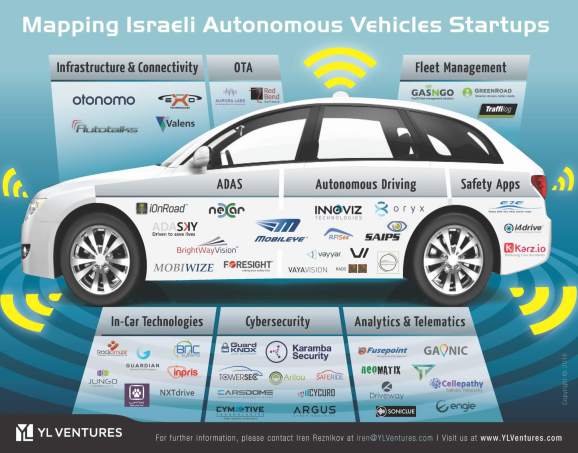 Israel has no indigenous auto industry, but the country’s startup community is serious about autonomous vehicles and is producing a whole host of technologies to help make self-driving cars ready for market, as the infographic above shows.

And the automotive industry is taking note. Five of the companies in the infographic have been acquired already. TowerSec, iOnRoad, and Redbend were acquired by Harman International Industries, which Samsung just agreed to buy for $8 billion – the South Korean company’s largest acquisition to date. Ford Motor Company purchased SAIPS in August 2016. And navigation and infotainment supplier NNG picked up Arilou Technologies over the summer.

Fully autonomous vehicles are expected to become commercially available between 2020 and 2025. On September 19, U.S. auto safety regulators released the Department of Transportation’s Federal Automated Vehicles Policy, effectively giving tech companies and automakers a greenlight to eliminate human supervision over autonomous vehicles. Predictably, safety is a sticking point. The guidelines include a 15-point safety checklist that mentions Data Recording and Sharing, System Safety, Vehicle Cybersecurity, Object and Event Detection and Response, and so on.

What Israel is producing are technologies that will help automakers meet those guidelines.

Why don’t the tech giants and automakers just build this technology themselves? The truth is that too few people can do it. Udacity CEO Sebastian Thrun argues that Uber acquired Otto and GM purchased Cruise for talent. If that’s so, they value autonomous vehicle technologists at roughly $10 million per head.

Universal military service provides Israel’s talent pool with an edge in autonomous vehicle innovation. Some of Israel’s elite military units give members the equivalent of an Ivy League STEM education with hands-on experience in remote sensing, computer vision, cybersecurity, and embedded systems. So when these technologists hit the private sector, they are uniquely prepared to launch autonomous vehicle startups.

Here are the key categories where Israeli startups are excelling:

Infrastructure and connectivity. Autonomous vehicles need to communicate with each other as well as with smart road infrastructure, devices, pedestrians, car manufacturers, and the Internet in general. From a safety perspective, vehicle-to-everything (V2X) communication adds redundancy in cases where autonomous driving sensors fail. The Autotalks V2X chipset epitomizes this technology.

Otonomo, another player in this category, is creating an ecosystem of in-car services and applications that would facilitate data sharing among vehicles, infrastructure, and drivers. Otonomo would enable numerous safety applications. It could also create for connected vehicles what iTunes provided for the iPhone: a marketplace of digital goods and services.

Redbend, soon to be owned by Samsung, leads the way in OTA. GM, Renault, Volvo, and several automotive suppliers already use their technology to update connected cars.

ADAS and autonomous driving. Intelligent navigation technology began with advanced driver assistance systems (ADAS). They can detect cars in your blind spot or parallel park, but they don’t cut it for a fully autonomous vehicle that has to make decisions instantaneously. That is why Mobileye, the established ADAS leader, is now transitioning towards autonomous driving.

Nexar, maker of smartphone-based dash cams, might make a play in this category too. Currently, they collect footage of reckless driving behavior. On the backside, their image and video processing technology can uncover the patterns that cause accidents. That data could serve other companies or enable Nexar to develop superior ADAS and autonomous driving systems.

Don’t expect one technology to beat out all the others – this isn’t an iPod versus Zune scenario. Different sensing technologies perform better depending on weather, light, and other uncontrollable conditions. Autonomous vehicles will most likely combine various sensor technologies to overcome safety hurdles. M&A activity, partnerships, and integrations seem inevitable in this space.

Cybersecurity. In connected cars, white-hat hackers have managed to disable breaks, jerk steering wheels, and shut down engines remotely. Autonomous vehicles will be vulnerable to these same exploits. In the worst case scenario, hackers may execute a “Zero Day” attack in which they target thousands or millions of vehicles all at once to cause maximum damage.

TowerSec, soon to be under Samsung’s wing, was one of the first companies in this space. They approached autonomous vehicle cybersecurity in an enterprise framework, adapting IDS/IPS (Intrusion Detection & Prevention Systems) technologies that protect IT networks. Newer players like Karamba Security seal ECUs according to their factory settings and block any intrusions or in-memory attacks that don’t comply with those settings [Disclosure: Our firm, YL Ventures, is an investor in Karamba].

Are we there yet?

The transition from semi-autonomous to fully autonomous vehicles is near, but we are not there yet. Israel’s autonomous vehicles startups, fueled by military expertise and a vibrant tech ecosystem, have built businesses out of the remaining technical hurdles. Via this side road, Israeli startups can help to satisfy the U.S. government’s safety concerns and meet the functional requirements of mass automated transportation. Tesla, Google, Uber, and the traditional automakers will tap into Israeli expertise to reach the finish line as fast as possible.

Yoav Leitersdorf is Managing Partner at YL Ventures, Ofer Schreiber is a partner, and Iren Reznikov is an analyst with the firm.