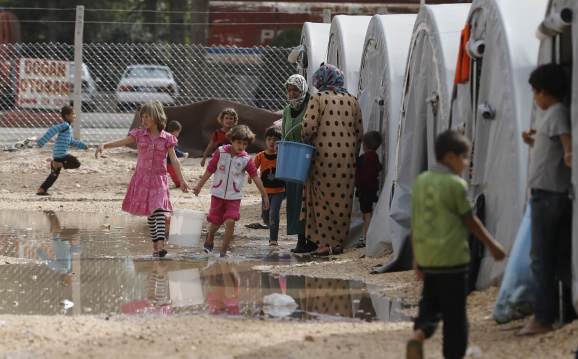 Syrian refugees at their tents in a refugee camp near Suruc district, Sanliurfa, Turkey, 14 October 2014.

Blockchain isn’t just for fintech. Several organizations, such as Bitnation, are using it to assist those in dire need, such as refugees and victims of human trafficking.

According to the UN Human Rights Council figures, 65 million people are currently displaced. That’s one in every 113 people in the world. The human trafficking industry is just as unnerving, with an estimated 20-30 million slaves throughout the world. As many as 800,000 people are trafficked across borders each year, and the illegal industry has annual profits of an estimated $150 billion. These figures are shocking.

One issue that both of these groups face is that they lack proof of identity. Those fleeing war-torn countries may lose their documents or have them stolen or destroyed. The IDs of human trafficking victims are regularly confiscated so that their captors can keep them powerless. Proof of identity is vital to those seeking asylum, as well as those who have been trafficked across borders. Without documentation, human trafficking victims and refugees are often trapped in horrible situations.

Many citizens of developing countries are also undocumented, particularly if they live in isolated areas. On paper, they simply don’t exist. Lack of government services in these places has led to UNICEF estimating that one in three children under the age of five is undocumented. Although a great proportion of these people receive documentation when they get older, there remain significant numbers of people who don’t exist in a legal sense. This excludes them from important services such as banking.

On the other hand, we hear that some migrants get rid of their papers so they can pretend they are legitimate refugees. Al Jazeera reported in 2015 that up to one in three refugees claiming to be Syrian were actually from somewhere else. These economic migrants put extra strain on essential services and infrastructure, limiting the support that can be given to those who are fleeing warzones or other disasters.

This is where blockchain and digital identities come in. Someone may no longer have their physical identity, but if they could prove who they are by digital means, authorities and relief organizations would have a more secure and efficient way of processing them.

Blockchain is an excellent solution because it can create records that are decentralized and cannot be changed, and it allows for granular control. Using blockchain for identification also means individuals don’t have to trust a government or organization with all of their identity data, and it gives them the ability to partition that data.

Several organizations are proposing a common ledger for digital identity based on blockchain technology. These databases would allow immigration authorities to verify a person’s identity and also their biometric data in a way that cannot be tampered with. Because of the transparent and granular nature of blockchain, it would also allow refugees to only give up the necessary information for verification and nothing more. Having the entirety of your digital identity accessible to all would be a huge privacy concern.

Following the immensity of the Syrian refugee crisis, Bitnation (a blockchain-based virtual nation) stepped up to try and develop an emergency ID that allows family members to verify each other’s relationships. Although Bitnation Refugee Emergency Response has only had limited success, much of this is because it was developed in reaction to the crisis rather than beforehand. Regardless, it shows the immense potential of this kind of technology and provides an example of how it could help refugees with their identities.

Although Bitnation may be one of the first to specifically target refugees, several other blockchain-based digital identity organizations could help refugees, including OneName, ShoCard, and uPort.

The harrowing statistics show that there is a clear need to solve the identity crisis for refugees and human trafficking victims. While blockchain has the potential to address these issues, the technology is still young and lacking support. It needs to be further tested and receive greater funding before the systems can be implemented on a wide scale. Only then will it be able to help the people who need it most.