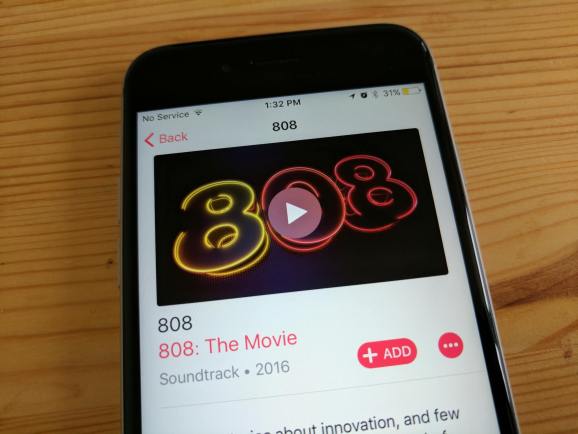 The release of 808, a documentary about the limited-production Roland TR-808 Rhythm Composer, sheds light on Apple’s continuing selectivity about the original video content that it releases through its Apple Music streaming service. It illustrates just what Apple is trying to achieve when it comes to music, and content in general.

Yes, the 92-minute documentary, which came out on Friday, is engaging on its own. It could have popped up anywhere — Amazon, HBO, Netflix, or some other video hub — and made for interesting TV. It even has a wonderful twist at the end.

But it also does things that are strategically important for Apple at a time when it’s keen to make Apple Music more popular than Spotify and ensure that Pandora’s newly launched premium streaming service can’t catch up. (At last check, Apple Music had more than 20 million paying users.)

The video can bring new interest to existing Apple Music library content, across multiple genres. The subject matter of the documentary, the 808, has been used to produce hip-hop, funk, and dance and electronic music. Sure enough, Apple Music now stocks a playlist of songs from 808.

The movie includes commentary from several prominent music figures, including Afrika Bambaataa, Lil Jon, Questlove, and the Beastie Boys’ Ad-Rock and Mike D, as well as people who have supported stars, such as Marvin Gaye’s audio engineer Mike Butcher and Public Enemy producer Hank Shocklee. These appearances reinforce the notion that Apple remains at the center of the music conversation for artists and insiders.

Directed by Alexander Dunn and produced by You Know Films in association with Atlantic Records, the movie even promotes some friends of Apple Music. Mike D produces “on-demand” episodes for the service. Diplo, whose artist collective Major Lazer regularly produces episodes, offers his thoughts on the 808, as does Pharrell Williams, who runs the OTHERtone show. The narrator of the documentary is none other than Zane Lowe, one of the key anchors of Apple Music’s Beats 1 radio.

Many shots in the movie just happen to show Macs in the background. This cements the notion that professionals and creative types still rely on the Mac. It’s good timing, given the recent criticism of the new MacBook Pro. (The film’s publicist says Apple only licensed it and did not place people or products in it.)

And, of course, this thing is only available on Apple Music. So if you’re into electronic music, or music hardware, you’ll want to sign up for Apple Music or renew your subscription. Personally, this is more relevant to my music interests than the two-hour documentary on Taylor Swift’s 1989 tour that came to Apple Music last year. And while I don’t expect to like Apple’s upcoming TV shows about apps or James Corden’s Carpool Karaoke sessions as much as I like 808, those are sure to attract certain audiences in their own right.

If this were Apple’s perfect world, there would already be an Apple video subscription streaming service for the Apple TV that would really give Netflix a run for its money. But, for one reason or another, we’re not there yet. So Apple isn’t going full-bore on video production yet. It has taken its time and made something that’s in its best interests. Perhaps this release will turn out to be a prototype for music-oriented content that Apple will pump out on a regular basis.

Update on December 14: Added references to You Know Films and Atlantic Records and comment from the film’s publicist.