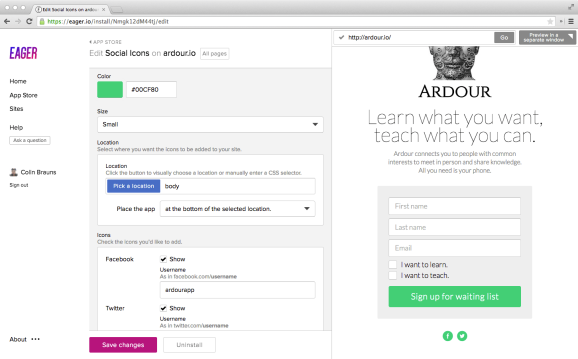 Cloudflare is making moves to beef up its app store by acquiring Eager Platform. Cloudflare will integrate its newest purchase to help its customers make their web properties not only more secure, but more powerful and scalable from a monetary standpoint.

Financial terms were not disclosed, but Eager’s four employees will remain and will work out of the Cloudflare office in Boston. The service itself will be fully sunset next quarter — the process is beginning today, but Eager apps previously installed on websites will continue to function “indefinitely.” Eventually, the service will be replaced by an updated Cloudflare Apps platform that’ll launch in the middle of 2017.

“Eager has built a high-quality product for both developers and web property owners, that, when integrated with Cloudflare’s vast network, will make adding applications drag-and-drop simple,” said Cloudflare chief executive Matthew Prince. “Together we’re democratizing access to internet tools to help our users accomplish things that were impossible before.”

Founded by former HubSpot executives Adam Schwartz and Zack Bloom, Eager sought to reinvent how projects and apps were installed. It’s not easy for website owners to configure and install apps, so in 2014, the company was formed to develop a place where apps and libraries could be found and easily installed by anyone. The team took their mission to the industry, advocating for a standard around app installation so that people could get projects done easily.

“The way tools are installed onto websites hasn’t changed since the inception of the web twenty years ago,” said Schwartz. “It still often requires copy-pasting code into web pages, in a way inaccessible to the vast majority of small and medium-sized businesses.”

As part of Cloudflare, the Eager team will focus on upgrading Cloudflare Apps, a service that launched in 2011 and centers around making web application installations “fast, safe, and one-click simple.” Schwartz told VentureBeat that “for the first time” it will be possible for non-technical website owners to tap into Software as a Service (SaaS) and open-source tools that technical people use every day.

“The new Apps platform will allow Cloudflare to deliver new, powerful functionality to customer internet properties on top of the performance, security, and reliability benefits already enjoyed by Cloudflare’s customers,” he continued. “All website owners, even those who don’t yet use Cloudflare, will be able to view a listing of apps and preview them live on their sites. Cloudflare customers will then be able to install these tools easily in seconds. This makes it possible for every Cloudflare customer to gain access to tools that previously were only available to developers and the largest enterprises.”

In a way, the idea is to provide an opportunity for developers to further distribute their apps and plugins to more sites. However, companies and website owners who aren’t technically proficient may find themselves too scared to make the move — either because they don’t have the know-how or out of fear of problems with a virus or hacking. Cloudflare Apps could be the bridge, guaranteeing that apps are safe to install.

But getting more apps built for its ecosystem requires some outreach on Cloudflare’s part. So the company plans on holding hackathons, and publishing resources and case studies next year. Developers will be able to check out the new Cloudflare Apps in a preview next quarter, with apps launching on the platform in Q2.