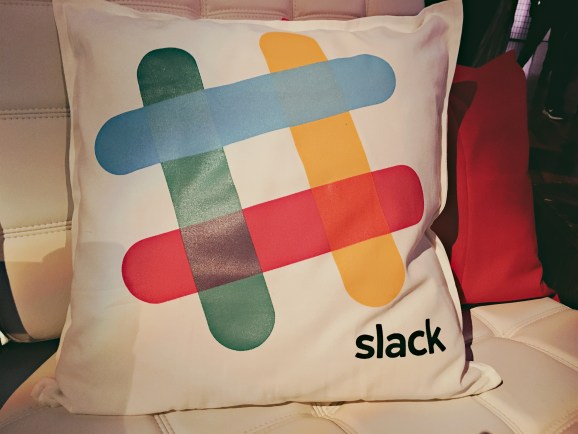 Slack pillows on display during a company event.

Slack has launched a new way for you to communicate with colleagues, with the addition of video calling. Now you can not only message team members, but also call and now video conference, either one-to-one or group video calling. But there’s more to just seeing someone’s face — you can also include emojis within your chat, such as a hand raise if you want to ask a question, a thumbs up to express your approval, or anything else.

“Making calls within Slack, whether voice or video, can be helpful at times when a face-to-face conversation is needed, like when you want to give someone feedback or have a one-on-one discussion with a teammate in another office,” the company wrote in a Medium post.

Video calling is rolling out over the next few days, but won’t be available for all platforms — you’ll receive all the features with Slack’s Mac and Windows desktop apps and also on Google Chrome, but if you’re on mobile, you can join video calls but can only share and receive audio.

Extending into video is a natural thing for Slack, especially since if it’s centering itself as a productivity platform, it needs to offer ways for colleagues to collaborate besides text-based messages. In June, voice calling was introduced, and now at the end of the year, the full spectrum is now supported. Obviously in doing so, Slack is seeking to streamline the workflow teams go through, likely trying to keep you in its apps for much longer periods instead of having to jump to a third-party service.

Some may wonder whether this will affect the likes of Skype, Google Hangouts, and other conference calling services. But Slack has presented a front that it wants to play nicely, explaining that you can make voice and video calls through third-party services without using Slack’s default offering.

One thing that hasn’t been mentioned is screen sharing, but it’s possible that this feature could be added in the future. In January, the company acquired Screenhero with the intention of integrating the screen-sharing service into its offering. It’s likely going to be a highly requested feature from those who use video calling extensively.

But if you want to spice up your video calls, one thing you won’t have to worry about is the lack of emojis. Slack is enabling support for several of these creations, meaning that not only can you respond to messages with them, but also live calls. When used, these reactions will be briefly displayed over your video and have a subtle sound — think of them like the reactions that you have in a Facebook Live broadcast. The intention is to show those on the video call that you have some feedback you’d like to provide.

There are also “props” that you can affix to your video, such as placing a lightbulb above you to signify you just had an idea, and more. Slack certainly doesn’t want you to think that video calling on its platform is going to be as boring as other services, so it’s bringing out Snapchat-like graphics.

Video calling is open to any Slack user. If you’re on one of the paid plans, teams will be able to have group video calls with up to 15 people.