Facebook is looking for new ways to let you express yourself beyond simply chatting. Within Facebook Messenger, the company has launched a native camera, essentially upgrading the software so the device can do much more. Rolling out globally over the “coming days,” it allows you to apply Snapchat-like filters, emojis, stickers, and other artwork to any photo or video you want.

Every day, more than 2.5 billion emojis, photos, stickers, and videos are shared between the more than 1 billion monthly active users on Messenger. While the app is normally text-based, it has been evolving to include more artistic expression and non-verbal communication, which is why Facebook has updated its app to make sending photos and video faster “and more fun.”

Facebook Messenger now has a redesigned home screen, with the camera shutter button in the bottom center. Tap it to easily capture a moment or long press to record a video. Then things get interesting — you can apply filters, artwork, and effects similar to Snapchat and Instagram Stories. Simply type in a keyword, and the app will display relevant images that can be added to photos and videos. Peter Martinazzi, Facebook’s director of product management, told VentureBeat the company indexed “a lot of the art” in the app so that the right sticker and emojis show up. 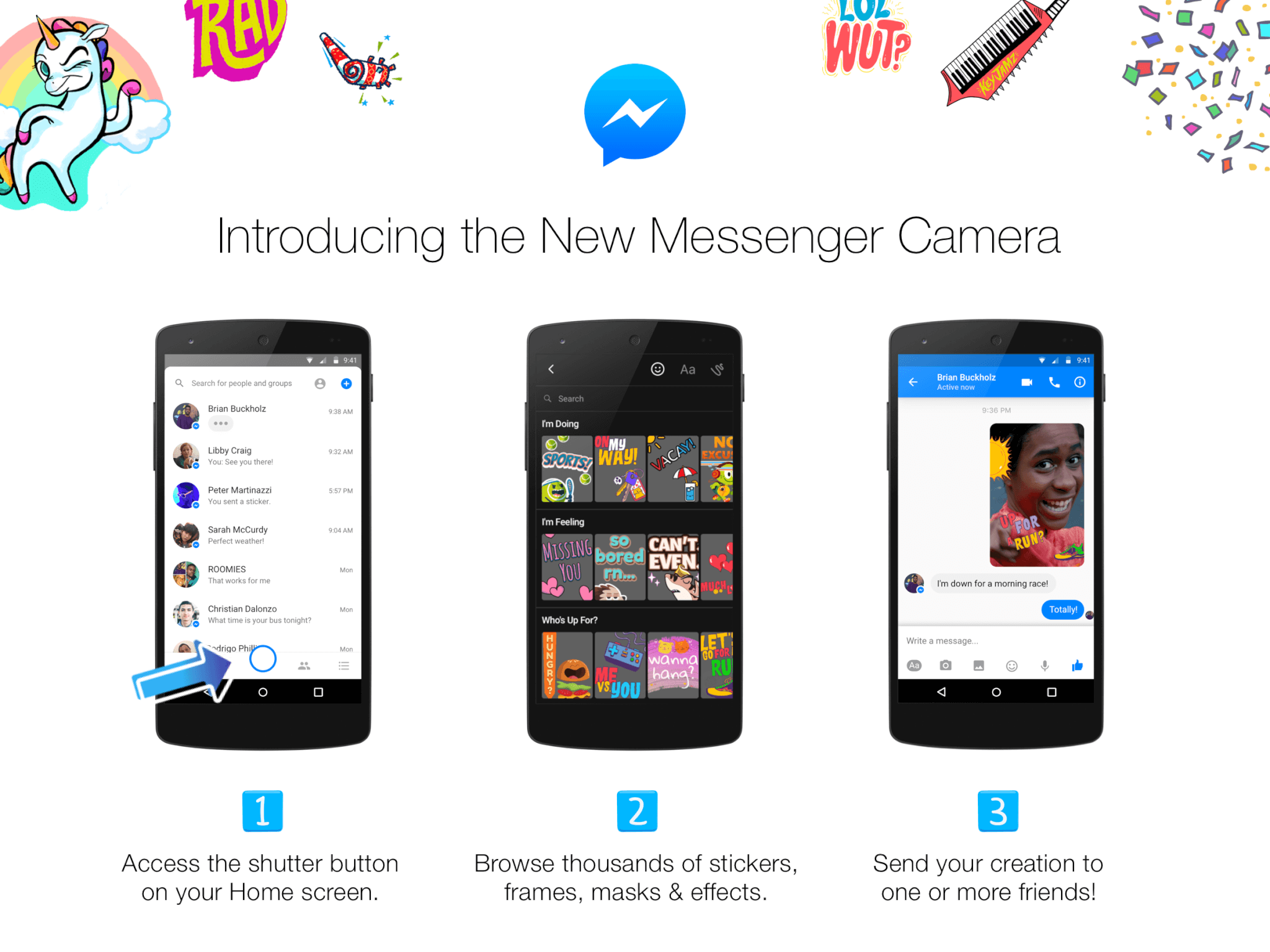 “We have a catalog of thousands of pieces of arts and programmatic ways for them to come together, so whatever you’re trying to say, [we can] help you say it better on your photo,” he explained.

If you type in “coffee,” for example, you might see 20 different pieces of art that you could apply to your photo. You can add as much artwork as you want, regardless of whether the photo was taken with Facebook Messenger or imported through your camera roll.

There are also frames, masks, and special effects available. Included in this group are style transfers, which are similar to what you’d find in Prisma and which use the same technology as an app Facebook demonstrated earlier this year. You’ll also be able to include filters similar to Snapchat’s to create a custom photo to send to friends for Christmas, New Year’s, or any other special occasion.

You are limited to one effect and frame per photo and video. 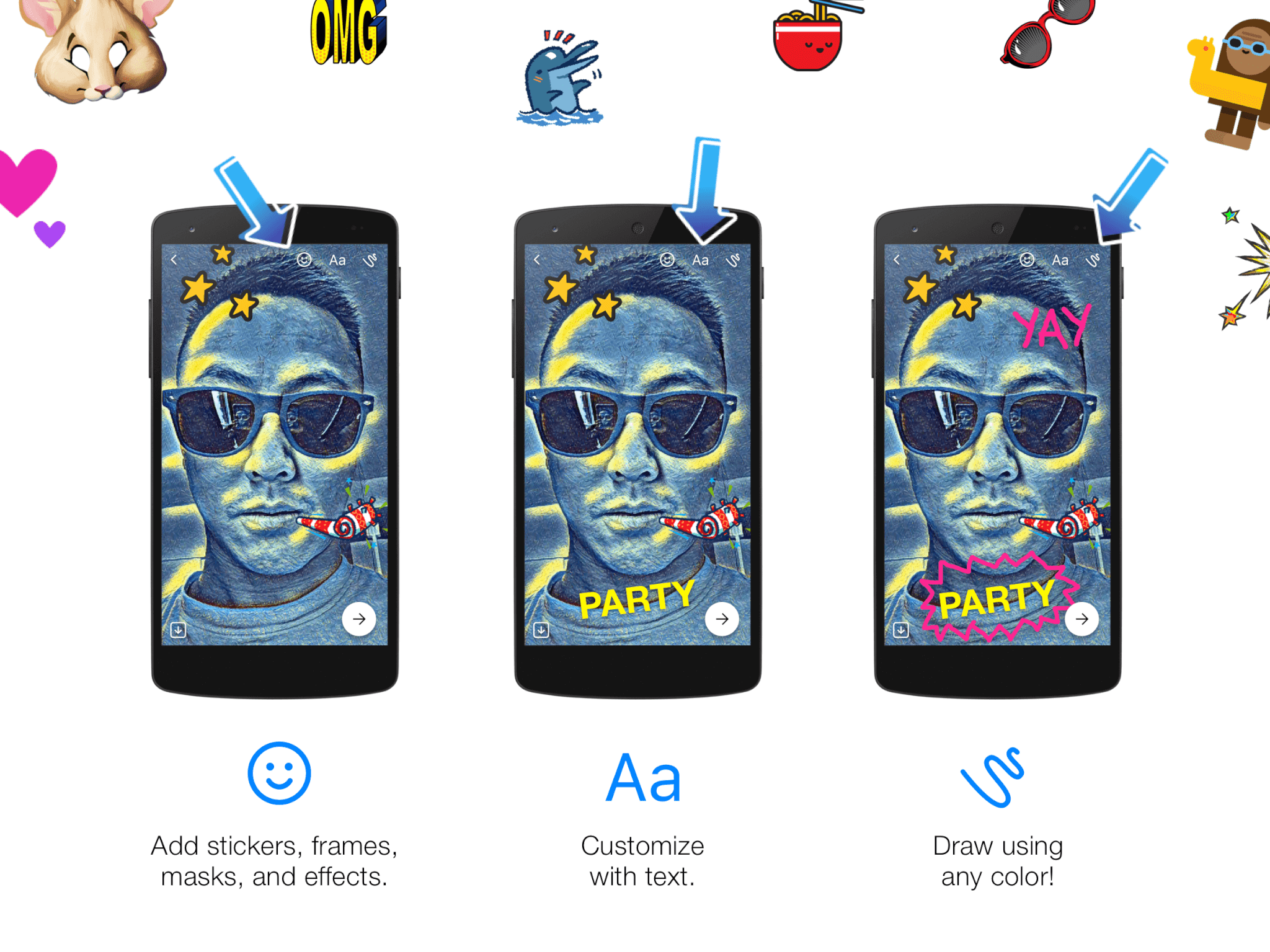 All of the art and special effects are targeted based on your geography and the language your phone is set to. Martinazzi said there are special stickers and artwork that resonate better in specific countries than in other places. Facebook shared that it has collaborated with artists from around the world to create the filters, stickers, and emojis that will now appear in Messenger, with some adding their own personal touches.

Oh, and there’s one other thing: The app also includes a palette icon so you can easily apply a blank canvas to create your own masterpiece.

“When we remove friction to communication, people communicate more,” Martinazzi once told VentureBeat. During our conversation, he shared how people on Messenger were snapping messages and passing them along to their friends, or trying to find new ways to express what they’re feeling. Instead of sending a boring “You want lunch?” text, why not personalize a photo of yourself with a reaction, stickers, and artwork? A picture is worth a thousand words, after all. 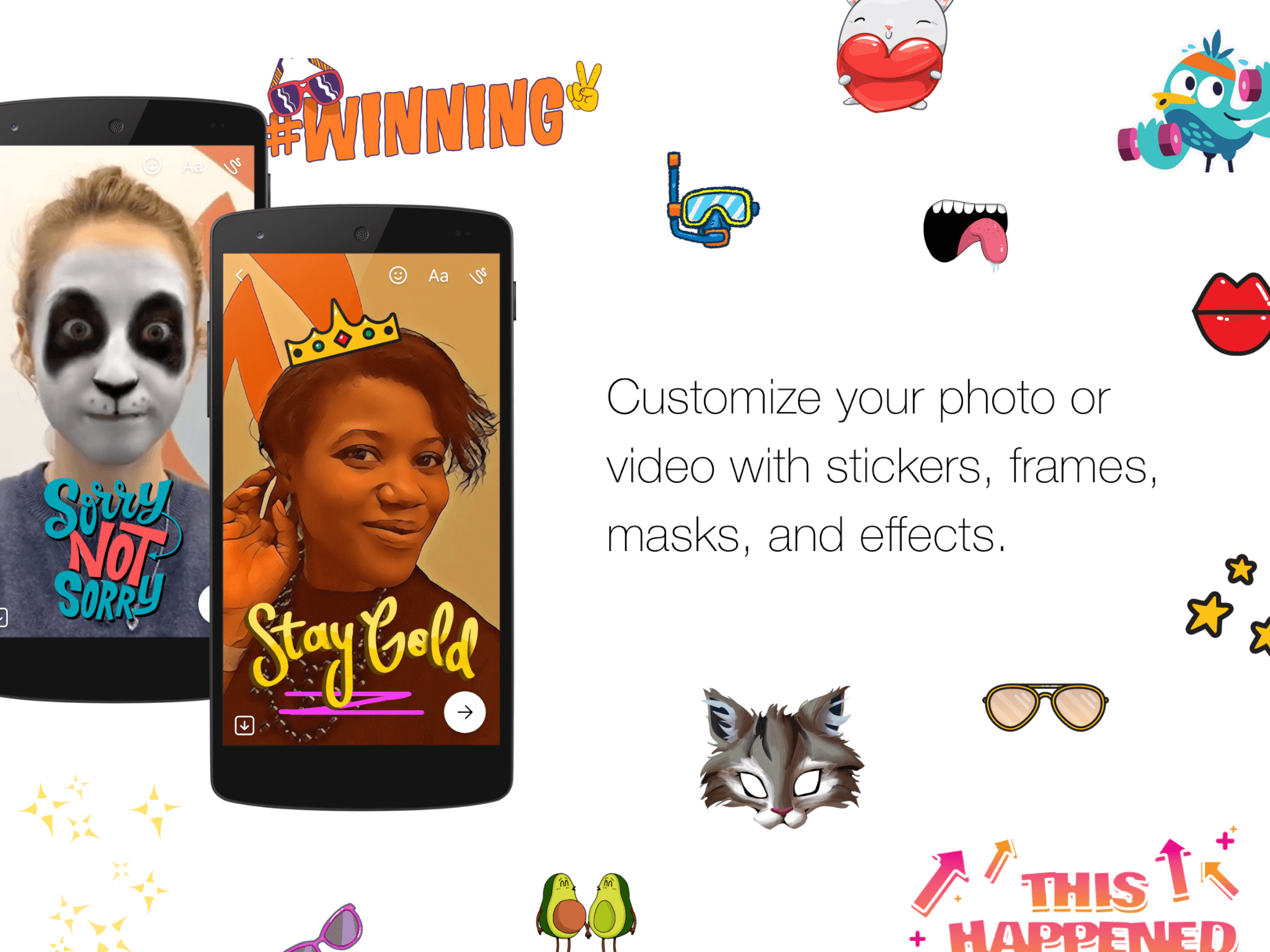 Whatever you create within Facebook Messenger can be saved to your camera roll and edited again — you won’t be able to remove anything that’s there, but you can add more stickers, emojis, and filters. You can also easily forward the images to multiple people. Eventually, Martinazzi said, you’ll be able to edit the images, but that’s not available currently.

All of the aforementioned bells and whistles are available on Facebook Messenger’s iOS and Android apps and will work on photos and video messages, including within secret message threads. However, video calls are not currently supported.