“Disruption” is the buzzword du jour in tech. Every pitch in every coffee shop in Silicon Valley is peppered with the term. Such overuse risks rendering the word meaningless.

But in the weeks since the election, “disruption” has taken on a new and much more profound meaning. Long-standing institutions, treaties, and norms have been disrupted with little clarity as to what will replace them. These disruptions are the electoral result of an American society that is itself being disrupted. Jobs that have formed the bedrock of the American middle class for the last century have begun to disappear and will cease to exist altogether over the next 10 years.

I believe tech is the key driver behind this disruption. And we, the tech industry, have a critical role to play in addressing it.

How tech is disrupting American society

Election data suggest that voters with a high level of economic anxiety voted for the disruption candidate. Specifically, counties with a relatively high proportion of “routine jobs” swung hardest for Trump. These are not necessarily places with low unemployment today but places where people fear their jobs will go away in the future.

Much of this fear has focused on globalization. No doubt many car manufacturing jobs moved overseas over the past few decades. But the reality is that off-shoring is only an intermediate step; the end game for most of these tasks is automation. Indeed, if you visit a modern car manufacturing plant, you’ll see a sea of robots staffed by a dwindling number of people. 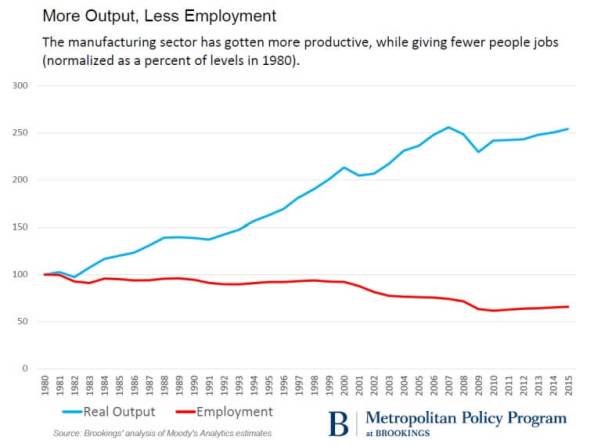 A recent Brookings study illustrates the drastic decoupling between productivity and employment in manufacturing that has been driven primarily by technological innovations.

As technology improves, automation will increase and spread, regardless of Trump’s (or anyone else’s) promises to bring these jobs back. The reality is that the jobs of the future aren’t going to China or Mexico; they’re going to the cloud.

But automation is also bringing tremendous economic dislocation. More tasks in more places are being automated away. Many millions of workers will need to be retrained and repositioned.

I believe Trump’s win was largely due to his effectiveness at tapping into the anxiety this dislocation is creating. And I believe this dislocation is just beginning. For example, self-driving technology is poised to eliminate many of the most common jobs in the country — truck driver, delivery driver, cab driver, Uber driver, etc. This will happen within the next 10 years, and the dislocation and anxiety it will produce will strain our society like few things before.

How can we, the tech industry, work to address the anxieties that our innovations are partly responsible for driving?

What tech can do to help solve the problem

The tech community can use the products we build to begin to address the dislocation we’ve caused. Here are some ideas to get the ball rolling:

1. We can use tech to address the societal communication issues that social media (and real-life geographic) echo chambers have caused. These efforts won’t address fundamental economic dislocation itself, but they are critically important to restoring the dialogue that can. For example, Facebook and Twitter could build tools to expose people to perspectives different from their own. There are similar efforts outside social media like Meltingpot.life, a newsletter that solicits views on all sides of issues to pop the filter bubble.

Another early example of using tech to build empathy is More Perfect Listening, which connects voters with differing political points of view and encourages them to actively listen to one another.

By better understanding the challenges that those living with economic anxiety face, the tech industry can find ways to leverage what we build to help.

2. Tech can retrain and reposition displaced workers. The Obama Administration recently pledged $28 million to help retrain under-employed coal workers. The tech industry can play a critical role in speeding such transitions. For example, DroneDeploy is leveraging its software to help reposition these workers to pilot drones for crop scouting, land surveying, and more with minimal manual training required. [Disclosure: My firm is an investor in the company.]

There are many other opportunities to use the products we build to help retrain and reposition. My colleague Gordon Ritter recently explained how machine learning can be used to help retrain workers at scale via “Coaching Networks.”

I’d challenge entrepreneurs to think through how they can use their products to help.

3. Build vibrant industries across the country. The tech industry is fortunate to enjoy among the highest wages and best benefits of any sector. We need to work to expand the industry and its prosperity across the country in order to reduce anxiety over the long run.

While tech leaders like Google and Facebook have opened offices in a variety of domestic markets, the centers of tech activity are still concentrated on the coasts. The best way to shift this concentration is to support entrepreneurs in non-coastal markets.

Efforts like Venture for America bring high potential college grads to the middle of the country and mentor them in their entrepreneurial journey there. The Stanford Graduate School of Business has launched a fellowship providing free tuition to Midwestern students that take the learnings from their time in Silicon Valley and return home afterward to build local economies.

While VCs still concentrate the vast majority of their investments in a handful of coastal markets, there are signs that this may shift going forward. The Kauffman Fellows Program recently brought 300 VCs from around the globe to Kansas City to discuss tech opportunities in the country’s heartland. Investors like Mark Kvamme have left coastal venture firms like Sequoia to open up shop in the Midwest. My fund, Emergence Capital, recently backed Indianapolis-based High Alpha, a venture studio co-run by ExactTarget’s Scott Dorsey aimed at creating large enterprise cloud companies in the Midwest.

To be clear, there are a variety of hurdles involved in starting and funding companies outside today’s tech hubs. Indeed, in full transparency, I have done little investing outside Silicon Valley myself. I need to spend more time on this.

The tech industry has often had an ambivalent relationship towards politics, but the shock of this election is rousing folks from their indifference. It’s great to see so many friends and colleagues talk through ways to get involved in both politics and non-profits. But I challenge techies to think about how to use our core asset, the things we build and the places we build them, to prevent further economic anxiety and division in this country. The ideas I mentioned above are just a start — I’d love to hear from folks working to tackle this generational challenge and to see how I can help.

Jake Saper is a principal at Emergence Capital.