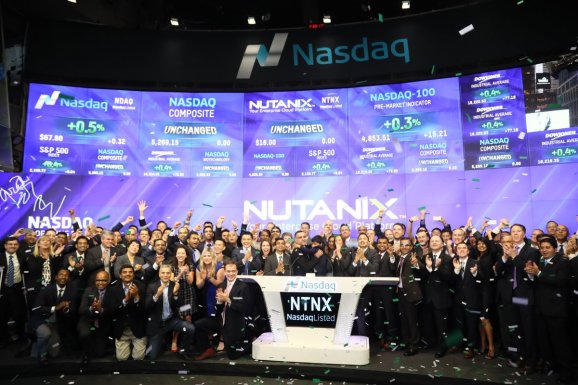 Nutanix celebrates its premier on the NASDAQ on September 30, 2016.

When it came to public offerings by tech companies, 2016 emerged like a corpse and only exhibited the faintest of heartbeats by the end.

Still, it’s worth re-writing the line that we have all written for the last two years: Next year could be much better! And this time, that could actually turn out to be true.

The culprits are those oft discussed. Greater access to late-stage capital is allowing tech companies to stay private longer (cough, Uber, cough). There is a general desire to avoid the scrutiny that comes with being a public company. There is also a feeling that — thanks to unicorn mania — many of these companies are overvalued. And yes, that breeds skepticism among investors with regard to tech IPOs. And then the U.S. election was a distraction.

Still, amid the dry spell, there were some bright spots.

Overall, tech IPOs outperformed all other sectors, providing a 39.8 percent return from their initial IPO pricing, well above the 23.6 percent overall return for all IPOs this year, according to Renaissance. That means that, for the most part, what companies are sneaking out are generally considered to be of good quality. Indeed, four of the top 10 IPO returns came from tech companies:

These performances are just one reason to be optimistic about next year. Solid returns are just what tech needs to rebuild its credibility and get its IPO mojo back. Renaissance is predicting that tech IPO activity in 2017 will increase “significantly.”

In part, that’s because of looming IPOs by Snap and Spotify. Renaissance projects that Snap will file sometime in the next six months and that its IPO could raise $4 billion, at a valuation of $25 billion. Spotify is even more likely to IPO in 2017, thanks to terms of the debt it raised. While Spotify’s IPO terms are less clear, Renaissance points out that just these two companies would likely raise more money than all VC-backed tech IPOs over the last two years put together.

And this also doesn’t include persistent speculation that companies like Uber, Airbnb, Pinterest, Dropbox, Palantir, or WeWork could be considering going public.

However, there are some caveats that could just as easily dampen enthusiasm.

The largest tech IPO of 2016 was Japan’s Line, which raised a total of $1 billion after debuting on the New York Stock Exchange this summer. However, the stock is currently trading at $33.83, as of Dec. 23, well below the $42 per share offering price. Another big one, Dell spinoff SecureWorks, is down about 24 percent since it raised $112 million in April.

The overall IPO pipeline (not just tech) also remains weak. According to Renaissance, 120 companies filed for IPOs in 2016, down by 50 percent from 2015. The number of companies that we know have filed for IPOs is 64, also down about half from this time last year.

And, of course, there is the wildcard of a new administration taking office in late January. Radical changes in policy could either excite markets or spook investors.

If the IPO window doesn’t reopen, some of the larger unicorns could be in the tough position of needing to raise more money from private investors who are growing tired of underwriting their losses and are hoping for an exit.

But, overall, it seems 2017 could the year tech IPOs make a comeback. The real drama may be just how wide that IPO window opens and how many tech companies can squeeze through it.