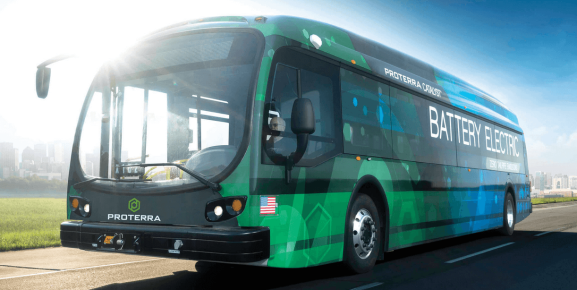 Electric bus maker Proterra has raised $140 million in equity funding from existing investors including Tao Capital Partners, Kleiner Perkins, and GM Ventures, with a number of new investors joining the fray too.

Founded in 2004, Burlingame, California-based Proterra manufactures transit buses that use fast-charging electric batteries that can be replenished in around 10 minutes. And back in September, the company unveiled a more efficient battery system with its new Catalyst E2 series, promising around 350 miles per charge.

The company says that it has so far sold more than 300 vehicles to 35 municipal, university, and commercial transport organizations across the U.S.

Before this latest round of funding, Proterra had raised around $180 million. In terms of the makeup of the new investment, well, it includes $40 million from an “undisclosed investor” and $60 million from “several new investors,” in addition to those who had plowed cash in previously. The new funds will be used to accelerate manufacturing as the company looks to double its production to meet “growing customer demand” across the U.S. Indeed, the company says that it plans to grow manufacturing in its East Coast plant, located in Greenville, South Carolina, by 300 percent.

“The size of the round and the diversity of our investors reflects what we’re seeing around the world as institutions and businesses divest from fossil fuels,” said Ryan Popple, Proterra CEO, in a press release.

Electric vehicles and batteries are ripe for investment across the transport spectrum, with heavyweights such as Samsung making strategic investments and acquisitions. One of the key obstacles preventing electric vehicles from taking off has been the available battery technology, with long charging times and short ranges traditionally serving as deterrents. But as startups continue to innovate, and companies such as Proterra push the envelope in terms of expediting charging times and increasing mileage, the appeal of electric vehicles will surely grow.